History of a Painting: 'Moonlight Night on the Dniepr' by Arkhip Kuindzhi 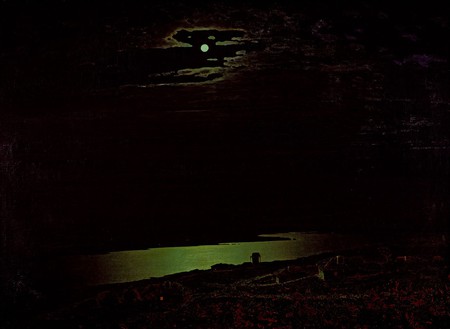 You wouldn’t be wrong if you called this painting the most famous masterpiece of Russian artist Arkhip Kuindzhi. The art piece, which has always had a truly mesmerizing effect on the public, became legendary even before it was exhibited for the first time. It certainly caught our attention, and we wanted to learn more about it.

Kuindzhi was still working on his Moonlight Night on the Dniepr painting when St Petersburg heard about it and started gossipping about its extraordinary beauty and lyrical expression. The interest of the public was so high that Kuindzhi organized two-hour studio visits on Sundays. Among the first visitors were none other than the famous Ivan Turgenev, Ivan Kramskoy and Dmitrii Mendeleev. The Great Duke Konstantin Konstantinovich also visited the studio and purchased the painting for a huge sum of money before it was even finished.

The painting reflects a calm Ukrainian night on the river of Dniepr. The moonlight sheds mysterious green light on the waters of the river and a sleepy village on the shore. Most of the painting is covered with very dark pigments; only a few rays of light distort the dark space. This dramatic contrast and masterful use of color became the key to the painting’s success.

Moonlight Night on the Dniepr was completed in 1880 and exhibited on Bolshaya Morskaya street. What’s interesting is that it was the first one-piece exhibition in Russia. Kuindzhi’s personal exhibition consisted only of the one painting. The artist took every measure to make the painting’s effect on audiences even stronger; he ordered every window to be closed with curtains so that daylight couldn’t enter the exhibition hall. The only source of light was an electric lamp focused on the painting.

This method elicited a tremendous effect on the painting and evoked a great response from viewers. The focused source of light made the painting look like a window to a real landscape; the greenish light of the moon looked surreal, but realistic at the same time. The public was mesmerized. People were spending hours in front of the painting, and the queues to the exhibition hall never seemed to end.

Some skeptics couldn’t believe the light of the moon in the painting could be so bright, even shining, so they tried to find a lamp behind the painting. There was no lamp. Kuindzhi was known to experiment and pursue perfection in his color and light implementation–this can be seen in his other pieces too. His distinctive style and mastered techniques made the painting a unique masterpiece.

The Great Duke Konstantin Konstantinovich loved the painting so much that he took it with him on a cruise. Unfortunately, the salty sea air and humidity caused the painting’s colours to fade, so the version we see today doesn’t display all the beauty and vividness of the piece when it was newly painted. Regardless of its age and history, Moonlight Night on Dniepr continues to captivate audiences and even steals the attention from other paintings on the wall.

Currently, this masterpiece is exhibited at the Russian Museum in St Petersburg.