For A 'Fortress Of Spirit': An Interview With Russian Booker Winner Peter Aleshkovsky

Writer, historian, radio host, and journalist Peter Aleshkovsky was announced winner of the 2016 Russian Booker Prize for Крепость (‘The Fortress’) last Thursday. We spoke via email about his win and his new novel, which follows a middle-class archeologist as he navigates an unforgiving modern Russia. 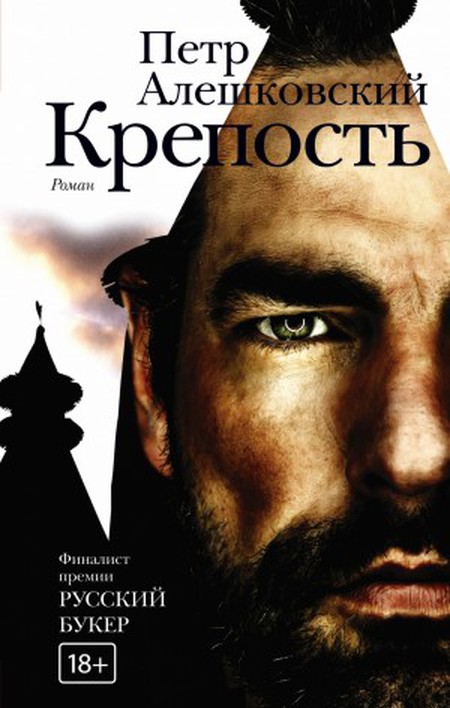 How did the idea for this novel come about?

I used to be an archaeologist, plying my trade at a restoration workshop for old architectural monuments. I specialized in medieval studies, and dug at the Veliky Novgorod, Solovki and Kirillo-Belozersky monasteries [historic sites restored extensively in postwar USSR]. Since then I have closely followed the architects who worked on them, and who have now gone off to work in new architecture. But I don’t blame them for doing so; restoration has gone to pieces, and you have to feed your children somehow.

The great movement those architects followed, getting involved in restoration in the 1960s—or even earlier—was a kind of escapism: they didn’t want to build the inhospitable boxes typical of post-Stalinist construction. They looked for work and found it in restoration, creating a whole school in the process. Today we are losing this school very swiftly; so-called restorative works are often procured by people who are absolutely incompetent in ’scientific’ reconstruction, with builders only aspiring to warm their hands on fat commissions. As a result, monuments suffer. The only way to counter this uncultured approach is through scientific knowledge—always the fortune of a people who take possession of their internal culture. But now this all is rather dull; ‘new’ capitalism is still winning.

Can you explain the book’s title, Крепость (‘The Fortress’)?

The fortress (in the sense of a castle) is present in the novel. The protagonist, an archaeologist, is trying to save it from the predatory hands of false restorers. But there is another kind of fortress—a fortress of spirit that forever manifests itself in an honest and conscientious person. In the Russian language these concepts are transmitted in a single word.

In the novel there are many thoughts running in parallel; there is a parallel history of a Mongol soldier from Mongolia–a kind of ‘Way of the Samurai.’ It is a story about the Battle of Kulikovo, where Russian forces defeated the Mongols, and follows the flight of this hero to Samarkand and Timur [the fourteenth-century Turko-Mongol conqueror], and then his experience during a war, and another war, and another, with his own Mongols. He finally ends his journey in the service of the Russian prince, a liege ready to accept the fugitive. There were always many Mongols in the Russian feudal elite—starting from the fourteenth and fifteenth centuries onwards—and one can find in surnames the trace of those from the steppes who flew and settled down in Rus’ [meaning Ruthenia, the medieval name for a region that roughly encompasses modern Russia]. The novel’s hero, from today, is a descendant of that Mongol soldier.

In Rus’ there always were many foreigners; they were brought there for various reasons, and tried to go unnoticed, but the Gulag evened out all conditions, surnames, and etched out from Russian blood the genetical best (about the worst there is no need to recall—the executioners got the torture chamber, too). Today all of us are still living in a post-Stalin time, so this history is worth remembering; we must appreciate culture and not bury it in the sand in a literal sense. Today, people are casually heading to the feeding trough, unaware and uncaring of everything else, when now, more than ever, they need a fortress.

You’ve been thrice nominated for this prize. Were you surprised by your win?

I wasn’t surprised, but I wasn’t expecting anything in particular. Over time, it’s more important to do what one should, and let be what will be. It’s a good principle formulated by Leo Tolstoy. He, truth be told, was always guided by it. That too is clear.

Who are some other Russian writers you hope to see get this same recognition?

Maria Galina, the author of the fantastic novel СЭС-2 [SES-2]; Andrei Dmitriev [winner of the 2012 Russian Booker], if he is writing a new novel; Narine Abgaryan, who wrote a lengthy and good saga on Armenian life; Sukhbat Aflatuni, who was on this year’s shortlist, and Nikolai Kononov, a subtle stylist who for some reason has yet to be honored by the Booker. 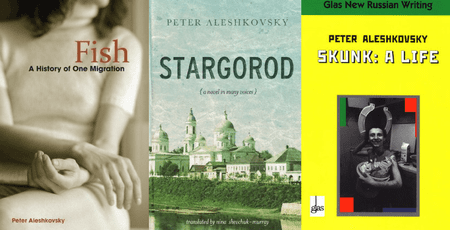 The covers for Fish, Stargorod, and Skunk: A Life | Courtesy of Russian Information Services, and Glas.

And while we wait for Крепость to be translated into English, we recommend catching up with the three works the author already has available in English: Stargorod, Fish, and Skunk!

[Aleshkovsky’s answers were translated from their original Russian with the invaluable help and expertise of Anthony Johnston.]