Firdaws, the National Fashion Brand of the Chechen Republic, Has Global Ambitions 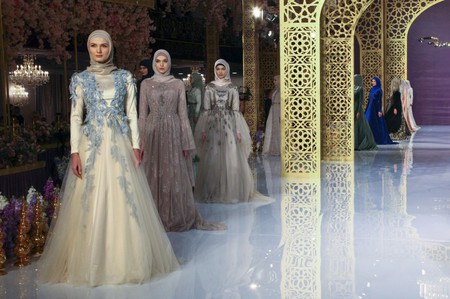 In 2009, the wife of the Chechen leader Ramzan Kadyrov launched Firdaws, a fashion label based on traditional Vainakh national costume and values prescribed by the Quran. Recently, Kadyrov’s 18-year old daughter Aishat Kadyrova has taken over the label, with a view to expanding the brand’s international reach.

In March 2017, Firdaws showed during Moscow Fashion Week for the first time, bringing the same design aesthetic to an international platform. A mission statement on the brand’s website comments that Firdaws ‘combines modern and historical ethnic heritage’ with designs that meet ‘demands not only in Chechnya, but also far beyond its borders.’ At a time of political instability in the region, this move to promote traditional values is certainly interesting.

Modest fashion has garnered increased attention in western markets, with ‘modest’ and contemporary brands offering long sleeved dresses, shirts and scarfs. However Firdaws is distinctly conservative in its design ethos, placing great emphasis on the traditional Islamic values that their clothes are designed to uphold, rather than offering modern interpretations.

During the MFW show, models swathed in reams of ornate material and embellished detail showed only their hands and faces. A Reuters article cited that client orders had already come in from areas such as Dubai, with Ulzana Zadulayeva, Firdaws’ spokesperson, citing intention to expand the business in key markets: ‘Abu Dhabi, Bahrain, we will be thinking about these.’ This interest suggests that beyond the shape and style of the clothes, one of the main draws of the brand is the conservative values that the brand represents.

The founding premise of the brand reflects the radical conservative stance of Chechen leader Ramzan Kadyrov, who is currently under the spotlight for what The Guardian described as a ‘brutal campaign‘ against homosexual men in the region. He was made President of Chechnya by Putin in 2007, and since his ascension has advocated Islam as the region’s main religion, imposing strict rules on how women in the country should dress. A state backed clothing country thus feels more than a little sinister.

Indeed, Firdaws’ website acknowledges the Chechen leader as a key supporter, proudly declaring itself as the first ‘National Fashion Brand’ of the Chechen Republic. The leader’s support of a fashion brand that presents these values to international audiences reflects ongoing domestic demands that women dress modestly. ‘Females are required to cover their heads in public and will not be permitted to study at State University unless they wear dresses,’ noted photographer Diana Markosian, whose project Goodbye, My Chechnya generated much media attention when it came out in 2011. She adds that former Chechen rebels reportedly drive around firing paintballs at women in Chechnya who don’t wear headscarves. As such, the designs can also be seen as an extension of Kadyrov’s strict political doctrine, using fashion as a soft-power alternative to export what he perceives to be core Chechen values to the world.

Alongside the womenswear line Firdaws also offers couture gowns, menswear and a children’s range. Whatever your preference, ‘Firdaws dress and decorate any girl will look delicious in any situation.’ [sic] This strange tension between promising to decorate women while supporting a social model that demands women should be modest and reserved is perplexing, though not as ominous as the insidious way in which the brand is quite literally dressing up propaganda.