Everything You Need to Know about Ussuri Bay 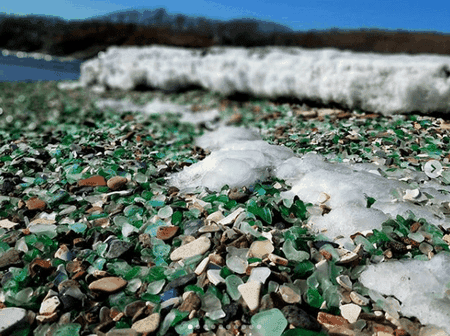 A colourful alcove sparkles under the summer sun just a stone’s throw away from Vladivostok in Russia’s Far East. Even in winter, Ussuri Bay’s brightly flecked shoreline glistens under the frosty light. At first, the colour-spattered beach appears to be one of nature’s anomalies. However, on closer inspection, it’s actually just garbage.

Jutting out on the Muravyov-Amursky peninsula on Russia’s Pacific coastline, Ussuri Bay used to be a dumping ground for a local porcelain factory’s waste and unwanted glass in Soviet times, according to The Siberian Times. As the story goes, truckloads of empty vodka, beer and wine bottles, broken jars and miscellaneous glass fragments were discarded in the bay and left to fester. Nature, however, had a better idea for the waste.

A post shared by TheFirstUltimateเที่ยวสุดโลก (@thefirstultimate) on Apr 3, 2018 at 9:42pm PDT

Years of erosion and the tide’s ebb and flow have polished, smoothed and buffed the pollution into vibrant jewel-like pebbles. Naturally, the beach is made up of black volcanic sand. However, the environment has been gentle on the rubbish and now it appears as if the multi-coloured pebbles have always existed there.

Only a 30-minute drive from Vladivostok and nestled among imposing craggy coastline, Ussuri Bay is a stunning sight all year round. The rainbow of pebbles shines against the sand in summer, while in winter, the snow reflects the kaleidoscope of colours.

Now known locally as Glass Bay, there is an admission fee to enter the beach. But for those who want to see this jewel-studded shoreline, they better be quick because it won’t be around for much longer. Coming full circle, the glass pebbles are vanishing.

Droves of tourists have been making their way to the beach for decades, and some of them have pocketed pieces of the bay as keepsakes. But it’s not just thieving souvenir hunters that are causing the gleaming spectacle to disappear: Mother Nature is still doing her thing.

It is predicted that within two decades erosion will have polished the glass into oblivion. Already there is a visible difference in glass size now to twenty years ago. Academics predict that the 10 centimetres or so of coloured glass won’t survive another 20 more years. This means Ussuri Bay will return back to being a simple but breathtaking sandy beach, just as nature always intended.