Everything You Need to Know About Gatchina Palace 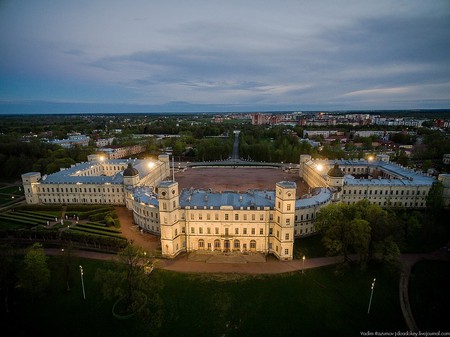 What started off as a small hunting house, the Gatchina residence has become one of the most monumental palaces of St Petersburg, and it is the only palace in the city’s suburbs. Although it may look like a medieval castle, architecturally it is a unique blend of styles culminating in a true masterpiece of Russian architecture. Now, it is a great getaway from the city as its beautiful setting relaxes the tightest of nerves. Here is everything you need to know about Gatchina Palace.

A short history of Gatchina Palace

First, the Gatchina residence belonged to Peter I. The famous architect Antonio Rinaldi was invited to build the palace, which was expected to have two towers and an underground tunnel. The appearance of the palace was inspired by a new architectural style, which was becoming more and more popular: classicism. Rinaldi managed to incorporate the natural surroundings of the park in the palace’s appearance.

Later Peter I gifted it to his sister, and during several decades the residence changed hands until 1765, when it was bought by Ekaterina II, who presented it to her ‘favorite’ person, Duke Orlov. 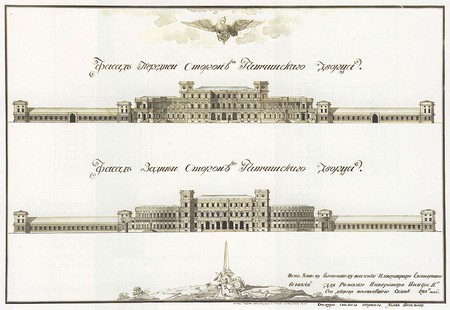 After the death of Duke Orlov, the palace was once again bought by Ekaterina II, and this time it was gifted to her son, Paul I. The young heir was known for his love of martial arts and militarism, so the palace started to slowly change from the hedonistic luxury of Orlov’s taste to a more militaristic castle. The inner and outer transformations were the project of architect V. Brenna.

After Paul I, the palace was inherited from one tsar family to another until the revolution. In 1917 it was expropriated from the tsar family and turned into a museum the following year. During the first years of its existence as a museum, the palace experienced unbelievable popularity, receiving a record-breaking 21,000 tourists in 1921. 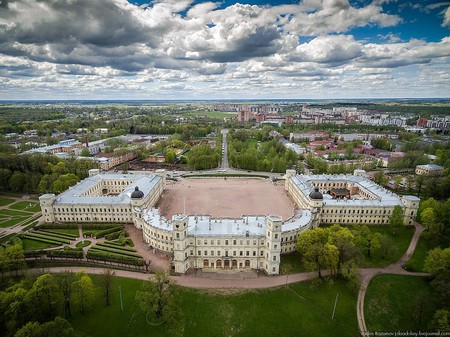 In 1926, most of the furniture and other decorative elements were removed from the palace to be sold. Then the Second World War caused extensive damage to Gatchina Palace; until 1944 it was occupied by the German army, which left explosives behind and burnt it down before leaving the country.

For several post-war decades, Gatchina Palace was used simply as a building to accommodate many uses. In the late 1970s, the palace gained its museum status again, then the restoration began. In 1985 the first fully restored hall was opened to the public.

Even now, there are still many rooms closed to the public. Many drawings and plans of the interior were lost, but the part that is open is an extremely interesting and authentic example of Russia’s classicism architecture.

Once in Gatchina, you can either join an excursion or explore the palace by yourself. In any case, due to detailed explanations of each room, you will need to reserve ample time to learn about the structure. The route through the palace is made in such a way that you won’t miss anything. Be on the lookout for secret doors – it is full of secret corridors and passages, if you are attentive enough, you will notice them in every room of the palace.

You can access the tunnel from the ground floor of the palace, near the entrance and ticket offices. Get one of the jackets or plaids offered at the tunnel entrance – it is cold even in the summer time. Previously, the tunnel lead to Silver Lake, though now the back door is closed. It is still worth visiting to experience what it was like in medieval times and to learn about the palace’s old secrets.

This dining room was only used for very special occasions. The interior’s decor speaks of luxury and leisure. It is decorated with 16 columns carved from Carrara marble; paintings depicting scenes of the life of Dionysus, the god of wine-making; and intricately sculpted works of art protruding from the ceiling. 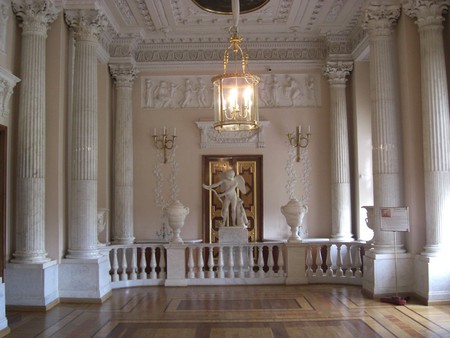 If you ever wondered what it would be like to sleep like a king, don’t miss this room. We can assure you that you’ll be impressed by the luxurious design, enormous bed and the overall colour scheme that combines light blue silk textiles and gold elements.

The throne room of Paul I

The walls of the throne room are decorated with sculptures by G. Neilson. Between the windows, the throne is ornately carved from wood and fully covered with gold and red velvet. Another thing to pay attention to in this room is the parquet: its highly decorative effect was created by layering several types of wood, forming peculiar ornamentation.

Gatchina is relatively close to St Petersburg. It takes only a couple hours to get there by car. You can also get there by the suburban train, which goes every day from the Baltic railway station (check the schedule beforehand). You can also catch a small bus leaving from Moskovskaya metro station, look out for K-18, K-18A and K-100. The best option is K-18 as it stops right in front of the Gatchina Palace.