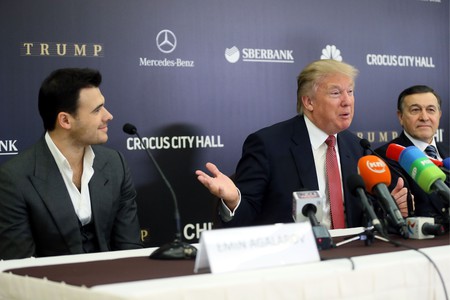 This might be the most bizarre turn in the Donald Trump–Russia storyline since Pee-gate.

The New York Times reported Sunday that Donald Trump Jr. took a meeting with a Kremlin-connected Russian lawyer during the 2016 campaign, who claimed to have damaging information on Hillary Clinton. Taking place at Trump Tower two weeks after Trump clinched the Republican nomination, the meeting was arranged by music publicist Rob Goldstone.

Goldstone, who previously represented artists like Michael Jackson, Cyndi Lauper, and BB King, as well as corporate clients like The Hard Rock Cafe and Richard Branson’s Virgin Megastores, while based in Australia, currently works with the Miss Universe competition and manages Russian pop singer Emin Agalarov. Agalarov’s father, Aras, is a Russian billionaire developer—he is the founder of Crocus Group, one of the nation’s largest real estate companies—who worked with Trump to bring Miss Universe to Russia in 2013 and had planned to build a Trump Tower in Russia prior to Trump’s presidential run.

While Agalarov has been gloating about his continued friendship and exchanges with President Trump and his oldest son—“Now that he ran and was elected, he does not forget his friends”—he also featured Trump in the music video for his terrible song “In Another Life” over three years ago.

Beginning in a boardroom, Agalarov soon starts daydreaming about wandering through a mansion filled with Miss Universe contestants sporting their sashes and white bikinis. Agalarov is then pulled back from his reverie thanks to a yelling Trump, calling him “just another pretty face” and then saying those two magical words: “You’re fired.”

Trump also appears in another of Agalarov’s videos, this time wishing the pop singer a happy 35th birthday. Also in the video: Robert De Niro, although it seems like he just learned about Agalarov’s existence and was forced to shoot the video by the two men on either side of him.