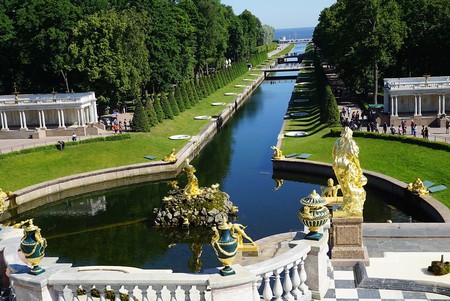 Peterhof is definitely a trip from St Petersburg that is a must even if you’ve just arrived in the city. No other palace in Russia can rival the extravagant fountain park of Peterhof. The views here are beautiful in whichever direction you look, and the palace recounts a sad but important chapter of St Petersburg’s history.

Born from the vision of making a palace and park in Russia that was to rival Versailles in France, Peterhof was born. In early 1700, Peter the Great began the construction of his fountain park for which he even contributed his own drawings and corrections to the blueprints. Soon the work on the Peterhof Grand Palace had also begun, as did that on the secluded mini-palaces in the park where the Emperor could enjoy his privacy and host small groups of guests. For two centuries, Peterhof remained a magnificent residence as well as an extensive fountain park. Unfortunately, during the Second World War, both the palace and park were destroyed. It took years of restoration to return the residence back to its former shape, allowing it to welcome visitors once more. 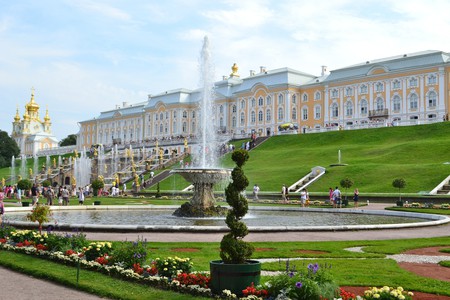 No matter which entrance you use to arrive at the residence, there is an entry fee to the park first. This ticket allows you to wander around the fountain park with certain exclusions. In the park, you will find small palaces, such as the Monplaisir Palace or the Marly Palace that require a separate ticket. The Grottoes under the Grand Cascade also require a separate ticket. There is an option to buy a lower park ticket with a visit to one museum of your choice included, but not the Grand Palace. The Grand Palace is separate and, again, requires an extra ticket. The interiors of the palace have been completely restored since the Second World War, and there is a special exhibition showing what the rooms looked like just after the war. 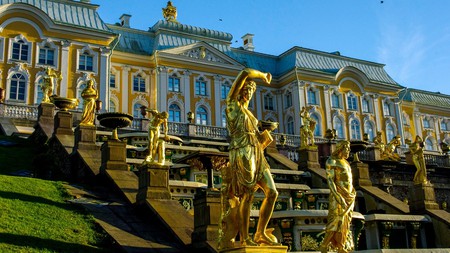 Peterhof is a very popular destination, so there are many transport routes to get there from St Petersburg. The most touristy but also exciting way to get to Peterhof is by hydrofoil from the Palace Embankment in St Petersburg. The journey is very quick, about 15 minutes, and delivers the passengers straight to the bottom of the park. Tickets for the hydrofoil are not cheap compared to other options, around 800 roubles (£9) each way. Public transport also runs to Peterhof. A train leaves about every hour from Baltiyskiy railway station and gets to Old Peterhof station within 30 minutes. It’s another 20 minutes on foot to the park, though. A ticket will cost 55 roubles (£1). Buses and minivans also frequently travel to Peterhof. Here, you’ll have to be fairly conscious of the journey as minivans stop on demand. It is likely that there will be passengers going to Peterhof, but it would be a good idea to double check and ask around. The minivans leave from various subway stations: the 424, 224 and 424a from Avtovo station, the 404, 054 from Baltiyskaya station and the 103 from Leninsky Prospekt station. Prices vary but will generally cost around 55 roubles (£1) for a single journey. 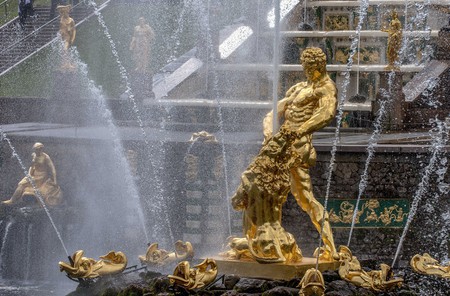 The Samson fountain in Peterhof | © Oberlehner/Pixabay
Give us feedback