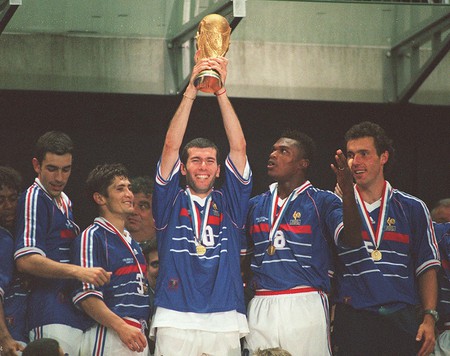 The BBC has launched its Russia 2018 campaign under the banner ‘History Will Be Made’ and while its animated trailer is to be expected, the broadcaster has also created a piece of history that it hopes will stand the test of time far beyond the tournament itself.

The trailer – to be aired before each match the BBC shows live during the tournament – follows a modern-day tapestry that charts iconic moments from World Cups gone by, from Zinedine Zidane’s heroics in the 1998 final to Diego Maradona’s incredible solo effort in 1986. There is also a hefty nod to English memories, of glory and pain, with Bobby Moore holding the trophy aloft in 1966, Gazza’s semi-final tears at Italia 90 and Frank Lampard’s agonising expression at the goal that never was in South Africa 2010.

Unbelievably, every single scene featured in the trailer was meticulously embroidered individually and will be turned into a seven-metre-long tapestry scheduled for public display at a later date. To make the film, the process involved more than 227,000 metres of thread, which eventually led to 600 individual frames in total. The physical tapestry set for display will be constructed to feature each moment, but if each actual frame that was created originally was laid out in a row the entire piece would measure over 1,2000 metres in total.

Edward Usher, part of the BBC Creative team, explains: ‘We decided that we wanted to make a real tapestry because we thought it would be amazing to have something that would last. You can do almost anything with CGI and it loses the joy of it because people can say “That’s just CGI” and switch off, but we hope that what comes through is that we did it for real. We animated a film and then programmed embroidery machines to create every single frame as a unique embroidery, which we then photographed and that’s what you see playing out.’

The campaign, headed up by BBC Creative and BBC Sport Marketing, was animated by London-based Blinkink, who have forged a reputation for combining modern technology with classic techniques. Tim Jones, creative director at BBC Creative, says: ‘Choosing which iconic moments to feature was a detailed process, where do you start and finish with the most iconic tournament in the world? To have made this film and a real life tapestry, is testament to the creativity, talent and ambition of the team in Salford and everyone involved in this project.’

The film is played alongside a traditional Russian folk song called ‘Ochi Cheryne’ in reference to the tournament’s hosts. Arranged by Alex Baranowski, it was recorded by the London Metropolitan Orchestra at the famous Abbey Road Studios and features Sir John Tomlinson’s vocals. The Lancashire-born bass-baritone has been singing professionally for 50 years and put his take on the lyrics that were written by the Ukrainian poet and writer Yevhen Hrebinka in the late 19th century – another example of the modern and historic being brought together.