An Architectural Guide to the World Cup Stadiums 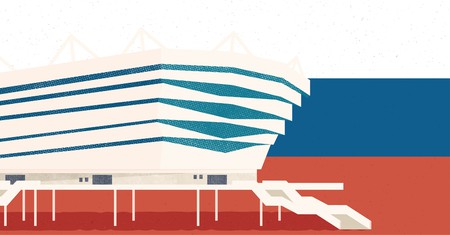 Russia has spent billions preparing for the 2018 FIFA World Cup, running from 14 June–15 July, building seven of its 12 stadiums entirely from scratch for the event. Despite a few tech glitches, overspending and the discovery of some World War II bombs, the venues are now complete. Here’s our guide to these incredible arenas.

This spectacular stadium is one of the most cutting edge in the world, and no wonder – it’s also thought to be the most expensive football stadium ever built, reportedly costing around $1.5 billion. The spaceship-inspired design created by leading Japanese architect Kisho Kurokawa boasts a sliding pitch and retractable roof. It’s worth visiting alone for its vertigo-inducing stands and incredible views towards the Gulf of Finland from behind the seats. However, Kurokawa’s achievement has been tainted somewhat by controversy, delays and soaring costs. It has taken a decade to build, with various issues surrounding a persistently leaky roof, a vibrating pitch, but much worse is allegedly 110 North Koreans had been working there in atrocious conditions after an in-depth investigation by Norwegian football magazine Josimar.

The architects faced a tricky challenge for the redesign of this stadium in Ekaterinburg, as the firm had to come up with an innovative solution to ensure it reached FIFA’s required minimum 35,000 capacity without altering the original 1950s Stalinist facade. ABD Architects resolved the issue by retrofitting temporary stands that actually sit outside the stadium behind each goal, as well as adding concave roof made using high-tech polycarbonate rings weighing 6,000 tonnes. The stunning features of the original Central Stadium have also been restored, including neoclassical pillars topped with of a milling machine operator, a steelmaker, a hunter, a footballer player, a female skier and a female athlete with a torch.

For fans without tickets: Kazan Arena

Named the ‘sports capital of Russia’ in 2009, Kazan boasts one of the most impressive of all the arenas, designed by sports architecture firm Populous, which also created the Fisht Stadium and Rostov Arena for the tournament. Despite the fact that it’ll be one of the oldest stadiums at the ripe old age of five years, it has some of the best tech, including the world’s largest outdoor high-definition screen at 4,030 square metres. If you’re flying into Kazan International Airport, you may want to be on the lookout for this riverside arena’s unique water lily-themed roof.

This boldly patterned red-and-white stadium is inspired by the colours of its regular tenants, Spartak Moscow. Initially, the design for the stadium was rejected in 2010 by an architectural council as the project was deemed ‘too ordinary’ – the jazzier ‘armour’-inspired cladding featuring 600 giant glass shingles was then developed by facade specialist Dexter Moren Associates. The stadium is set to be a fan favourite during the World Cup, especially for admirers of the ‘People’s Team’, Spartak Moscow. A statue of the club’s mascot – the famous Roman gladiator Spartacus – stands outside the grounds, which has proved a popular photo op among supporters since its completion in 2014.

Much like the Central Stadium, this 1950s classic Soviet building is steeped in history and is considered to be Russia’s jewel in the crown for this year’s World Cup. It has hosted more than 3,000 matches and some of the world’s most important sporting events, including the 1980 Olympics and the 2013 World Athletics Championships, as well as the 1999 UEFA Cup final and 2008 Champions League final. During the Communist era, it was the most important football ground in the USSR and still remains the national stadium of the Russian national team – a huge statue of Lenin casts a watchful eye over the front entrance. As one of the largest stadiums in Europe, it enjoys impressive views over the city, including the beautiful Moscow State University skyscraper, which was designed by leading Stalinist architect Lev Rudnev.

This was a problematic project from the start, mainly due to the fact it’s built on the marshy wetlands of Oktyabrsky Island. In addition to this, the company responsible for its original design, Mostovik, went bankrupt. The initial plan for the then-called Arena Baltika, which is sandwiched between Poland and Lithuania, was that it would seat 45,000 and have a retractable roof, but it’s now been scaled back to a more modest 35,000-seat roofless venue. The oblong-shaped building was constructed using largely prefabricated elements and, as a result, is one the cheapest. If you happen to be visiting during the World Cup, it’s worth the 20-minute walk to see the impressive Gothic-style Königsberg Cathedral, one of Kaliningrad’s major landmarks.

Populous was behind this Fabergé egg-style stadium, which was also inspired by the snow-capped peaks of Mount Fisht. It was commissioned especially for the 2014 Winter Olympics in Sochi and was originally designed so that spectators could enjoy stunning views of both the Black Sea and the Krasnaya Polyana mountains simultaneously. However, these two viewing points have been filled with temporary seating for the World Cup.

The pretty one: Nizhny Novgorod Stadium

This brand-new stadium is one of the most attractive of the 12. Spirals of blue and white whip around the semi-transparent facade and roof panels, inspired by the wind and water elements of the nearby Volga countryside. The cutting-edge design by construction giant Stroytransgaz offers incredible views over the 500-year-old Nizhny Novgorod Kremlin, where fans can catch a glimpse of the famous Alexander Nevsky Cathedral and Oka and Volga rivers.

Saransk is one of the smallest cities to host a match. It’s new Mordovia Arena might not have the bells and whistles of some of the other stadia, but the bright orange exterior, apparently inspired by the rich palette of the Mordovia region‘s arts and crafts scene, is pretty photogenic. The project has been a bit of a slow burner, breaking ground in 2010 and only just completed in the nick of time by SaranskGrazhdanProekt. The stadium’s turf is being imported from Canada and there will be 37km of undersoil heating as well as overground heaters.

It’s been a tight squeeze to get this stadium finished on time: it got the go ahead to start hosting football matches just one day before its first test match and there’s still work to be done. One of the largest of the 12 World Cup venues at 156,000 square meters, Samara Arena’s impressive 65-metre spaceship-style glass dome was heavily influenced by the Soviet space programme, which was located in the city, and should look pretty spectacular once it’s lit up at night. It’s just as well the original FIFA bid didn’t go through as the previous plan was to build the stadium on an island south of the city where almost no infrastructure or settlements existed whatsoever, not even a bridge.

The one to watch: Rostov Arena

Another Populous building, this riverside stadium was originally intended to be a totally unique design with a roof inspired by the meandering River Don. However, spiralling costs put paid to Populous’ more ambitious plans. This is just the start of development for the city’s left bank, with the intention being to create a vibrant community hub. A new sports centre, rowing canal, water sports area, ice-skating rink, handball court, equestrian centre, as well as many new shops, restaurants and businesses are planning to be built after the event. Interestingly, five almost perfectly preserved World War II shells were discovered during the groundbreaking for the stadium back in June 2013.

This stadium by GMP Architekten replaces a classic Soviet bowl design that was built in the 1950s on the site of a former oil depot. De-miners found more than 300 World War II munitions during the demolition of the old arena, as well as the remains of Red Army soldiers. The brand-new arena has an intricate external shell mimicking basketwork that’s intended to blend seamlessly into the landscape while also letting in plenty of light. Close by is the picturesque Friendship Park and Volgograd’s main attraction, the imposing ‘The Motherland Calls’ statue, which stands as one of the tallest in the world at 85 metres high.

Looking for more information on the 2018 FIFA World Cup? Check out the 11 best football kits released for the tournament here or see which other sports stadiums are being built around the world this year here.