A Literary Tour of St. Petersburg

The residents of St Petersburg see their city on the Neva river as a huge stone book, whose pages were created by great Russian poets and writers. The period of the Great Russian Empire is reflected in the city’s streets, buildings and literature. The streets of St Petersburg recall the lines pronounced by the characters of many works by leading writers and poets of 17th to 20th centuries. The city has many monuments dedicated to writers and literary characters, and buildings marked with plaques dedicated to writers and poets. The Culture Trip takes you on a tour of St Petersburg’s literary past and present, including a collection of the best museums, workplaces and memorials to Russian writers.

Museum
Facebook
Email
Twitter
Pinterest
Copy link
Share
Map View
The memorial Apartment-Museum of Aleksander Pushkin is dedicated to the last period of the creative life of the writer. The museum is housed on the lower floor of the old mansion where, in September 1836, Pushkin and his family settled. He died in this flat on 25 January 1837, after he was tragically wounded in a duel with Dantes. During the 1920s the apartment was assigned the status of a museum, and Pushkin’s death has been celebrated here every year. The apartment was painstakingly recreated on the basis of the plan made by Zhukovsky and historical data. The museum belongs to the complex of the National Pushkin Museum, which since 1997 has been proclaimed an especially valuable object of the cultural heritage of Russia. At present, the museum possesses a unique collection of iconographical, memorial and historical materials from Pushkin’s era. 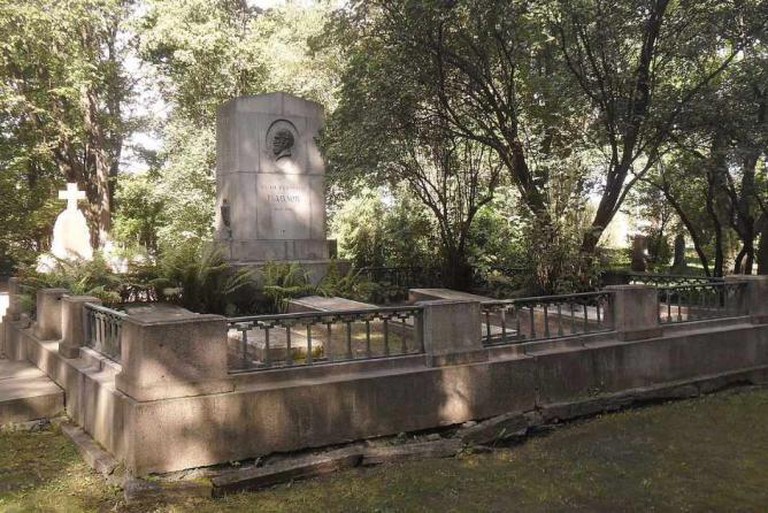 Pavlov's grave on Literatorskie Mostki in St Petersburg | © SerSem/WikiCommons
Literatorskie Mostki is a special section of the Volkovskoe Cemetery in St Petersburg, also known as the museum-necropolis, where many Russian and Soviet writers, musicians, actors, architects, scientists and public figures were buried. There are about 500 tombstones in the territory of the necropolis, including those with significant artistic value. It is the final resting place for the writers Turgenev, Saltykov-Shchedrin, Leskov, Kuprin and Tiutchev, the revolutionaries Plekhanov and Zasulich, the scientists Mendeleyev, Pavlov, and Popov, and many others. Here also lies the mother of Lenin and his sisters. In 1935, the cemetery returned as part of the department of the State Museum for having culturally and historically important urban sculptures.
Open In Google Maps
3 Rasstannyy Proyezd, Frunzenskiy rayon Sankt-Peterburg, 192007, Russia
+78127660400
Visit Website
Give us feedback

Building, Memorial
Facebook
Email
Twitter
Pinterest
Copy link
Share
Map View
The so-called Dostoevsky Zone is an informal collection of areas close to Sennaya Square in St Petersburg, that are associated with the work of Fyodor Dostoevsky. He lived on Kaznacheyskaya Ulitsa 7, where a a memorial plaque has now been installed; on the Catherine Canal unfolds the action of The Idiot and Crime and Punishment, two of his most famous works. According to local historical research, Rodion Raskolnikov, the protagonist of Crime and Punishment, lived on Grazhanskaya Ulitsa 19/5. Indeed, the building is listed in many guide books about St Petersburg as the Raskolnikov House, and noted with a literary hero memorial sign.
Open In Google Maps
St. Petersburg, Russia
Give us feedback

The literary and artistic café Stray Dog was a central venue of St Petersburg’s cultural life of the Silver Age. The artistic café, or art basement, Stray Dog operated from December 31 1911 to March 3 1915 in house number 5 on Michael’s Square Street. The title of the café is a satire of the image of the artist as a beaten homeless dog. The café organized theatrical performances, lectures, poetry and music nights. The art cellar’s glory was brought by its famous visitors, such as Anna Akhmatova, Osip Mandelstam, Igor Severyanin, Vladimir Mayakovsky, Konstantin Balmont, Alexei Tolstoy and others. The original café closed due to financial problems, but in was reopened in 2001 on a wave of interest in the pre-revolutionary history of Russia and Silver Age of Russian Poetry.

Museum
Facebook
Email
Twitter
Pinterest
Copy link
Share
Map View
Aleksander Blok’s apartment, number 21, which later became a museum, is located on Dekabristov Street, and is where the poet spent the last nine years of his life. It was the first museum in Russia dedicated to the poet of the Silver Age of Russian Poetry (c1890-c1930). Since Aleksander Blok perfectly represents that time, his name became symbolic for both his contemporaries and people of later generations. The display includes items that have connections with various literary circles, such as autographs, letters and books, and is dedicated to life and work of Aleksander Blok, one of the greatest Russian lyrical poets

Visit the house of protagonist of The Queen of Spades 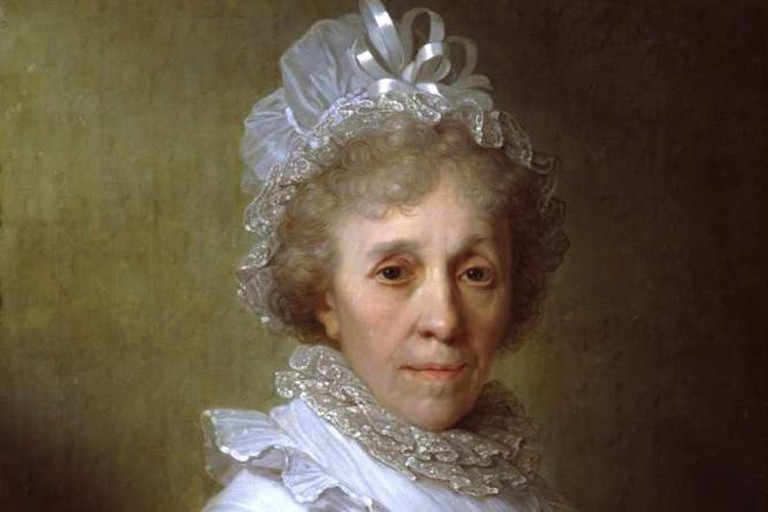 Portrait of Nathalie Petrovna Golitsyn (1741-1837) by Vladimir Borovikovsky | Image courtesy of Russian State Museum
Princess Natalya Golitsyna, according to literature historians, served as a prototype of the Countess in Pushkin’s short story The Queen of Spades, written about human imperfections and greed for wealth. Princess Golitsyna was one of the most influential figures of the two Russian capitals, St Petersburg and Moscow, gaining a good reputation and all the attention of the Emperor and the Empress. Natalya was the maid of honor and moved within the Emperor circles of Catherine II and Nicholas I. She lived here until very old age, until her death in 1837. The house was built in the second half of the 18th century and combines the features of baroque style and early classicism. The parts of the house described in the story include the spacious lobby and the grand marble staircase that leads to the fireplace. Above it is a high semi-circular mirror, inside which is a small clock with barely visible Roman numerals on the dial. In his novel, Pushkin exactly describes the interior of the house.
Open In Google Maps
10 Malaya Morskaya Ulitsa, Tsentralnyy rayon Sankt-Peterburg, 191186, Russia
Give us feedback

Building
Facebook
Email
Twitter
Pinterest
Copy link
Share
Map View
The literary and political magazine Sovremennikwas founded by Alexander Pushkin, and released between the years 1836-1866. Initially the works of Nikolai Gogol, Nikolay Zhukovsky and Fyodor Dostoevsky were published in this magazine. The magazine was not successful among readers, because of the innovative concept of a serious periodical journal devoted to quotidian issues, and was only printed in 600 exemplars, which became ruinous for Sovremennik since it could not cover printing costs or employee’s fees. After the death of Pushkin, the journal was headed by Nekrasov. Nekrasov lived in an apartment in building 2 on Nekrasova Street from 1857 until his death in 1877, which he converted into the office of Sovremennik. During those years his apartment became a true center of cultural and literary life of St Petersburg, with the cream of Russian literature frequently visiting his flat.
Open In Google Maps
St. Petersburg, Russia
Give us feedback

Mayor Kovalev’s Nose is probably the most unusual monument in St Petersourg. The sculpture is based on the character of the story Nose by Nikolay Gogol, and was immortalized in October 1995 on the façade of a house in Voznesensky Prospect. According to the story, the nose of Mayor Kovalev had a habit of leaving its owner and strolling around the city by itself. The monument is made from a gray limestone measuring 60 by 35 cm, at the bottom of which is an image of a nose made from pink Ukrainian marble imported directly from the home country of Gogol. 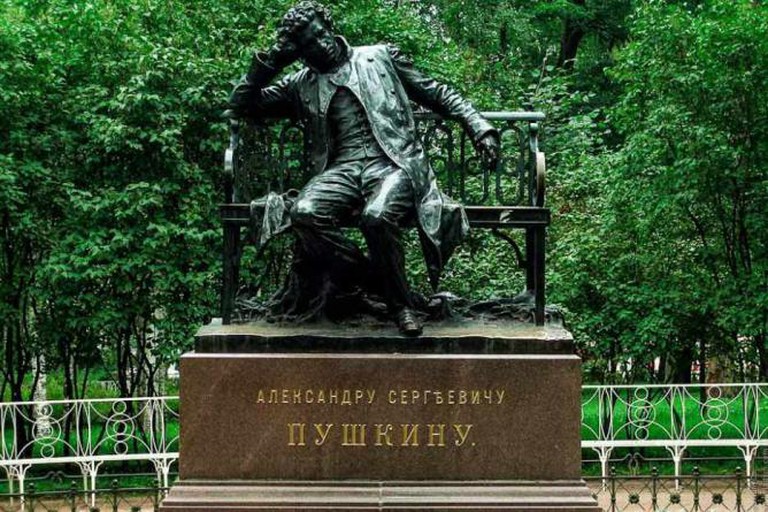 Sculpture of the poet by Vlad Meytin/Flickr
Before the 150th anniversary of the birth of Aleksander Pushkin, a memorial Lyceum-museum was opened in Tsarskoe Selo, a former educational establishment for noble boys, which was considered one of the best in Russia. Pushkin studied here between 1811 and 1817, during his adolescence. It was within the lyceum’s walls that his poetical talent was revealed. The lyceum helped the poet to find loyal and faithful friends who remained true to his poetical spirit and ideas until his death. Many of Pushkin’s classmates also became well-known in Russia and internationally, including the diplomat Alexander Gorchakov, the poet Anton Delvig, the admiral and historian of the Russian navy Fyodor Matiushkin. Some of the original school interior has been recreated, such as the Grand Hall, the Newspaper Room, and the Library, with an authentic collection of books, classrooms and even dormitories.