A Guide to Moscow Theatre Life 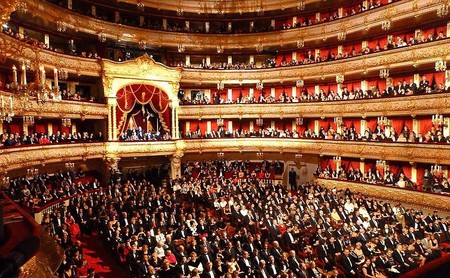 Russia’s capital is home to around 170 various theatres, most of which feature exceptional repertoire and sell-out performances. If a night at the theatre is on your Moscow must-do list, here are the places you simply can’t miss when on your trip to Russia.

One of Moscow’s most iconic and spectacular attractions, the Bolshoi Theatre hosts equally magnificent Russian opera and ballet performances. Part of the former Imperial Theatre, Bolshoi is a living pageant of Russia’s history. To get the most from your visit, be sure to choose a show on the Historic Stage.

Opened 1824, Maly Theatre cherishes traditions of classic Russian theatre. In the 19th century the theatre was particularly favored by Russia’s most celebrated playwrights: Alexander Ostrovsky, a trailblazer of Russian realism put on 40 of his 52 plays here. If you love reading Pushkin and Chekhov, you’ll definitely enjoy watching a performance at the Maly Theatre.

Moscow Art Theatre aka MKhAT is an absolute must-visit for any theatre-lover. Founded in 1898 by the legendary K.S.Stanislavsky and V.I.Nemirovich-Danchenko, MKhAT created a revolution that completely changed the concept of Russian theatre. Today Moscow Art Theatre successfully combines classic and modern repertoire, blending Russian drama traditions with rigorous experiments.

Founded by a group of young and strong-minded actors during the so-called ‘Khrushchev Thaw’, Sovremennik represented a new wave in Soviet theatre. To this day Sovremennik is of the most popular theatres in Moscow, featuring extensive repertoire, exciting premiers and exceptionally talented actors.

A post shared by Московский Театр Современник (@sovremenniktheatre) on Nov 30, 2017 at 10:26am PST

Housed in a spectacular pseudo-Russian building, Theatre of Nations is one of the most popular modern theatres in Russia. Having no regular troupe, the theatre boasts a wide-ranging repertoire, from ballet and drama to post-drama and comedy. Showcasing the finest European theatre productions, Theatre of Nations also puts on plays by Russian authors and organizes theatre festivals.

One of the most talke-about theatre venues in Russia, the revamped Gogol Centre is a paradise for lovers of modern drama. However there’s much more to it than controversial performances, Gogol Centre is also home to the discussion club ‘Gogol+’ and the ‘Gogol cinema’ program. Large-scale music events, modern theatre performances, and rare film screenings are just some of the delights within its sleek contemporary interiors.

Founded in 2005, this small theatre company is one of a few in Moscow to address polarizing political and social issues. Praised by opinion-leaders from Russia and Europe, Praktika Theatre engages visionary playwrights and finds exciting ways to produce new drama.