A Guide to Jewish Culture in St Petersburg 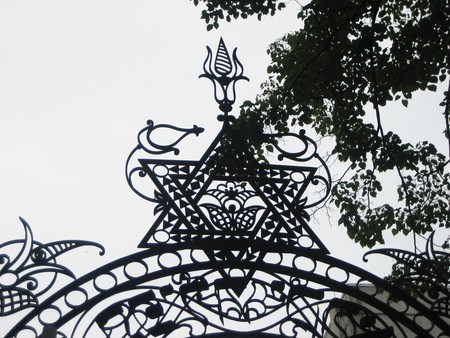 Outside the St Petersburg Synagogue | © karenhorton/Flickr

The Grand Choral Synagogue is the second largest synagogue in Eastern Europe and the only synagogue in St Petersburg. It was commissioned in the late nineteenth century with the permission of the tsar Alexander II. The synagogue remains an active place of worship today, but also welcomes visitors on guided tours that can be organised upon request. Information about upcoming services is available on its website.

Le’chaim restaurant is located on the ground floor of the Grand Choral Synagogue. It is the only restaurant in the city that produces kosher food, adhering to all Jewish religious laws. The establishment is popularly used for celebrations, such as bar mitzvah ceremonies and Sabbath meals. Interestingly, the restaurant does not make a profit – all earnings are donated to support the synagogue, Hebrew schools and to help those in need.

A post shared by Kosher restaurant StPetersburg (@lehaim_restaurant) on Apr 7, 2017 at 7:32am PDT

During the Second World War, St Petersburg, or the then-called Leningrad, was under Siege. The Nazis got very close to the city. When they entered Tsarskoye Selo, 20 km (12.4 miles) outside the city, in 1941, all Jews were forced to register. Then all men, women and children were executed. They were buried in a mass-grave, some still alive and only wounded from the shots. Witnesses of the event said that the ground was still moving for a day after that.

To commemorate the suffering of these people, a monument was built in 1972 solely from donations from the city’s Jewish community. The name of the monument is “The Formula of Grief”. It resembles the shape of the first letter of the Hebrew alphabet, aleph, symbolising a new beginning. An annual remembrance gathering is held on the first Sunday of October.

The Preobrazhenskoe Jewish Cemetery was founded in 1875 after a request from the local Jewish community. They were first granted a section of the larger cemetery for members of other faiths, but over time the Jewish cemetery gained its independence. By the end of the nineteenth century, a prayer house was built, and just before the revolution, a stone building was erected for ablution and funerary services. In the second half of the twentieth century, under the Soviet Union, the cemetery was shut down and became a target for vandals. It has now been reopened, but burial is allowed only for the relatives of cemetery members as the restoration works continue.