A Brief History of the 'Ninth Wave' 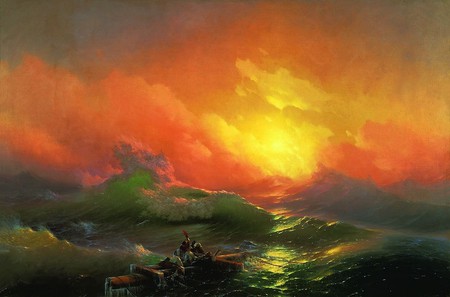 A Russian painter Ivan Aivazovsky (1817 – 1900) was praised as a true master of marinist painting, and his masterpiece ‘Ninth Wave’ is a true gem of Russian romantic painting and of the whole marinist genre.

During his artistic life, Aivazovsky created around 6,000 marinist paintings, but ‘Ninth Wave’ (1850) became that one masterpiece which crowned him as one of the best marinist painters the history has known.

Born in port town of Feodisia in Crimea, after studing in the Fine Art Academy in Saint-Petersburg, Aivazovsky was eternally in love with the sea. His inspiration was coming from his childhood memories from the years spent on the seaside of the Black Sea, the cold and stormy Baltic sea during his student years and some expeditions taken with the Russian fleet.

The painter was mesmerized by the power of sea, reportedly not feeling fear even in the most risky situations. Once a ship was in a terrible storm, some said everyone on that ship was dead. By great luck, the ship reached a port, although the memories of this storm stayed with Aivazovsky and became a foundation to many of his paintings.

The majority of Aivazovsky masterpieces very often depict strong storms and shipwrecks. He shows us the irresistible strength of nature while humans are lost among the waves and don’t seem to have much opportunity to fight back.

The ‘Ninth Wave’ is somehow different. Some legends say, in every storm the ‘ninth wave’ is the strongest and the most dangerous one. In Aivazovsky’s painting we see exactly that: a huge, ‘ninth’ wave approaching several people who survived a shipwreck. Humans are holding to a piece of a mast. Although, in contrast to a dramatic name, the whole atmosphere and colour palette of the painting is optimistic: we see a sunrise upon the sea, the night storm is over and the survivors have a hope.

This notional contrast, combined with masterly painted sea, waves, even little drops of water shining in the sun – all this has helped Aivazovsky and his painting gain fame. Nowadays, the legendary ‘Ninth Wave’ is exhibited in a Russian museum in St Petersburg as a part of the permanent collection.