Russia’s cultural capital, St. Petersburg is home to the world-famous Imperial Porcelain Factory. As the country’s oldest porcelain manufacturer, its pieces can be found in the State Hermitage Museum, while its net-patterned tea sets have become synonymous with Russian porcelain. Read on to discover the history behind the heritage, including the origins of the famous ‘cobalt net’ pattern and what role Kazimir Malevich had to play. 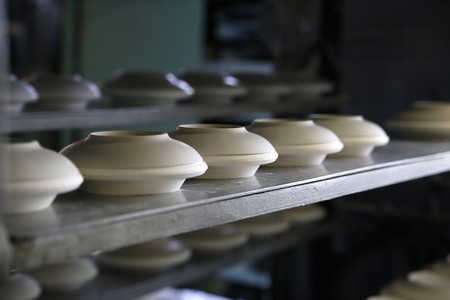 Russian china owes its unique quality and composition to Dmitry Vinogradov, a talented chemist and associate of Mikhail Lomonosov himself, who deduced the recipe of ‘white gold’ and produced it using local materials. At first the plant manufactured smaller objects like tobacco boxes, but by 1756 Vinogradov managed to build a bigger horn and the factory started producing dinnerware. The porcelain design reached unprecedented levels of sophistication in the reign of Catherine the Great – ‘Catherine porcelain’ was considered of the same artistic value as creations of prominent artists and sculptors. 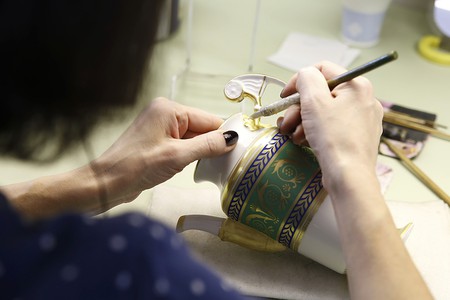 Artist at work | Courtesy of the Imperial Porcelain Factory

During the rule of Alexander I the factory underwent an extensive reorganization under the supervision of esteemed Russian and foreign technicians and artists. After the Patriotic War of 1812, artists focused on national themes in porcelain decoration, creating a series of ‘battle plates’ depicting soldiers of various ranks and portraits of military commanders. By the beginning of the 20th century, the factory’s technological expertise reached its peak, while creatively it was influences by the revolutionary artistic movement Mir Iskusstva (World of Art). 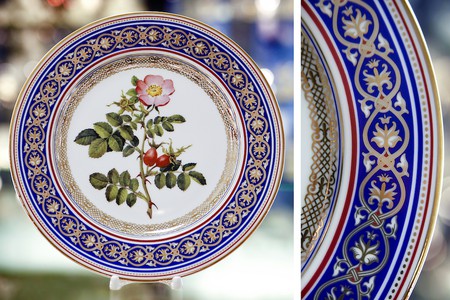 Beautifully decorated plate I Courtesy of the Imperial Porcelain Factory

With its name changed to Lomonosov Porcelain Factory after the 1917 Revolution, the factory was nationalized and from then on had to adjust its artistic expertise to the needs of ideological propaganda. This whimsical collaboration resulted into some of the most interesting pieces of porcelain art in the 20th century: Russian porcelain of the 1920s was thriving on talent of such artists as Boris Kustodiev, Kuzma Petrov-Vodkin,Mstislav Dobuzhinsky, Kazimir Malevich and Wassily Kandinsky. 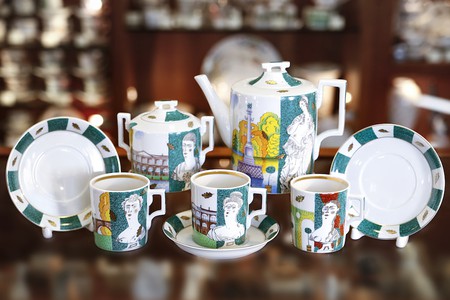 This iconic pattern that became the factory’s symbol, despite being relatively new, was created in 1944 soon after the Siege of Leningrad ended. Young artist Anna Yatskevich, who was ornamenting a tulip-shaped tea set by sculptor Seraphima Yakovleva, created a net-like pattern that reminded her of paper bomb blast protection on windows and criss-crossed searchlight beams – all from the Siege days. 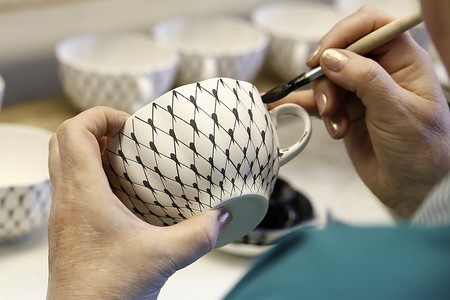 At the Brussels World Fair in 1958 a ‘cobalt net’ tea-set was awarded the exposition’s star of gold. Unfortunately the artist who created the pattern didn’t live to see the day – like many other Siege survivors she died soon after World War II was over, not knowing that her work had become a symbol of Russian porcelain.

In the 1960s the factory’s porcelain pieces lost their opulent decorations of the Stalin era: inspired by the atmosphere of Khrushchev Thaw, artists embraced white porcelain, laconic design and simple geometric forms. 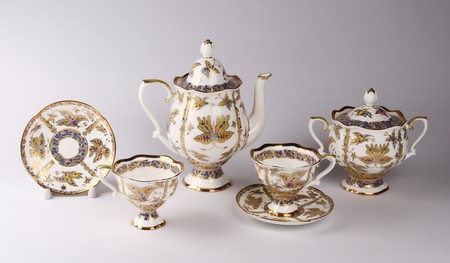 Despite the changing times, the factory has always employed only the most talented artists and used breakthrough technologies. To this day, the Imperial Porcelain is known to have a trend-aware approach to porcelain production, while at the same time leveraging its almost 300-year-old legacy. 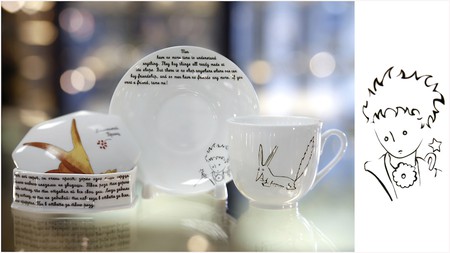