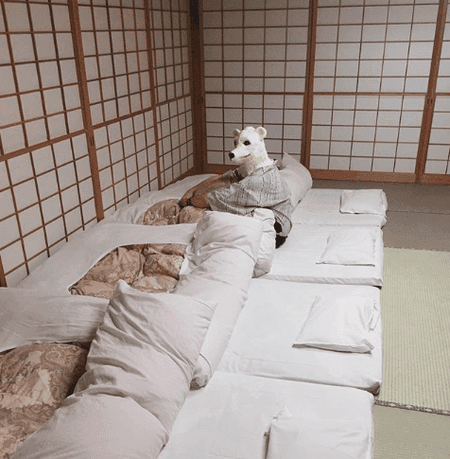 Russians may not have a reputation for being jokers, but they really can be a funny bunch. And the nation certainly does have a knack for sly, droll wit. So if you appreciate a dry sense of humour or all-things-absurd, or see amusement in self-depreciation and existential moroseness, these Instagram accounts are sure to make you laugh out loud. Or, at least put a smile on your face.

A true story, @svetlanko69 documents the daily life of a family and their pet bear, with glamour-shot style snaps of the animal. Rescued from a poorly equipped circus, Stephan, the bear, was adopted into the family in 1993 as a five year old that was suffering from neglect. Unable to endure the circus’s regime, he now spends most of his time hanging out with his new best friends and family, Svetlana and Yury, in a cottage on the outskirts of Moscow. The hulking 2.25 metre bear has never had an altercation with his adoptive family, eats about 25 kilograms of fruit and vegetables a day and earns his keep as an actor and model, as well as being an Instagram star.

What appears to be a flippant feed from the founder of one of Moscow’s leading design agencies, Artemy Lebedev, aka @temalebedev, is a foodie account with an ironic twist. Instead of cluttering up our feeds with same old coffee art and well-presented poached eggs, Lebedev gives mundane food bloggers the proverbial middle finger and posts snaps of his meals after he eats them. Being one of Russia’s leading designers, it’s really no surprise that Lebedev makes even scraps of food and dirty dishes look good.

Cats of Instagram aren’t the only animals on social media that can put a smile on a face. The critters and and creatures that keepers at the Moscow Zoo pap for @moscow_zoo_official, intrigue, delight and amuse. Entertain yourself with the primates pulling faces, the weird world of invertebrates, odd looking birds and ridiculous animals you’ve probably never seen before, all while basking in their ridiculous cuteness too.

Let’s just agree: inspirational posts can be the worst. Yet, @putinspiration matches up motivational quotes with Russia’s main man himself, President Putin, to hilarious effect. The cleverly matched text and images are on point with their wit and make the most of the Russian president’s virile posing. Despite only posting 36 images of positive affirmations, the account has already amassed nearly 25 thousand followers, proving lots of people like a pep talk from Putin.

Probably the most morose elephant on Instagram, @trunkdrunk nails Russian dry humour. The account takes us to some of Russia’s grayest, bleakest landscapes, and puts a man wearing an elephant’s head in the middle of it. Claiming he’s not ‘asking for happiness, just to feel a little less pain’, the accompanying blurbs are either nonsense or knowingly sullen.

Another example of that Russian droll wit, @mishka.travel sees Elnar Mansurov travel across the globe, snapping himself wearing a polar bear mask. He blogs about budget travel, and the account documents his adventures. He reportedly left one head in a pool in Iceland, and now travels with his backup. Visiting every continent including Antarctica, his feed is filled with stunning backdrops and the lone, adventurous polar bear.

As an artist and as Efremova calls herself, a ‘water colour photographer’, @where.summer.is is full of beautiful, whimsical illustrations. Scroll through it however, she has a habit of drawing delightful cats coming out of coffee cup splashes. With great skill and a sharp eye, Efremova seamlessly matches up her feline’s colourings to whatever latter, espresso or flat white she’s drinking.

If you ever thought being a suit was a boring life, @macpava will prove you wrong. Aside from being an office worker, Pavel is an adrenaline junkee and avid lover of extreme sports. He loves to skydive, surf and snowboard in his suit. So strong is his love for both office attire and adventure, he dons his uniform regardless of climate and country as he travels around the globe in search of thrills.

While @maratca is just an ordinary dad who works as a camera man, and as such his Instagram is fairly standard, Ca posted one hilarious photo essay that went viral. Left alone for a period of time with a young daughter to look after, he turned the bad dad archetype on its head, while clearly enjoying some father-daughter bonding time. These evidently constructed photos of him being a drunken, hopeless father are always accompanied by a handwritten note stating ‘Mum, we’re doing fine’. If only all dad jokes were this funny.