8 Things You Didn't Know About 'Crime And Punishment' 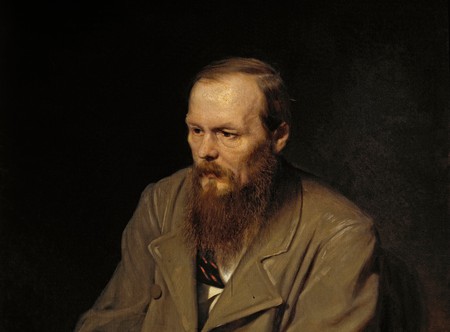 This month marks the 150th anniversary of the publication of Fyodor Dostoevsky’s Crime and Punishment, a novel originally published in twelve monthly installments during the year 1866. In other words, it’s the perfect opportunity to brush up on your knowledge of the Russian classic. Here’s a little starter.

The novel is set in a very real St. Petersburg

It’s probably the most obvious fact about Crime and Punishment, but if you’re reading the original text, or a faithful translation of it, you’ll find that Dostoevsky blanked the names of most of the places he mentions (for example, “V—y Prospect” stands for Voznesensky Prospect). Thankfully, the map above—adapted from the original Russian of the good people at Yandex—should rectify the experience for you.

The exact stone under which Raskolnikov hid the loot is real, too

Now that’s precision: Dostoevsky’s wife, Anna Grigorievna, recalled in her memoir that not too long after their marriage, the writer took her to a yard during a walk and showed her the stone under which his most famous murderer had put the stolen objects. We believe the stone’s since disappeared, but feel free to go look for it yourself.

Raskolnikov is far from a random, raspy, sinister name. It comes from the Russian for ‘schism’, raskol, and its derivative raskolniki, which refers to a particular group of schismatics: namely, the Old Believers, who broke from the Russian Orthodox Church in the mid-seventeenth century. Razumikhin, meanwhile, comes from razum—reason, mind, intelligence—and Lebezyatnikov was made out of the verb lebezit, which means to flatter in an eager, fidgety kind of way.

Svidrigailov was a real person

Although the historical Svidrigailov wasn’t, as far as we know, the same kind of unfaithful-rapist-child molester his fictional counterpart is, neither does he have any of the redeeming features—helping the prostitute Sonya and finding a home for her family. The real Svidrigailov was known in the St. Petersburg of the 1860s as the minion of a provincial landowner. The name was in fact often employed in conversation to denote a type of shady dealer and intriguer.

Most of the news tidbits found throughout the novel are authentic

This is most notable when Raskolnikov inspects the papers while seated at a tavern, as well as in the ensuing, delirious conversation he holds with the young policeman Zamyotov. The precise incident they end up talking about did in fact happen: the story of a gang of 50 counterfeiters, which included a university lecturer, was reported in the Moscow Gazette in 1865. As was the account of the nervous accomplice who went to the bank, aroused suspicion, and sunk the whole operation. 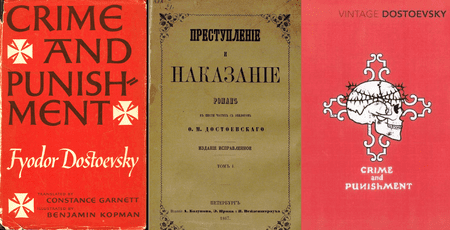 Covers of various editions: the 1956 Random House printing, the original full 1867 Russian edition, and the modern Vintage edition. | Courtesy of the publishers.

Russian readers know something about Dunya others can only guess at

Towards the end of Crime and Punishment, Raskolnikov’s sister Dunya holds a memorable conversation with her would-be suitor and former employer Svidrigailov, who reveals that her brother is a murderer. In the Russian original, Dunya, in shock, begins addressing the man in the familiar second person singular, a mode usually fit only for family and intimate friends. This suggested to Russian readers that their relationship was more than first appeared. She ends up trying to shoot him (of course) before running away herself, leaving him to commit suicide not too long after.

The Frenchman Fourier’s utopian socialism, very influential at the time, is referenced throughout the book. From ‘phalanstery,’ a concept used to denote a future communal society and mocked by Razumikhin, to a direct quotation from Victor Considérant, a noted follower of Fourierism—”I’m carrying a little brick for universal happiness, and so there’s a feeling of peace in my heart”—used by Raskolnikov, and counting the entire character of Lebezyatnikov: its influence is omnipresent. So, too, is nihilism, explored to remarkable effect during one of the many tense conversations between Raskolnikov and Petrovich, as well as those the protagonist holds with Sonya.

There’s a lot of Dostoevsky in Raskolnikov

Unsurprising, perhaps, but worth noting — Crime and Punishment contains three important memoir-like passages. The first is the dream recounted early on, in which a young Raskolnikov bears witness to an owner beating his horse to death; the memory is at least partly autobiographical. The author reveals in his notes that he vividly remembers a broken-winded horse he had seen as a child.

So, too, is the feeling the character gets after helping Marmeladov’s widow and her children—”might be likened to the sensation of a man condemned to death who is suddenly and unexpectedly granted a pardon.” This image closely mirrors Dostoevsky’s own near-death sentence in 1849, when, after having been arrested for his association with Fourierist circles, his sentence was commuted by a letter from the Tsar, and so minutes before his supposed execution.

Finally, of course, Raskolnikov’s imprisonment in Siberia is informed by the four years Dostoevsky spent as an inmate in Omsk for the political crimes mentioned above: “Siberia. On the banks of a wide, desolate river stands a town, one of the administrative centers of Russia; in the town there is a fortress; in the fortress, a prison.”