8 Must-See Places From Bulgakov's 'The Master And Margarita'

The Master and Margarita is one of the best-loved works in all of Russian literature. One day, the devil and his cronies arrive in Soviet-era Moscow and chaos ensues. The people and places that feature in the novel anchor it in a concrete, real-life Moscow, something that makes it even more fascinating to read. We’ve put together a list of the top eight must-see sites you should visit to indulge your love of Bulgakov’s masterpiece. 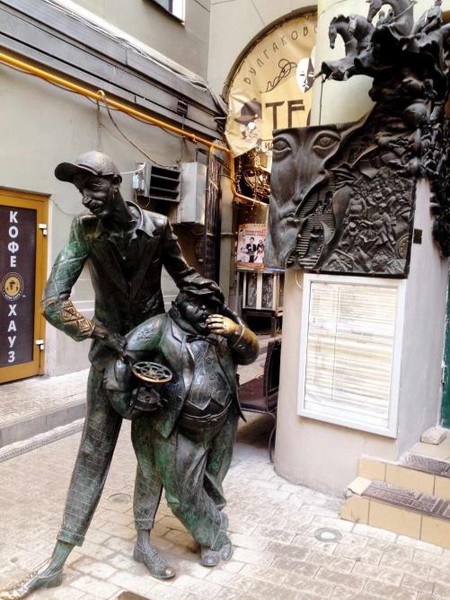 The statue outside the Bulgakov House Museum | Courtesy of Ruth Moore

The newer of two museums paying homage to the author based at the same address, the M.A. Bulgakov Museum was set up in 2007 via a government initiative. During the 1930s, Bulgakov lived in a communal apartment in flat number 50 on the fifth floor of an art deco building in central Moscow. This flat is now open to the public, giving a good idea of what communal living might have been like during the Soviet era.

The real crowd-drawer, however, is the stairwell leading up to the flat. Long before the museum’s official inauguration, Bolshaya Sadovaya ulitsa no 10 had evolved into a spiritual pilgrimage spot for the author’s many fans. Travelers and locals alike would enter the building to catch a glimpse of the location that played such a pivotal role in one of Russia’s best-loved novels. It became customary to graffiti the stairwell with quotes from the novel, wishes for the future and declarations of love in honor of the Master and his Margarita.

To enter, ring the doorbell of number 50, as the building is still a functioning apartment block. Follow the winding graffiti up the stairs and pay a small entrance fee to explore the rooms on display.

Situated on the ground floor of ulitsa Sadovaya, the Bulgakov House Museum houses a quaint collection of newspaper clippings, books and memorabilia about Bulgakov’s life. Whilst perhaps less authentic than number 50 next door, it boasts a plush red carpet, diabolical statues, a 1930s tea room and a tram replica to amuse anyone familiar with the novel.

The museum organizes regular excursions for real literary lovers. These allow you to visit a number of the key places in Moscow associated with The Master and Margarita — you might even, on occasion, meet characters dressed up as key protagonists from the novel. If you’re really keen, there’s even a satirical statue of two of the devilish characters from the novel outside the building, offering the perfect photo opportunity for Bulgakov fanatics.

It’s worth noting that the haunted apartment that the devil and his cronies take over in The Master and Margarita is situated at 302-bis, rather than number 10, a reference by Bulgakov to the complexity of the Soviet administration at the time of the novel. 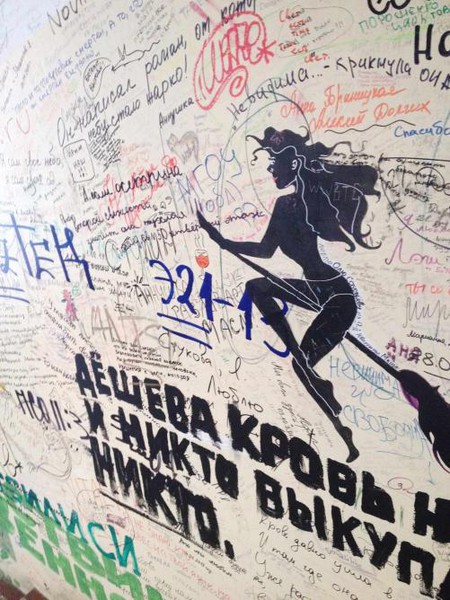 At the sunset hour of one warm spring day two men were to be seen at Patriarch’s Ponds.

So begins Bulgakov’s The Master and Margarita. Patriarch’s Ponds is just a couple of streets away from ulitsa Sadovaya and the museums and well worth the visit. Now an affluent area of Moscow, the ‘ponds’ have been reduced in modern times to one simple oak-tree lined pool bordered by handsome buildings, walkways and various benches on which to daydream. A tongue-in-cheek sign proclaiming it is ‘Forbidden to speak with strangers’ offers a nod to the spot’s literary heritage.

Bulgakov often visited the location and is rumored to have wooed his second and third wives under the dappled light of the overhanging trees. If you fancy a bite to eat, head over to Cafe Margarita, which takes its inspiration from the novel. The first cooperative cafe in Moscow, its old-fashioned décor, home-cooked Russian cuisine and live music from classically trained musicians make for a delightful evening. It’s worth booking a table in advance. 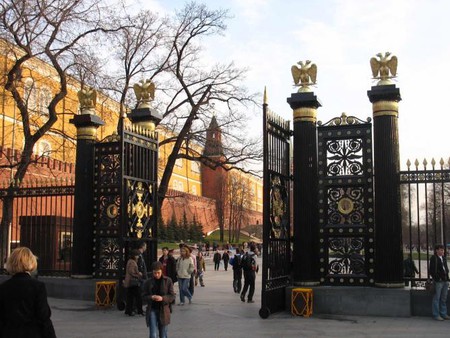 During the novel, Margarita takes a seat under one of the Kremlin walls, affording a view of the Manege. She views Berlioz’s funeral procession as it trundles past her and meets Azazello, a fanged redhead who confirms that her beloved Master is still alive.

The Manege is considered to be one of the finest architectural examples of late Classicism. Built in 1817, it was intended to celebrate the 5th anniversary of victory over Napoleon. The Manege was a remarkable achievement at the time, with a huge hall with an overhanging roof that featured no internal supports. It also has a slight checkered history; first used for parades of horsemen, it became a depositary and art gallery for the Kremlin during the Soviet era. In 2004, a fire caused the entire ceiling to collapse, with only the walls remaining. It was rebuilt and opened again in 2005, when it featured the same exhibition it was due to show on the day it burnt down.

The Alexander Gardens were the first public gardens in Moscow and sit along the Kremlin’s western wall. Vibrant flowerbeds, imposing views of the Kremlin and beautifully laid-out paths invite you to take a leisurely stroll in the heart of the city. Take a seat on one of the many benches and see if, like Margarita, you encounter any interesting characters. 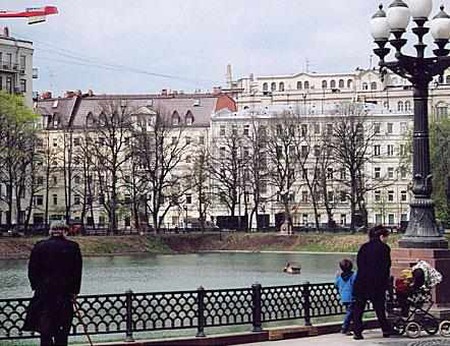 The storm had passed and a rainbow had arched itself across the sky, its foot in the Moscow River. On top of a hill between two clumps of trees could be seen three dark silhouettes.

The apocalyptic denouement of the novel takes place at Sparrow Hills. The Master and Margarita join with Wolland and his henchmen who create a pastiche of the Four Horsemen of the Apocalypse from Revelation. The elevated pitch of Sparrow Hills makes it the perfect vantage point from which they view Moscow and escape it.

Sparrow Hills (Воробьёвы горы) is named after the village that once stood there. Now a city park, it offers one of the best panoramic views of the city, along with a pedestrian embankment where you can hire bikes and roller blades. 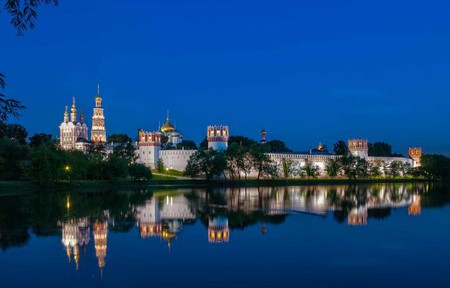 A stone’s throw from Sparrow Hills is Novodevichy Convent and its accompanying monastery. Undoubtedly the best-known cloister in Moscow, it is also exceedingly well preserved and has remained virtually intact since the 17th century — a huge feat considering the fate of many other religious buildings in the city.

The peaceful cemetery is the final resting place for some of the best-known authors, artists and politicians from Russia’s past. Bulgakov’s grave can be found here, along with stones and sculptures commemorating Gogol, Mayakovsky, Khrushev and Yeltsin.

In the novel, the Griboedov House is home to ‘Massolit’, a literary society headed by Berlioz. The first mention of the house is on the night the society learns of Berlioz’s unfortunate decapitation. Although the Griboedov House does not actually exist, it was named after a real person, the famed Russian playwright Alexander Sergeevich Griboedov (1795-1829).

The Griboedov House in the novel is claimed to bear more than a little aesthetic resemblance to Herzen House, where the eponymous author was born in 1812 and which hosted may literary gatherings during the 20s. Bulgakov appropriated the house for his novel as the perfect example of the rampant bohemian debauchery of the era, and the novel features a few ironic references to esteemed literary club members within. Now a museum, you can visit Herzen House yourself and enjoy the handsome old mansion whilst basking in some its unique mélange of myth and history.