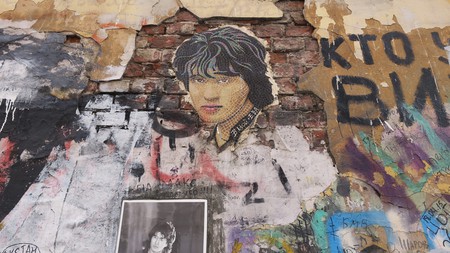 The emergence of Russian rock at the start of the ’80s signified a change for Soviet times. With a keen sense of disillusionment for the government that was failing to provide for them, the bands to emerge from this underground scene were rebellious and defiant – a political act in itself. They openly embraced both western and Russian music sensibilities and swept the younger generation away from government allegiances. Here’s a list of the main players who paved the musical way as the Soviet government began to loosen control.

Still cultural heroes, Kino was lead by the enigmatic Viktor Tsoi who was also the group’s main songwriter. As the Soviet Union opened up during perestroika and glasnost, Tsoi embodied the new-found freedom society was experiencing. The band came out of the Leningrad scene (now St. Petersburg), which was the heart of the Russian Rock movement. They formed in 1982 and released a score of studio and bootleg albums in the eight years they were together. In 1990, at just 28-years-old, Tsoi was killed in a car accident cutting his – and his band’s – bright future short.

With eccentric outfits, Zhana Aguzarova did Lady Gaga before Lady Gaga did. Before going solo, she headed Bravo, a band which came out of Moscow in 1983. Known for their style, as much as their music, Bravo was a new wave band that tipped its hat to early rock ‘n’ roll and jazz. As a singer, Aguzarova had already caught the KGB’s attention before joining the band. She eventually was detained in prison for a year, for ‘problems with her passport’. In 1985, after her release, the KGB invited Bravo to perform in part of a government-led rock music project, an initiative which was rumoured to have been created so to control the dissidence and rebellion in the scene. Aguzarova soon left Bravo, however, due to its growing affiliation with the government.

Not a band, but significant all the same, Vysotsky was an actor, poet, singer-songwriter. He earned himself the title of ‘the voice of the heart of a nation’ for his songs and poems that subverted the government and discussed the plight of the common people with clever wordplay and metaphor. The government refused to distribute and publish his albums as well as restricted his presence across media. And so he grew his loyal fan base through underground gigs in factories and clubs and distributed his work on the black market. Drug and alcohol addiction cut his life short, and in 1980, at just 42 years old, he died of a heart attack, a result of his vice-fuelled life.

Considered one of the founding fathers of Russian Rock, Grebenschikov continues to play with his band Aquarium today. Aquarium formed in 1972 in Leningrad. Aquarium initially played in the kitchens of communal apartments and sold millions of copies of these gigs on cassette. They only had their first album officially released after Gorbachov came into power in 1985. Until then, the State wouldn’t recognise Grebenschikov and his bandmates (who were all under surveillance) as professional musicians, and therefore couldn’t earn an income from Aquarium. Grebenschikov’s songwriting has been credited as the first to combine Russian literary sensibilities and Western rock, and his writing nods toward Bob Dylan as much as it does Leo Tolstoy.

One of the local bands that shaped the current thriving indie scene in Yekaterinburg, Nautilus Pampilius formed in the Ural’s first city in 1983 and were a key band in the Ural rock scene. Ural Rock, just like the band, was known for philosophical lyrics and brooding guitar-driven songs, with an occasional keyboard, flute or brass instrument to give the music a bit of pop. The initiative of Vyacheslav Butusov, the band survived many lineups, and seven musicians played in the band in different times. Resisting the lure of bigger cities, the band stayed in Yekaterinburg until it disbanded in 1997.

Created by Pyotr Mamonov, Zvuki Mu (translating to ‘The Sounds of Moo’) was formed in Moscow in 1983. Eccentric but respected, Mamonov was a musician whose music and art was deeply embedded in experimental, psychedelic rock and performance art. He, and the band, played alongside Aquarium and Kino in Leningrad apartment gigs. Although a cult figure in the 1980s who was caught up in Russia’s underground rock, art and theatre scene, Mamonov has evolved from punk artist to spiritual recluse, who lives his life away of the spotlight now.

Naumenko founded Zoopark in 1980, a band that would be known for its blues-inspired rock. Previously, he had played with Aquarium and had been a regular collaborator with Grebenschikov. Although Naumenko and Zoopark were hugely popular in the underground scene in Leningrad, neither Naumenko nor his band transitioned well into the mainstream upon Gorbechov’s relaxing of cultural control. Zoopark continued to record and play gigs but never really performed under the mainstream spotlight. Drug abuse and depression led to Naumenko’s death, immortalising him, and Zoopark, as darlings of underground Russian rock.