7 Instagram Accounts That Reveal the Many Sides of Russia 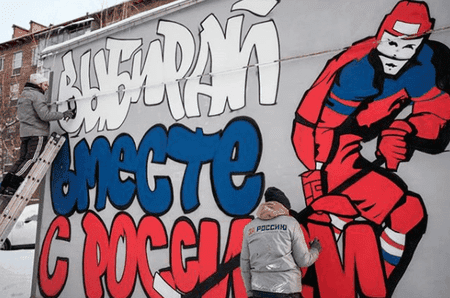 From the nation’s Soviet past to its new found freedom, from the wealthy cities to the remote villages, Russia has a reputation of intrigue. For many, much of life inside this land of contradiction remains a mystery. If visiting isn’t a near-future option, check out these Instagram accounts for a taste of Russian life.

A finalist on Russia’s Top Model, Maria Minogarova is now part of the jet-set elite that fill their days with fashion weeks and style trends. Although some models’ Insta accounts are full of trout pouts, product placement and glamorous selfies, Minogarova’s account, @minogarova, is a little more down to earth. She posts refreshingly candid moments of her goofing around and hanging out with friends in addition to the backstage shots and snaps with other famous people.

Everyday Russia is an umbrella account that posts photographs from all over the country. Snapped by local photographers and photojournalists, @everydayrussia presents a charming snapshot of the nation’s people across walks of life just doing their thing. Followers get a peek into the bedrooms and kitchens of locals, as well as social get-togethers, beauty pageants and weekend activities. Scroll through and stumble across a game of paintball played in bunkers on the outskirts of Moscow, get caught up in a snow storm in Krasnoyarsk and take a peek inside a dairy farm in the Kantemirovskaya district.

A documentary photographer and working mother, Skorobogatova’s feed, @j_skorobogatova, mainly captures the hectic life of raising young children, which she does with grace and a dry sense of humour while demonstrating that a mother’s life is universal. Skorobogatova snaps her kids at home and takes the camera out on family excursions. The feed also has some lovely shots taken around Moscow. This account shows just how difficult it is for a parent to grab a minute’s peace and multitask, but also offers candid moments of mother-child love and family intimacy.

Ever wonder how the ridiculously rich live? Forbes reported that as of 2017 there are 96 billionaires in Russia with a combined worth of $386 billion USD. A 2017 article in The Moscow Times reported that 1% of the population holds up to 25% of the nation’s wealth. Russian oligarchs – and their offspring – aren’t known for leading modest lives. Instagram feed @richrussiankids is filled with people who flaunt their parents’ wealth. Think luxury cars, flashy clothes, designer everything, private jets, leggy models and the occasional wild animal.

Victoria Bonya’s Instagram account, @victoriabonya, is mostly what you might expect from a reality TV star and glamazon who is accustomed to the finer things. Her feed is flashy and ritzy, and mainly filled with photos of Bonya posing in well-staged selfies. Having worked her way up from a small-town girl to a member of Russia’s elite, her account reflects her ability to sell herself – glamour shots, product placements, glossy pouts, photoshoots and images of some of the most luxurious cities in the world, including Dubai, Monaco and Moscow. She has also posted pics of herself at the hairdresser and casually hugging a white tiger, as well as some photos of her daughter.

Dina, a local Kazan city tour guide, reveals just about every nook and cranny of her home city on her account @kazanwalks. She basically provides a tour of Tatarstan’s capital city. The feed is full of shots that feature daily street life and show off some of the city’s best sights, including the old Tatar settlement and the Kremlin, and she occasionally features a home-cooked regional delicacy.

This ordinary fisherman finds more than just the odd boot. Hailing from the Arctic Circle port town of Murmansk, Fedortsov’s feed, @rfedortsov_official_account, documents some of his more unusual and really just mind-blowing finds. He started the account while working in the Atlantic off the coast of Morocco, and he decided to share the terrifying-yet-fantastical beasts he wrenches up from the depths of the ocean. Be prepared for crazed sets of teeth and cold glassy stares of unimaginable marine life.