7 Famous Films That Are Banned in Russia 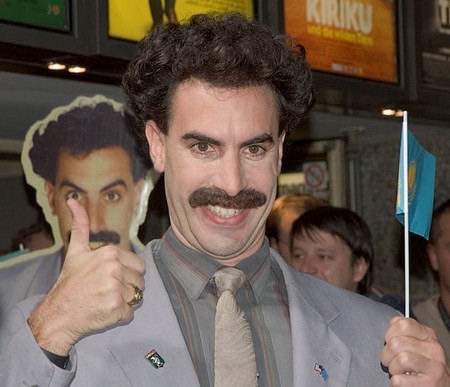 With a history peppered with conflict and mistreatment, the Russian government is a little sensitive about how they, and former Soviet states, are represented on the big screen. They also appear to be guardians of Russia’s moral compass. From clever satire to absurd comedy to war stories, these seven films will never be seen on the silver screen in Russia.

It’s no surprise that the darkly comedic Death of Stalin has been banned from Russian distribution. The English film pokes fun at the backstabbing and chaos that followed Stalin’s death and portrays the events and characters with a sense of buffoonery. Russia doesn’t see the funny side of director Armando Iannucci’s comedic interpretation of what was quite a tumultuous and uncertain time, with one government official labelling it ‘despicable’. Despite this, a Moscow arthouse cinema screened it, until authorities enforced the ban.

Russia banned Sasha Barren Cohen’s hit spoof arguing it mocks the post-Soviet state of Kazakhstan. The mockumentary follows Borat as he travels through America making sexist, racist and homophobic comments, and playing out ridiculous situations on unsuspecting Americans. The Russian Ministry of Culture failed to see the humour in it, arguing it offended ethnic and religious minorities.

The Russian Ministry of Culture accused the Serbian film Clip of being child pornography, and therefore, illegal. The film is about a teenager who is dealing with her family falling apart. Despite winning awards at the Rotterdam International Film Festival, and the Vilnius International Film Festival, the scenes depicting realistic sex between minors were deemed too risqué for Russian audiences.

A Hollywood thriller set in Stalin’s Soviet Union, the Russian government cited historical inaccuracies as the reason for its ban. Produced by Ridley Scott, it is loosely based on the true story of serial killer Andrei Chikatilo who was convicted of killing over 50 women and children in the Soviet Union between1978 and 1990. The film was pulled just a day before it was set to be released. The Russian government claimed it would be inappropriate to screen it so close to the 70th anniversary of WWII, and the film was never scheduled for future screenings.

The only Russian film on the list, Ordered to Forget portrays the mass deportation of the Chechen and Ingush people who were native to the North Caucasus in 1944. The Ministry of Culture officially claims that the film dredges up old ethnic tensions and incites hatred. The story follows the lives of the locals as they endure one of Stalin’s purges, that collectively saw the deportation and expulsion of over 700,000 minority groups, which perhaps is a time in history the government is not keen to dredge up.

Another satire, The Interview tells the story of two journalists on a mission to assassinate Kim Jong-Un. Starring Seth Rogan (who also directed it) and James Franco, the film saw problems in many parts of the globe. Thanks to a savage sense of humour ruffling political feathers, America postponed the film’s initial screening, and then gave the movie a limited release. Russia also initially postponed the premiere, however, decided The Interview wouldn’t see the big screen after pressure from North Korea.

Another film that portrays Stalin’s extreme treatment of minority groups, Haytarma is a Ukrainian film about the 1944 deportation of the Crimean-Tatars. In another attempt to brush over past atrocities, the Ministry of Culture placed a general ban on the film, despite it taking out several European and Russian film awards. The forced deportation of close to 200,000 people from Crimea to the Central Asian nations, was only recognised as genocide by the Russian government in 1989 – over forty years after it occurred.