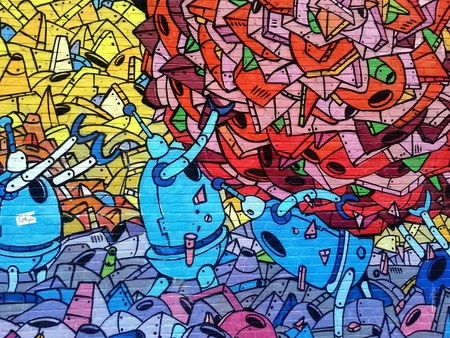 Street art in Russia has been growing over the last 15 years with the last decade raising the status of street art in Russia: this was when the first festivals and exhibitions took place. 2014 saw the first Moscow Street Art Biennal Artmossphera (exhibition). Since then, Russian street art has changed quite a lot: some artists received their first commissions, and the whole movement has become more accepted. Here are seven street artists who have contributed greatly to the development of the Russian street art scene.

Kirill Kto is one of the most famous Russian street artists. Recognised for his distinctive ‘verbal’ style, the pieces by Kirill Kto are easy to recognise among the work of other street artists. Kirill Kto has quickly gained the recognition and in 2012 was one of the top 50 most influential people in Russian art according to Artchronika magazine. 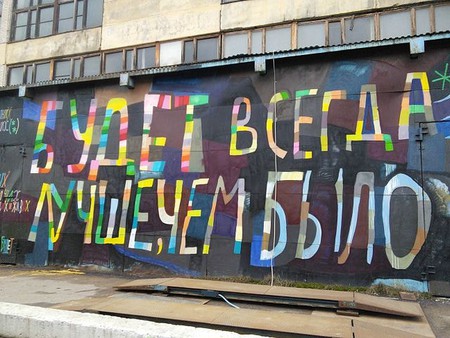 Most of Petro’s works are very graphical, abstract and often painted on large scale surfaces. He is the author of one of the biggest murals in Russia – located in St Petersburg, the piece was created on the wall of a nine-storey house. The size of the mural is impressive 74 x 7 metres.

His artworks often criticise the current political situation and he organises the Monstraciya parade in Novosibirsk, which is highly disliked by local government but supported by the artistic community. Loskutov’s works are usually a reaction to daily news and politicians’ quotes and actions.

One of the most outstanding and bright street artists in Russia today, Tima Radya is famous for his ironic style, depicting society’s problems. Some of his works are so provocative that they have instigated a conflict about certain issues, which is one of the main goals of street art: opening a dialogue.

Slava Ptrk is one of the most ironic street artists on the Russian art scene. His visual style is minimalistic but very eclectic too. Using a lot of text messaging in his works, Slava Ptrk reacts to the burning issues of Russian society today.

Being a journalist by education, Maxim Ima often adds some life to his painted characters, letting them express their thoughts, whether it’s a quote from an ancient philosopher or a snappy phrase from the contemporary world.

Starting his graffiti career in the late 1990s, Zmogk has developed his style switching from calligraphy to more abstract forms. He is one of the most recognised street artists who manages to maintain their unique style while also finding a way to collaborate with brands and other artists.