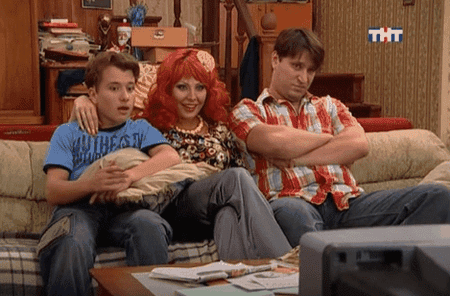 Although the Soviet Union maintained a hard-line on banning Western pop culture, it wasn’t able to quash Russia’s love of a good American sitcom. First broadcast in the early 1990s as the communist state dissolved, these TV shows initially rated poorly because the Russian public didn’t identify with situations presented in the sitcoms. However, as time went on, many classic characters and TV shows became so popular that Russia went on to make its own versions of them. Here’s a list of some of the most popular.

How I Met Your Mother

The remake of this American long-running favourite was so true to the original, the Russian cast were almost doppelgangers of their American counterparts. How I Met Your Mother Russified fairly smoothly. Perhaps this was due in part to the original’s archetypal characters and exaggerated style, which lent itself well to Russia’s penchant for slapstick. Despite this, the adaptation didn’t fare well. The American series ran for nine years with more than nine seasons, but the Russian version (which goes by the same name) only lasted two seasons, between 2010-2011. So no one will ever know how Dima (the equivalent of Ted) met the mother of his children.

Initially going by Everybody Loves Kostya, this remake of Everybody Loves Raymond now goes by Voroniny (The Voronins). As details about the adaptation process were revealed in the documentary Exporting Raymond, cultural differences clouded the portrayal of the suburban middle class, domestic life and the depictions of gender roles. Even the humour caused a debate between cultures. Despite the show’s rocky beginnings, the award-winning remake has been on-air since 2009 and has made 21 seasons in its 17-year-run, so clearly, it did a few things right.

During its time, Russia’s version of Married with Children, Schastlivy Vmeste (Happy Together), was so popular that over 100 new episodes were written after the series exhausted the American scripts. Running for six seasons, between 2006-2013, the remake stayed true to the original in that it satirised suburban domestic life, despite Russification. Chicago was swapped for the industrial sprawl of Yekaterinburg, and Al and Peg Bundy became Gena and Dasha Bukin, who were also parents to two dopey kids. Retaining the same sense of functional chaos, the show revolved around Gena and Dasha swapping sassy insults and vulgarities with each other, and the ridiculous activities of their offspring.

Even the new title of this adaptation was a joke. With a nod to the American version, the central bar was called Philadelphia, not Paddy’s Pub, and the dynamics of the core group of underachieving friends remained similar. Episodes of the Russian remake of It’s Always Sunny in Philadelphia were cobbled together from multiple scripts instead of adapting each episode. However, culturally specific scenarios relating to social issues like homophobia and racism proved hard to translate, and so the situational humour got lost in translation. So It’s Always Sunny In Moscow was short-lived, lasting only one season in 2014.

Depending on translation My Wonderful Nanny, or My Fair Nanny, was the Russian version of The Nanny, first broadcast in 2004. It was another adaptation that proved to be a big hit with Russian audiences, so much so it also ran out of original episodes and new scripts were commissioned by the American writing team. The American original, as well as international remakes, have proved to be hugely popular in non-American markets, including Russia. Perhaps this is due to the universality of the class divide. In the Russian remake, the nanny, Vika, is a young bucolic girl from Ukraine who finds herself in the big smoke of Moscow. She falls in love with her employer, Maxim, who is still a big-time theatre producer.

The literal translation of the Full House remake was House Family; however, it also went by The House Is Upside Down and the Topsy Turvy House. The scenario of three men raising three girls was a fairly foreign concept to a Russian audience, and one that was difficult to translate. Despite retaining many of the character arcs and plot lines from the original series (even the youngest daughter was played by twins), tweaks had to be made to account for cultural differences. Despite House Family’s slowly growing fan base, the remake didn’t quite last as long as the original did. House Family ran for only 40 episodes over two seasons in 2009, cut short when one of the lead actors wanted to pursue a career in film instead.