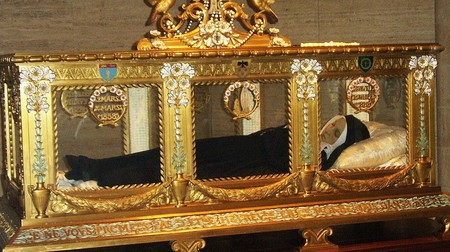 Humans have had the peculiar habit of preserving the bodies of their rulers and loved ones for as long as we’ve existed. When it comes to some of the world’s most infamous and controversial leaders, the bodies are put on display so that those loyal to them can pay their respects. Here are 15 famous corpses that you can visit.

Lenin’s body was taken to the Red Square and displayed shortly after his death in 1924. It is remarkably unchanged because of the preservation methods used on the corpse. Lenin had black spots on his skin, and these various imperfections were treated with a mixture of acetic acid and vodka. Under the Soviet Union, the government paid the staff responsible for continual preservation efforts. After Stalin’s death in 1953, his embalmed body was put next to Lenin’s, and it remained there for eight years until it was removed in an effort to de-Stalinize the country. Lenin’s body is still in the Red Square today and open to the public.

When Kim Jong-Il died in 2011, North Korean officials summoned Russian scientists to help with the embalming. You could say the whole Lenin corpse display thing made Russia a bit of a trendsetter in this regard. His body now rests in a glass sarcophagus where it serves as a major tourist attraction. The glass is filtered so that it keeps North Korea’s beloved dictator’s complexion rosy. A bright red blanket is draped over him, and the sarcophagus is surrounded with matching crimson flowers. Kim Jong-Il’s father, Kim Il-Sung, was also embalmed and placed on display nearby.

Memorial
Facebook
Email
Twitter
Pinterest
Copy link
Share
Map View
Ho Chi Minh was one of Vietnam’s most respected leaders. He led the Viet Minh Independence Movement and served as the country’s prime minister. Minh died of heart failure in 1969, and an enormous mausoleum was constructed in his home city of Hanoi. Inside, his body remains on display just as many of the world’s other communist leaders. After his death, the capital was renamed to Ho Chi Minh City, and today, the Vietnamese government works hard to maintain his puritanical image as the father of Vietnamese independence. For example, any publications about Ho Chi Minh’s relationships with women are banned in the country.
Open In Google Maps
2 Hùng Vương, Hà Nội, 100000, Vietnam
+842438455128
Visit Website
Give us feedback

Mao Zedong was the leader of the Communist Party of China, and he served as its chairman for nearly 30 years. He is certainly a controversial figure that is often compared to Stalin. While Mao hugely contributed to the creation of a unified, modernized China, the lengths to which he was willing to go in order to achieve his goals are undoubtedly brutal. His body remained on display for one week after his death. It was then encased in a crystal coffin and moved permanently to his mausoleum, which was built on Tiananmen Square. It is guarded by heavily armed military personnel but remains a popular tourist destination to this day. 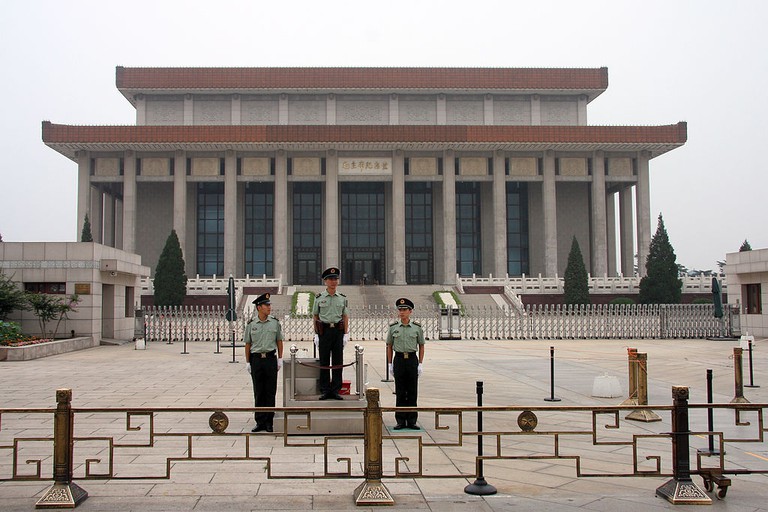 Hugo Chávez, Venezuela’s controversial socialist president died in 2013. In the fashion of his socialist and communist predecessors, Chávez was supposed to be embalmed so that his devotees could view his body on a permanent basis. Unfortunately, there were complications involving the process, and the body was not prepared quickly enough. For a body to be successfully preserved, the embalming process must begin within the first few hours after a person dies. Further, the warm Venezuelan climate made preserving the corpse even more difficult. Still, it is possible to visit Chávez’s tomb at the Military Academy in Caracas. 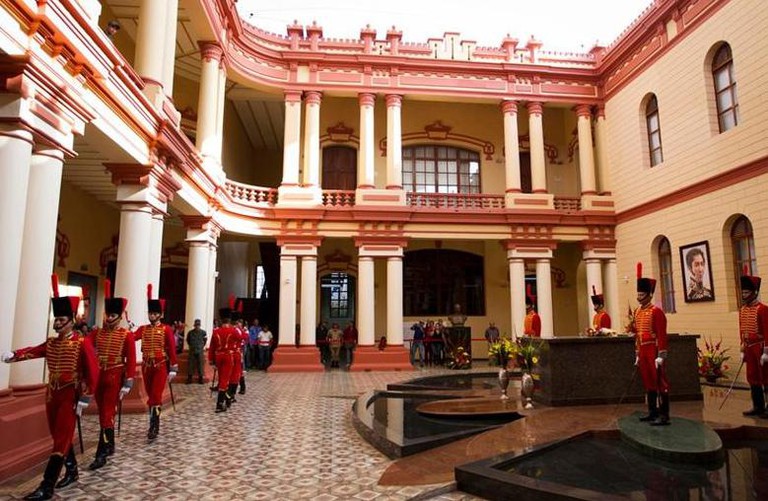 Museum, University
Facebook
Email
Twitter
Pinterest
Copy link
Share
Map View
Mummy Juanita has many nicknames including ‘the Inca Ice Maiden’ and ‘the Ice Princess.’ It is evident from the signs of severe head trauma in her skull and the location of her body on the summit of Mt. Ampato in the Peruvian Andes that she was a child sacrifice. Experts believe she was around 12 years old at her death, which occurred more than 500 years ago. The freezing temperatures naturally mummified her, and she was extraordinarily well preserved, giving anthropologists and scientists a rare insight into Incan life. Today, you can visit her body at Catholic University’s Museum of Andean Sanctuaries in Peru.
Open In Google Maps
Arequipa, Peru
Give us feedback

Museum
Facebook
Email
Twitter
Pinterest
Copy link
Share
Map View
Throughout history, dead rulers have been preserved with fantastic grandiosity, and considering his legendary persona in life, it’s no surprise that Napoleon Bonaparte’s burial would follow suit. After much speculation surrounding his death, scientists have confirmed that Napoleon died of a malignant stomach tumor. Two days after he died, a cast was taken of Napoleon’s head, and he was placed in a tin coffin with three outer shells made of wood, lead, and mahogany. Some years later, the coffins were placed in a porphyry sarcophagus and then put on display in Les Invalides in a marble hall that is open to the public.
Open In Google Maps
Paris, France
Give us feedback

Museum
Facebook
Email
Twitter
Pinterest
Copy link
Share
Map View
Ferdinand Marcos was a Filipino president turned dictator that ruled the country from 1965 to 1986. His regime was riddled with cruelty, extravagance, and was notoriously corrupt. Marcos died in exile, and his body was kept in a refrigerated mausoleum in Hawaii until 2001 when it finally returned to the Philippines. His wife Imelda refuses to have him buried without military honors, but citizens heatedly protested any plans to have the Marcos buried on Filipino soil. Thus, the body has remained on display in a glass coffin at the Marcos family mausoleum in the village of Batac, Philippines.
Open In Google Maps
Batac, Philippines
Give us feedback

St. Bernadette was a French girl of humble origins that bore witness to apparitions of Mary, the mother of Jesus or ‘Our Lady of Lourdes.’ Following her death, religious members of her community, as well as two doctors, observed that her body appeared incorrupt from decomposition. This was regarded as a miracle and ultimately contributed to her canonization. Eventually, a wax cast of her head and hands were superimposed over her real face and hands, which were beginning to decay. The body was then placed in a crystal coffin and remains on display at the Chapel of St. Bernadette in Nevers, France. 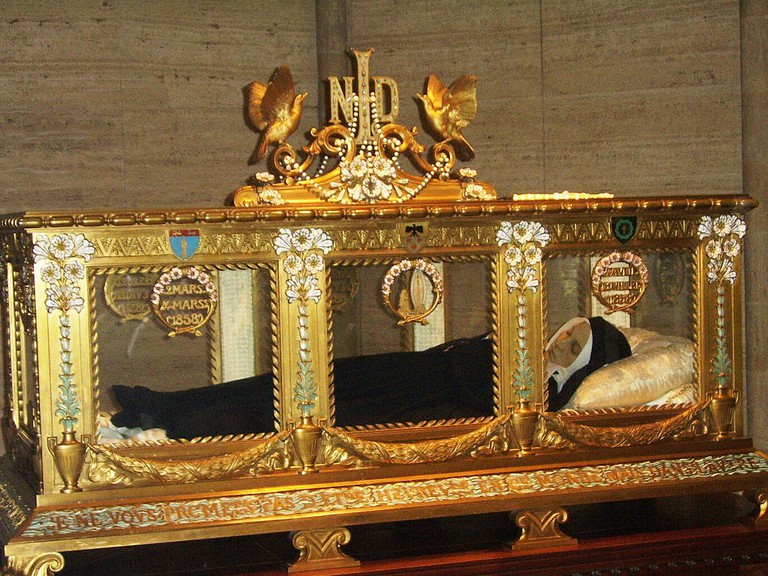 Museum
Facebook
Email
Twitter
Pinterest
Copy link
Share
Map View
Xin Zhui was the wife of the Marquis of Dai, Li Chang, during the Han Dynasty. Better known as Lady Dai, she gained notoriety more than 2000 years after her death when her tomb was discovered buried in a hillside in 1971. When workers opened her tomb, they found it to be remarkably well preserved. Her skin hadn’t decayed and her muscles and tendons were still malleable enough for her joints to flex. Along with Mummy Juanita, Lady Dai is considered to be one of the most important archaeological discoveries of the 20th century. Today, her remains are located at the Hunan Provincial Museum.
Open In Google Maps
Changsha, China
Give us feedback

Probably one of the most iconic preserved human corpses available to visit is that of King Tutankhamen. His tomb was discovered in 1922, and inside, there were many gold items and other treasures. The unearthing of King Tut’s tomb spawned a wave of renewed interest in ancient Egypt. King Tut’s mask is a popular symbol of ancient Egypt, and it has enormously impacted popular culture ever since. King Tut himself was a sickly boy king who died around the age of 18. His body is currently on public display at the Valley of the Kings in Egypt, and many of his funerary items are on circulation at museums around the world. 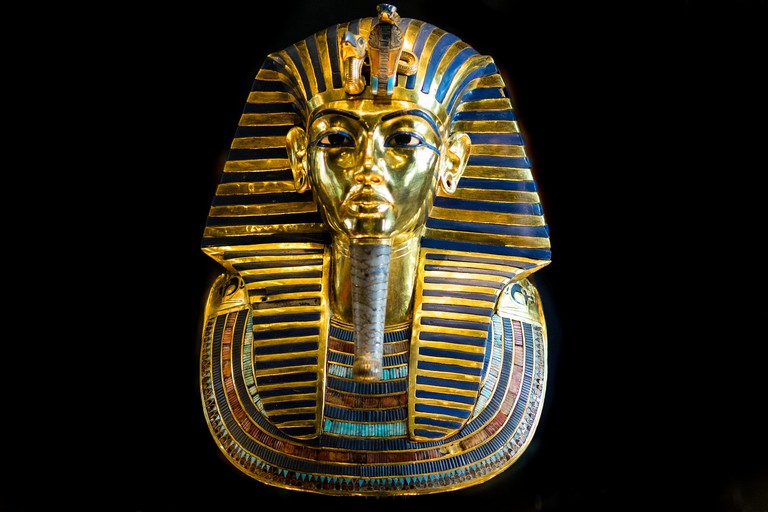 Commonly nicknamed ‘Sleeping Beauty,’ Rosalia Lombardo is an Italian toddler who died of pneumonia at just two years old. Her father, a wealthy official in their home of Palermo, was so heartbroken after her death that he had her embalmed to preserve her body. She is extremely well preserved, and all of her organs are still intact, but her body is beginning to show some discoloration. Due to an optical illusion involved the way light filters into the glass coffin, many have observed that Rosalia opens and closes her eyes. The body is located in the Capuchin Catacombs of Palermo, where the public can view it via guided tour of the catacombs. 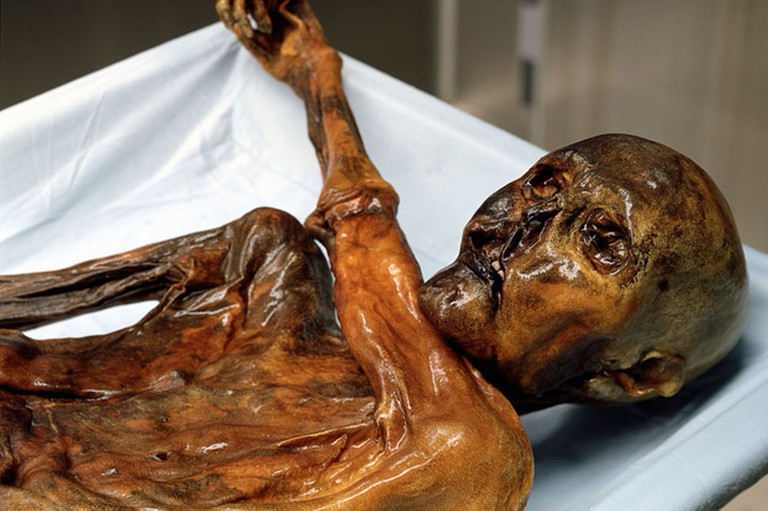 Ötzi the Iceman | © Gizmodo
Ötzi the Iceman is a mummy that is estimated to have died around 3,300 BC. He was found in the Ötztal Alps on the border between Italy and Austria. He is the oldest natural mummy ever found in Europe, and he offers remarkable insight into the lives of these early peoples. Interestingly, over 61 tattoos were found on Ötzi’s body. Some theorize that these tattoos were part of a healing technique used at the time that is similar to acupuncture. Either way, it is certain that Ötzi is the oldest tattooed mummy known to man. His body is located at the South Tyrol Museum of Archaeology.
Open In Google Maps
Bozen, Italy
Give us feedback

School, University
Facebook
Email
Twitter
Pinterest
Copy link
Share
Map View
The famed English philosopher and social reformer, Jeremy Bentham, was most known for his work in utilitarianism, gender equality, animal rights, law reform, and economics during the 18th and 19th centuries. Bentham requested in his will that when he died, his body be used in a dissection demonstration at an anatomy lecture. After the dissection, he asked that his remains be preserved as an ‘auto-icon.’ His preserved body is still on public display at the University College of London. The body is situated in a wooden cabinet at the school where it is propped up on a chair and dressed in his own clothes. His head has been cast in wax.
Open In Google Maps
London, United Kingdom
Give us feedback

Museum
Facebook
Email
Twitter
Pinterest
Copy link
Share
Map View
Tollund Man is another naturally mummified corpse that was found buried in a peat bog in Denmark. He is quite well preserved and said to have dated back to the pre-Roman Iron Age, dating back more than 2,000 years ago. In fact, he was so well intact that the men who found the corpse in 1950 believed it was the body of a recent murder victim. The actual circumstances surrounding his death aren’t entirely clear. He was found lying in the fetal position with his eyes closed wearing nothing but a pointed cap made of animal hide and wool. Scientists are inclined to believe that he was a human sacrifice. The body is now located at the Silkeborg Museum in Denmark.
Open In Google Maps
Silkeborg, Denmark
Give us feedback
Give us feedback