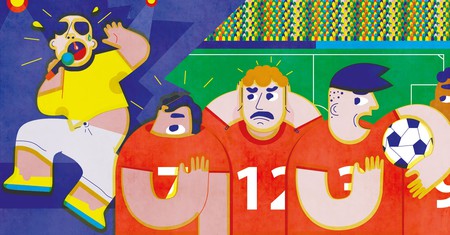 FIFA has certainly upped their game in recent years enlisting the likes of Shakira and Toni Braxton to lend their vocals.

Some tracks like New Order’s ‘World in Motion’ and Ricky Martin’s ‘La Copa De La Vida’ (‘The Cup of Life’) become bona fide classics in their own right. Sadly, these are few and far between. In fact, most of the time they end up being a fist-gnawing embarrassment.

Hollywood star and sometime rapper Will Smith has teamed up with Colombia-based reggaeton star Nicky Jam and Kosovo Albanian singer Era Istrefi on ‘Live It Up’, the official 2018 FIFA World Cup song.

The track, produced by Diplo, is an uplifting reggaeton anthem with the lyrics urging listeners to make the most of their lives.

But there are plenty of other World Cup songs that are still seared into our memories.

Here’s our round-up of the ones we love to hate.

The Spice Girls, the biggest girl band of the ’90s, were at their peak when they recorded this song. Teaming up with indie stalwarts Echo & the Bunnymen, Space and Ocean Colour Scene, you’d expect much more from their combined efforts.

Credited together as England United, this amounts to nothing more than an inconsequential indie-lite singalong. Scary, Posh, Baby and co especially are wasted on this, reduced to glorified backing singers on a track that could’ve used some of their famous pop hooks.

Remember Crazy Frog – that extremely irritating animated amphibian who managed to ‘ding’ his way to number one in the charts back in 2005? A year later he was annoying the hell out of everyone by covering Queen’s classic ‘We Are the Champions’. It was a surprise hit in France staying at number one for five weeks there.

England’s World Cup squad nearly scored a number one hit with this tune after Ron Greenwood’s team headed to the famous Abbey Road Studios in West London to record the track. To be honest, this sounds more like a football chant coupled with a marching band rather than an actual song, although its cheery ‘rockney’ melody means it wouldn’t sound out of place on a Chas & Dave album.

Britain’s favourite presenter double act Ant & Dec were no strangers to the charts after launching their music career as PJ & Duncan, but ‘We’re on the Ball’ can’t compete with their breakthrough hit ‘Let’s Get Ready to Rhumble’. Taking a break from hosting every single show on TV, they were persuaded to distil their cheeky chappy essence into this jaunty ska track that pays homage to Sven-Göran Eriksson, who was England manager at the time.

French composer Jean-Michel Jarre, known as the ‘Godfather of electronic music’, has sold over 80 million albums and has had an asteroid named after him. Who can forget the futuristic pulsating beats of his most famous song ‘Oxygène Part IV’?

But his talents were wasted when he teamed up with Japanese producer Tetsuya Komuro on ‘Together Now’, an attempt to push the World Cup into a clubby direction. The high-energy dance track features a breakbeat intro and piercing vocals from singer Olivia.

Cuban-American rapper Pitbull gets into the carnival spirit with ‘We Are One (Ole Ola)’, a tribute to World Cup host country Brazil. He duets with US singer Jennifer Lopez and Brazilian singer Claudia Leitte on the track, although the latter only features for a grand total of 14 seconds. All three co-wrote the song, which mixes pop with samba and Afro-Brazilian group Olodum’s style of drumming.

Want to listen to something rousing and inspiring as you support your country to victory? Then ‘Don’t Come Home Too Soon’ might not be for you. Del Amitri’s dreary folk song, a dismal attempt at an anthem for Scotland, is the very definition of a ‘downer’ as the group beg their country’s national team not to embarrass them via mournful lyrics.

The same year that England had one of our best anthems ever – New Order’s ‘World in Motion’ – the West Germany football team came up with this ‘gem’. Cheesy as hell with a budget video full of mullets to go along with it, this should have been given a straight red. Thankfully for them, they were much better at their day jobs than singing and ended up winning Italia ’90.

Obviously, 1990 was the year that keeps on giving when it comes to crimes against music. You’ll be wishing that you could bid ‘ciao, ciao’ to this song the second it starts to play. Sung half in Italian and half in Swedish by the group After Shave and the Sweden squad, this slice of trashy Europop would probably go down a storm at Eurovision.

Former Marillion frontman Fish tried to instil a sense of national pride in Scottish fans by calling on the ‘nation so small’ to ‘walk tall in the sun’. The chorus comes courtesy of the Scottish World Cup squad and friends, but even they can’t help this be anything more than a ham-fisted mess.

11. Village People and Germany Squad – ‘Far Away in America’

The only song on the list that is so bad it’s actually good. Kind of. American disco group Village People sing it with the same joyful bravado that can be found on their classic hit ‘YMCA’. They’re so enthusiastic that you end up being swept away in the naffness. The German squad also join in the fun, although they really need to work on their lip syncing skills.