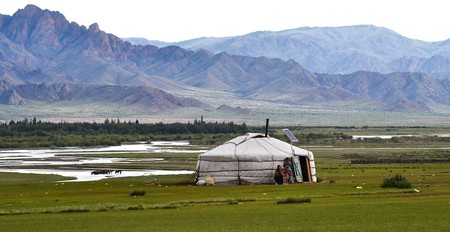 Russia is a vast and mysterious country that stretches across multiple time zones and climates. If you have plans to visit Russia and want to discover more of its natural landmarks, lakes or even volcanoes, you’re in luck! We’ve put together a list of Russia’s most breathtaking natural landscapes.

The Altai Mountains are considered to be one of the most beautiful natural ranges in Russia. The panoramic views from the mountain tops are truly unique and unforgettable, especially when you take into account that the colour pallet changes with every season. The mountains are in Central and Eastern Asia bordering Russia, Mongolia, Kazakhstan and China. What makes them even more attractive to visitors is that they’re not easy to get to. Visitors feel like they are the first to see this wild landscape. The natural parks around the mountains are quite different; some areas are very cold and covered with snow year-round, while other areas are located near the low-lying Russian Taiga where the climate is mild.

The Kamchatka Peninsula is the only part of Russia that is covered in volcanoes and thermal baths. Only here can you see an active volcano surrounded by ice in spring or summer. The peninsula is surrounded by lakes, rivers, seas and oceans, and it’s quite windy. Klyuchevskaya Sopka, a strato volcano and UNESCO World Heritage Site, is considered to be the largest volcano in Asia and Europe. Unfortunately it’s really hard to predict eruptions in this area; however, they don’t happen often, so go ahead and book your flight. The best time for a visit is from May to mid-September. It is easiest to access from Petropavlovsk-Kamchatsky airport, or by boat from Japan.

Baikal lake is undoubtedly one of the largest, oldest and deepest lakes on the planet; it’s so huge that some people even compare it to a sea or an ocean. It is most definitely a ‘must see’ destination in Russia. The lake’s water is some of the cleanest and freshest in Russia and contains approximately 23 percent of the Earth’s fresh surface water. The best time for a visit is from mid June to October, when the Great Baikal Trail surrounding the lake is easiest to traverse. But if you’re a fan of winter landscapes, we highly recommend you visit in December. The lake becomes frozen and you can see extraordinary amounts of crystal clear ice.

The Golden Ring of Russia

This spot is undoubtedly one of the main historical and natural centres of Russia, curated and protected by the Russian government. The landmarks of the Golden Ring are all UNESCO World Heritage Sites, which speaks to their importance. It comprises eight towns built between the twelfth and eighteenth centuries. With cathedrals, churches, monasteries and kremlins erected in each town, the Golden Ring played a pivotal role in forming the Russian Orthodox Church. Only here you are able to see a typical northern natural landscape surrounded by ancient buildings, which are now open to public.

The small republic of Karelia, located in northwestern Russia, is considered to be one of the most beautiful places in the country. This place provides an opportunity to view a unique mix of Finnish and Russian landscapes full of waterfalls, lakes, gardens, forests and trees. Ruskeala is a beautiful village located near a mountain park and a crystal clear lake surrounded by marble canyons and forests. If you’re travelling from Saint Petersburg or Helsinki, you must visit this stunning destination.

Probably one of the coldest parts of Russia, but extremely beautiful, the land of Yakutia is located right in the middle of Russia’s far eastern region bordering much of the Siberian Sea. As this is the largest of the Russian federal territories, and one of the least populated, it is a perfect place for photography tours and spending quality time in nature. The winters here are cold and long. The best time to visit is from mid April to September.

The Ural Mountains are among the oldest mountain ranges on Earth. They are also a huge natural border between Asia and Europe. The range’s natural landscape is truly picturesque and includes countless caves, hills, lakes, rivers and forests.

The Elbrus Mountain is located in the southern part of Russia, near the Georgian border. It is considered to be one of the highest peaks in Europe. Yet it’s more than a mountain, it’s an extinct volcano with twin cones. The weather here is very unpredictable throughout the year, so be careful and consult local guides when visiting. Elbrus Mountain is also one of the most accessible points to the seven summits of the Caucasian Mountains.

These mountains are located in southern Siberia and are highly recommended for exploring between mid April and September. Their outstanding beautiful landscapes include natural valleys, multiple lakes, mountain rivers and enchanting forests. The region was once considered a border between Russia and Mongolia, and many distinctive geological features originate from it, including the Yenesei River. The summer is short and cool and visitors can find wild strawberries, bilberries and raspberries growing. Siberian deer, chipmunks, owls, musk deer and reindeer can be sighted as well.

Located in Siberia, this nature reserve has plenty of cliffs, rocks faces, caves and stone hills for rock climbers. It’s a true paradise for nature lovers in general as it is full of wildlife.

Yessentuki is a famous natural historical resort town, located in Stavropol Krai, near the city of Mineralnye Vody. This place is very famous in Eastern Europe, especially because of its hot mineral springs full of salty mineral water.