11 Soviet Artists You Should Know

The Union of Soviet Socialist Republics, known as the USSR or the Soviet Union, was a state that existed from 1922 until 1991. It included countries such as modern-day Russia, Ukraine and Latvia. In the early years of the USSR, culture was a key part of the government’s agenda. Artists experimented with techniques and styles, producing artworks that were synonymous with the state. Here are 11 Soviet artists that you should know. 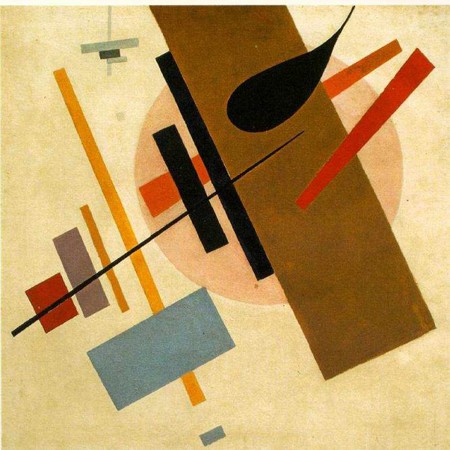 Born in Kursk, Aleksandr Deyneka began his artistic career as a photographer for the Criminal Investigation Department. He joined the army and was sent to study art at the Kharkov Art College and at VKhUTEMAS. These formative years shaped his creative style, and he went on to become a renowned Soviet painter, graphic artist and sculptor. He became a key figure of the modernist figurative style in Russia, with his earliest works monochrome in color as art supplies were hard to come by. Key works include Farmer on a Bicycle (1935), which has been praised for its social realist style. His works often depict labor or sport scenes, while his later oeuvre includes more monumental paintings, such as The Defence of Petrograd (1928). He also worked with mosaics, some of which are still a feature of the Mayakovskaya metro station in Moscow. Deyneka was also a founding member of the art group OST and Oktyabr.

Studying painting and architecture, Aleksandr Gerasimov was a prominent painter, architect, and theatrical designer in Russia. He studied under Abram Arkhipov and Konstantin Korovin. Following his return from the front during World War One, Aleksandr established the Commune of Kozlov Artists in 1918. The artists lived here in the Tambov Province from 1918 to 1925. After this, he returned to Moscow, where he became a member of the Association of Artists of Revolutionary Russia. It was during this time that his style drastically changed. No longer did he paint impressionist-style landscapes; instead, he adopted a social realist style. In doing so, he became a favorite artist of Joseph Stalin. This secured his position as an artist, and he became the Chairman of the Union of Artists and later the president of the Academy of Arts of the USSR. He won the Stalin Prize four times over the course of his career. 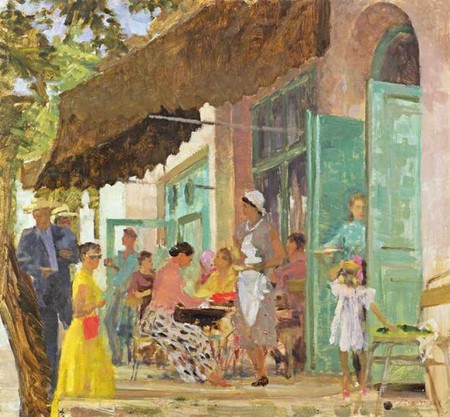 Painter, watercolorist and illustrator, Alexander Nikolayevich Samokhvalov was a leading member of the Leningrad branch of the Union of Artists of Russian Federation. Living and working in the city, Alexander Nikolayevich Samokhvalov is often regarded as one of the main figures of the Leningrad school of painting. Known for his oeuvre of genre and portrait painting, the artist honed his talents from Kuzma Petrov-Vodkin who was influential for his painting designs and fusion of form and color. His trip to Samarkand in 1921 marks a turning point in his career and is believed to have impacted his style significantly in the subsequent years. Five years later, he participated in the restoration of St George’s Cathrdral in Staraya Ladoga. It was here that he came in contact with traditional forms of Russian painting, which also had an impact on his own style. He had a wide artistic output, from book graphics to monumental paintings to innovative sculptures. Famous works include Sergey Kirov Greeting Parade of Athletes (1935) and Appearance of Vladimir Lenin in All-Russian Congress of Soviets (1939). 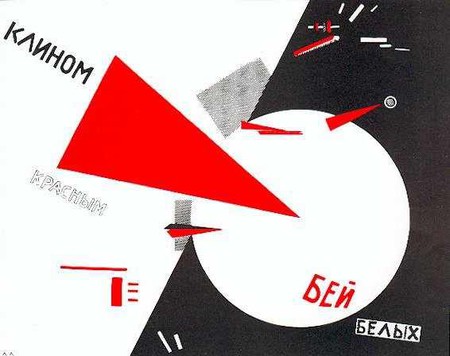 El Lissitzky, Beat the white with the Red wedge, 1919 | © WikiCommons

Lazar Markovich Lizzitsky, but more widely known as El Lizzitsky, was not only a painter during the Soviet regime but also a designer, photographer, architect and polemicist. He is a notable figure of the Russian avant-garde and created innovative propagandist works for Stalin. Influenced by Kazimir Malevich, who was his mentor, his own works went on to influence the Bauhaus and the Constructivist movement. Much of 20th-century graphic design can be linked to Lizzitsky’s innovations of dynamic compositions and use of color. He began his creative career as a book illustrator for Yiddish children’s stories, due to his Jewish origins. He became a teacher at 15, a vocation which he followed for much of his life. His artistic creations included exhibition displays and propaganda posters, most notably Beat the Whites with the Red Wedge (1919). A key element of Lizzitsky’s works was that they were created to promote social and revolutionary change. He became the Russian cultural ambassador to Weimar Germany in the 1920s. He has left behind a legacy of unique typography and design works that continue to be influential and provocative today. 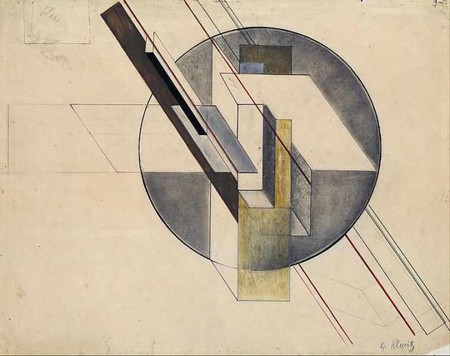 Born in Latvia, Gustav Klutsis was one of the prominent photographers during Stalin’s rise to power. He is famous for producing some of the most well-known Stalinist propaganda works in the medium of photomontage, which he often collaborated on with his wife, Valentina Kulagina. Klutsis is often associated with Constructivism and the Russian avant-garde. He began his artistic training in Riga, Latvia before being drafted into the Russian Army in 1915. He traveled to Moscow in 1917 where he studied art under Kazimir Malevich and Antoine Pevsner. Graduating from the state-run art school VKhUTEMAS, he would return here as a professor of color theory. However, despite producing art for the Soviet regime, Klutsis was arrested in Moscow as he prepared to leave for the New York World’s Fair in 1938. He was never seen again, and it is believed that he was executed.

Born in Kiev, Kazimir Malevich spent much of his formative years living in remote Ukraine and moving locations often. Isolated from culture, Malevich absorbed the traditions of rural life, which are said to have stayed with him throughout his life. Following the death of his father in 1904, he moved to Moscow where he attended the Moscow School of Painting, Sculpture and Architecture. He was a contemporary of Vladimir Tatlin, often exhibiting with him at exhibitions. A turning point in his style came from the opening of a major exhibition of works by Aristarkh Lentulov in Moscow in 1913. This is said to have opened Malevich’s mind to Cubist forms and principles, which he began to incorporate into his works. Malevich’s main contribution to art history came in 1915 when he penned his manifesto From Cubism to Suprematism. Suprematism was to become his trademark style and highly influential for generations of artists to come. Renowned Suprematist works by the artist include Black Square (1915) and White on White (1918). Although his works were initially praised by the Russian government, following the rise of Stalin, his art was deemed ‘bourgeois,’ and he was banned from creating artworks and from exhibiting.

Konstantin Yuon was a painter and designer from Moscow known for his landscape works. He studied at the Moscow School of Painting, Sculpture and Architecture and later in Serov’s studio. After his education, Yuon spent a number of years traveling around Europe, enraptured by the artistic styles and creations he saw. He was particularly taken by the Impressionists for their exploration of light and color. It is believed that he incorporated these approaches and styles into his own landscape works. However, his later works reveal a more social realist style as he included more peasants and rural figures in his paintings. He had an impressive artistic output, from set and costume designs for Diaghilev’s Paris production of Boris Godunov in 1912 to exhibiting with the World of Art. He was also a member of the Union of Russian Artists and the Association of Artists of Revolutionary Russia.

Taking to painting at the age of four, Leonid Steele became one of the leading painters of the Soviet socialist realism style. His inclusion in the World Art Exhibition at the World Fair in New York in 1939 made him a household name. While serving in Siberia, he began to paint en plein air along with Evgeny Kudriavtsev who was the then director of the State Treyakov Gallery. In 1953, he would see his own works exhibited in this gallery. He also received more recognition when his graduation painting Defend the Peace (1953) was exhibited in Leningrad’s Kazan Cathedral. It was also reproduced throughout the USSR and internationally. A member of the Union of Artists of the USSR, his paintings are recognizable for their multi-figurative compositions produced with a slightly impressionist style. He participated in 80 exhibitions over the course of his lifetime. Leonid died last year in Los Angeles, California.

Born in Vitebsk, Marc Chagall is known for his large scale commissions such as windows for the synagogue of the Hadassah University Medical Center in Jerusalem, the Paris Opéra ceiling, a window for the United Nations building in New York, and murals for the Metropolitan Opera House. Chagall studied at the Imperial Society for the Protection of the Arts in Saint Petersburg. He moved in Paris in 1910 and was encapsulated by the cubist and Fauvist styles that were popular there at the time. His works were included at the Salon des Indépendants and the Salon d’Automne in 1912. He returned to Russia in 1914, but had to remain there for some time due to the outbreak of the war. Settling in his hometown of Vitebsk, Chagall founded the Vitebsk Popular Art School and was appointed Commissar for Art in 1918. After the war, Chagall traveled around Europe and beyond. During World War 2, Chagall fled to the United States. A retrospective of his work took place in the Museum of Modern Art, New York, in 1946. 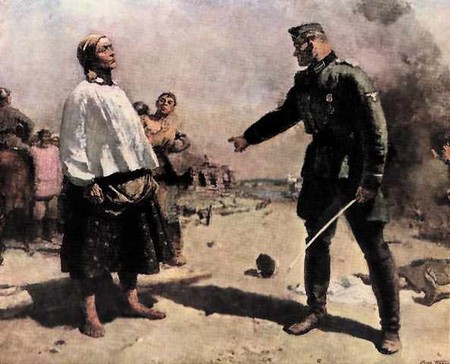 The paintings by the Moscow artist Sergey Vasilyevich Gerasimov were renowned for their fusion of Russian and other European modernist styles. A student of Konstantin Korovin, Gerasimov’s early works were mainly watercolors that were praised for their technical virtuosity. He studied at the state art school VKhUTEMAS during the 1920s and 1930s and began producing posters and other works for the Soviet government. Despite creating communist-style works, he was known to be a liberal thinker. He was also a member of Makovets groups and was once the director of the Artist’s Union of Russia; however, he was demoted in favor of Aleksandr Gerasimov, his artistic and namesake nemesis. He was reinstated as director following the death of Stalin. His most famous and masterful works come from his time spent in the city of Samarkand, many of which are exhibited today at the Tretyakov Gallery in Moscow. 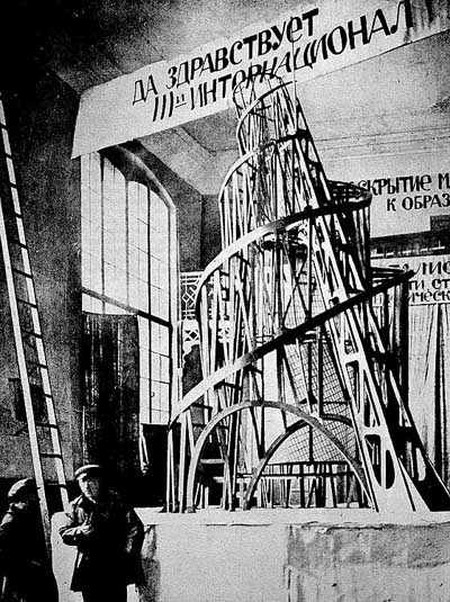 Vladimir Tatlin, The Monument to the Third International, 1919 | © WikiCommons

Perhaps one of the most renowned Soviet architects of the early 20th century, Vladimir Tatlin was a prolific figure of the Russian avant-garde. Associated with modernist and constructivist art, his famous design for The Monument to the Third International (1919) placed him on the art history map. Although it was never built, it became a symbol of Russian modernism and cutting-edge design. Influenced by Picasso’s Cubist collages and Russian Futurism, Tatlin created his own creative language, translating it into creative works of glass, metal and wood. Painting was not a concern of his. Art was to have a more practical purpose and was to represent ideal values. Tatlin’s early life was filled with travel, as he left home to work as a merchant sea cadet. He initially trained as a Russian icon painter, but following his education at the Moscow School of Painting, Sculpture, and Architecture and the Penza School of Art, Tatlin began to create his non-utilitarian sculptures that would become synonymous with his name.