10 Russian Painters You Should Know 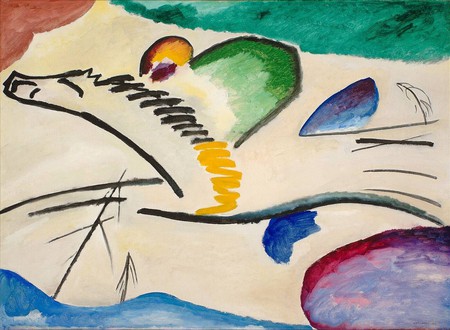 A simple search for Russian artists will bring out hundreds of results online. And although all these artists deserve special recognition for their work, there are some that can be singled out as innovators and leaders of new movements in art.

Bryullov was born into a family of artists and just like his brothers studied at the Academy of Arts, where his father was a teacher. After completing his studies, the young artist was given a bursary to travel to Europe. He especially loved Italy where he completed one of his masterpieces, The Last Day of Pompeii. The painting gained him recognition, and he returned back to Russia a hero. His personal life was not as happy. He had a brief marriage that ended in divorce after only two months. Bryullov became an outcast of high society and therefore returned to Italy where he spent the rest of his days. 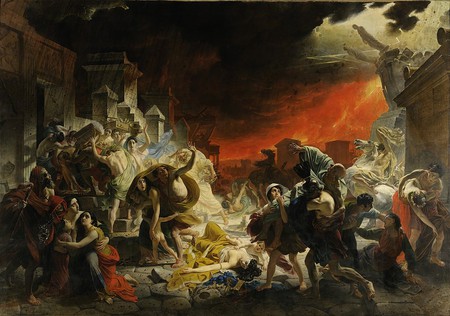 Aivazovsky’s path into art was a combination of talent and luck. He was born into a poor family that wouldn’t have been able to support an education in art. He was taken into the family of Feodosia, which allowed him to attend a proper school and then study in St Petersburg. The sea became the main object of his art. He travelled to Crimea where he spent two years living right next to the Black Sea. Among his many nautical masterpieces is The Ninth Wave, the painter’s most famous work. 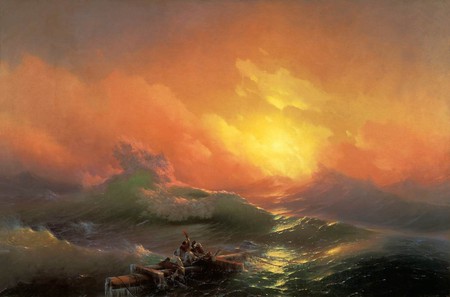 Vereshchagin began his career in the military, but soon his passion for art took over and he began studying at the Academy of Arts. After completing his education, Vereshchagin travelled to the Middle East in the midst of battles. He dedicates a lot of his work to the topic of war, completing The Apotheosis of War, his only fictional piece, with a strong anti-war message. Because of the strong message of the painting, Vereshchagin was not well received in Russia. He left the country, living in Tibet and India. He died in battle during the Russian-Japanese war. 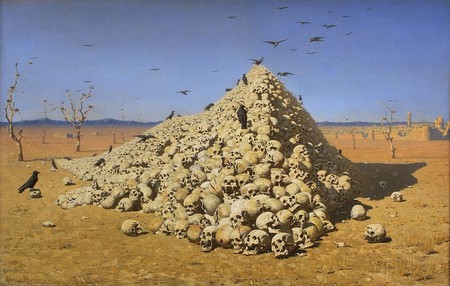 The Apotheosis of War | © Wikimedia Commons

Repin was born into a poor family of peasants, but his mother noticed the talent in the young boy. He learned the basics of painting from a local icon painter and then earned just enough money to travel to St Petersburg. Upon graduating from the Academy of Arts, his work was already receiving lots of praise. He then completed his first major work, Raising of Jairus’ Daughter. Repin completed a number of works during his lifetime, including many portraits of his contemporaries. He also received an order from the government to complete one of his largest paintings, Ceremonial Meeting of the State Council on May 7, 1901, which consisted of over 80 portraits. It was his last major work.

Despite completing studies to become a lawyer, Vrubel never in his life worked as a lawyer. He then began studying at the Academy of Art where one of his professors recommended him as an artist to help restore frescoes in a Ukranian monastery. When he moved back to Russia, Vrubel encountered financial problems. Soon after, his father died and his son was born with a health defect. The writer’s troubles are reflected in his series of paintings dedicated to demons, such as Demon Seated. Toward the end his life, he had a nervous breakdown and was hospitalised. His last painting, The Prophet, was inspired by a poem of Alexander Pushkin. His completed it as mental illness was overpowering him and as he was approaching complete blindness. 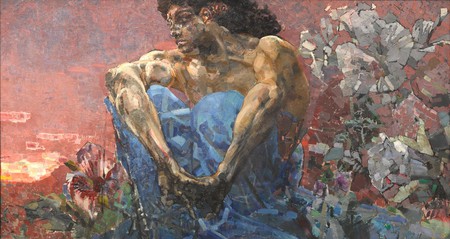 Levitan was born into the family of a rabbi who made a living by teaching languages. Their family made just enough to survive, but despite their poverty, both Isaac and his brother were sent to art school. His journey in school was not easy, and he did not graduate with a full degree. The main object of Levitan’s paintings were landscapes. His style of painting them has a special term “mood landscapes.” Many of his famous works were completed near the Volga river where the painter was travelling. 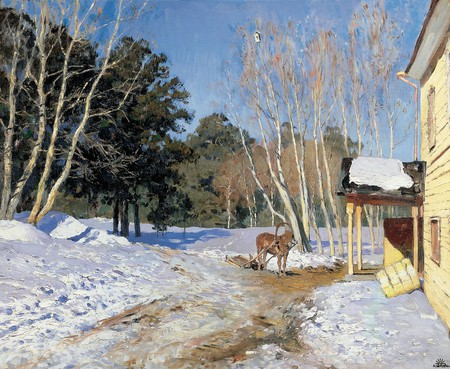 Serov was born into the family of a composer father and a pianist mother. From a young age, he showed an interest in painting and studied overseas in Germany and France. He then moved to Moscow to complete his education at the Academy of Arts. At a young age, he completed one of his major works Girl with Peaches. The bulk of Serov’s paintings consist of portraits. He painted many well-known figures of the time, among them members of the royal family. At the end of his life, he resigned from his position at the St Petersburg Academy of Arts as a gesture of protest against the Russian Revolution. His later works explore new themes, mainly taken from classical mythology. 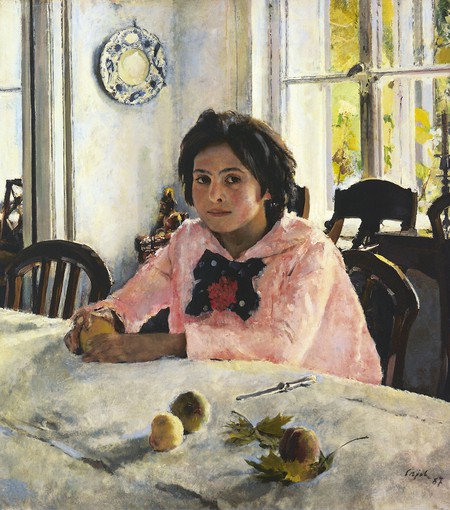 Kandinsky’s path into art was dissimilar to others – he only turned to painting at the late age of 30. His inspiration came from visiting an exhibition of impressionist painting that was on tour in Moscow. He then moved to Germany and studied art there and created an art circle called Falanga where he started teaching. Kandinsky was part of the expressionism and abstract art movement that simplifies shapes and forms, making the object independent from visual references. An example of such works are Kandinsky’s Compositions that he completed over the course of 30 years. 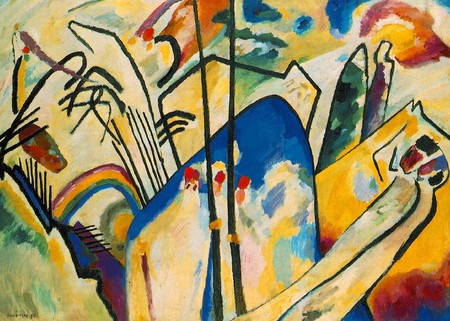 Kustodiev grew up in the Russian village with his widowed mother and three siblings. Even as a young boy, he knew he wanted to become a painter, so Kustodiev entered the Academy of Arts, where he studied under Ilya Repin. He received a grant to travel to Europe with his young family and then settled near the Volga river setting up a workshop called Terem. His quiet family life did not last very long. Kustodiev had tuberculosis and had to receive treatment overseas. The illness progressed, and the painter became paralysed from the waist down. He then became chained to his bed but painted some of the most joyous and colourful paintings in his career, The Beauty and The Merchant’s Wife. The illness took his life at the age of 49. 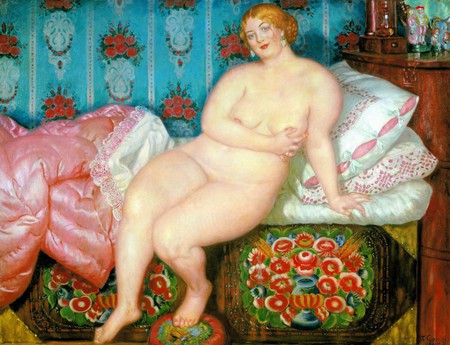 Petrov-Vodkin was born into a family of shoemakers and became one himself. He didn’t intend to become an artist, but getting acquainted with writing sparked an interest in the young man. He travelled to St Petersburg to begin his proper studies. Many of his works were not welcomed by critics; they were labelled as blasphemous and too erotic. It was after his graduation that he completed one of his iconic works, Bathing of a Red Horse, seen as an omen of the upcoming changes in society. Toward the end of his life, Petrov-Vodkin was sick and turned to literature rather than painting. His work was still in demand in Soviet Russia, and he was elected the first president of the Leningrad Union of Artists. 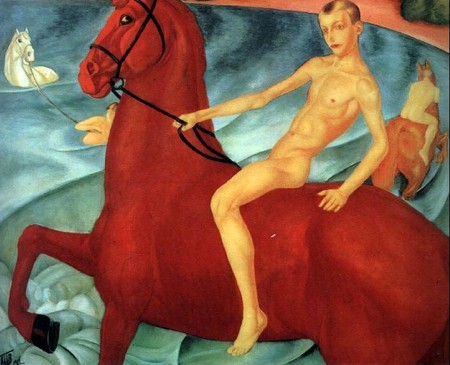 Bathing of a Red Horse | © Wikimedia Commons
Give us feedback