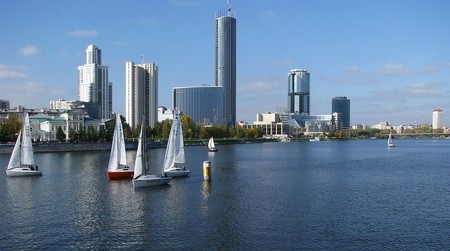 Known as Sverdlovsk during the Soviet era, Yekaterinburg is located at the crossroads of Europe and Asia. Russia’s third city might be a little more subdued than Moscow but is has plenty of culture and urban romanticism to offer. Here are 10 reasons you should buy your ticket to Yekaterinburg right now.

According to the Institute of Clod Nicole Ledu, Yekaterinburg’s planning and architectural development puts it among the world’s “12 ideal cities”. The unofficial capital of the Urals seems to have it all: over 600 historical and cultural monuments, 18th- and 19th century stone and wooden buildings, iconic pieces of constructivist architecture and the world’s most Northern skyscrapers. Admire the intricate ornaments of the Sevastyanov house, marvel at the fascinating geometry of the Chekist Town and look at the city from the observation deck, located at the 198 meter ( 649 ft) high Vysotsky, the tallest building in the Ural-Siberian and Central Asian Regions.

No matter how odd it may seem, the Beatles memorial in the centre of Yekaterinburg is probably the most symbolic place in the city: the Liverpool band (banned in the USSR) inspired the country’s most influential rock-club. Today Yekaterinburg’s music legacy is as powerful as ever: the aforementioned rock-club produced the legendary bands you can still find on teenagers’ playlists: Nautilus Pompilius, Chaif, Agatha Christie and Smyslovye Gallyutsinatsii, there are younger culty bands like Kurara and Sansara along with emerging players like Sage and Daniel Shake. Visit one of the city’s music festivals like Ural Music Night, stop by EverJazz club for an evening of high quality entertainment or dance the night away at the hip Dom Pechati.

Russia’s best city for business and investment, Yekaterinburg is often referred to as the unofficial capital of the Urals – the region, where Russia’s largest metallurgical enterprises are concentrated. Metal produced by Yekaterinburg plants was used to build some of the world’s most illustrious landmarks: New York’s Statue of Liberty, the Eiffel Tower in Paris and the Houses of Parliament in London. You can learn about the city’s industrial past (and present as well) on one of many city tours and hear about Yekaterinburg’s first metallurgical plant, built in 1704, and see the legendary Uralmash with your own eyes.

Yekaterinburg is home to 60 museums and art galleries, which host some sensational rarities: like the Kasli iron cast pavilion at the Museum of Fine Arts – the opulently decorated pavilion won the Grand Prix at the Paris Expo 1900. You can explore the literary legacy of the region at the Municipal Museum of Ural Writers, which comprises a theater and three memorial museums, dedicated to life and work of famous 19th and 20th century Russian writers born in the Urals: Dmitry Mamin-Sibiryak, Fyodor Reshetnikov, and Pavel Bazhov. You can also see the region’s wealth at the Ural Mineralogy Museum, holding a unique collection of minerals, and the Museum of Jewelry Art History.

A bustling business centre, Yekaterinburg is also known for its thriving art scene. From iconic figures like the late Old Man Bukashkin to award-winning visionaries like the artist group Where Dogs Run, to provocative street artists like Slava PTRK and Udmurt – the city’s contribution to Russia’s contemporary art is powerful. In attempt to rethink its industrial legacy, Yekaterinburg plays host to the world’s first industrial biennial – a grand-scale art event, which will have its fourth installment in the fall of 2017. For lovers of contemporary art, there are many exciting venues to choose from, like National Center for Contemporary art, NCCA, Yekaterinburg Modern Art Gallery and street art gallery Sweater among others.

Home to one of the oldest theaters in Russia, Yekaterinburg boasts around 40 active professional theatres, many of which have gained not only local, but international success. Opened in 1912 the State Academical Opera and Ballet Theater grew to become one of the most celebrated theaters in Russia, where opera legends like Ivan Kozlovsky, Sergei Lemeshev, Irina Arkhipova. To this day the theatre hosts exceptional performances and music festivals, featuring Russian and international singers.The Academic Musical Comedy Theater is yet another legendary place in Yekaterinburg and on the Ural. Founded in 1933, it’s been known for its innovative approach ever since and is still considered to be one of the most inspirational theatres in Russia. The award-winning Kolyada Theatre is one of Russia’s most internationally-acclaimed modern theatres. Among other theaters you should visit are the Drama Theater, the Youth’s Theater, the Puppet Show, and the State Philharmonic Theatre.

Yekaterinburg is where the world’s oldest wooden sculpture was discovered. The Big Shigir Idol is 9,500 year-old, which makes it older than the pyramids of Egypt. Radiocarbon analysis showed that stone tools from the Mesolithic era were used to make the idol. The territory of modern Yekaterinburg was mentioned in the writings of Aeschylus, Plato and Herodotus as “an incredibly wealthy land” inhabited by magical creatures. Founded in 1723 to propel the metal industry forward, this Ural city witnessed some history-changing events. Execution site of the last Russian monarch and birthplace of Boris Yeltsin, the first Russia’s President, Yekaterinburg has enough historic places to keep you busy for days. The Ganina Yama where bodies of the executed royal family were disposed, or the Church on the Blood, located at the site of killing, or Yeltsin Center, an innovative museum of modern Russian history.

A natural border between Europe and Asia, the Ural Mountains are also an unlimited source of outdoor fun. From сountry skiing, horseback riding, paragliding, hiking trails to canoeing and kayaking – the list goes on and on. You don’t even have to leave Yekaterinburg to see the Ural nature at its finest. The beautiful Shartash lake and mysterious Kamennye palatki (stone tents) are the perfect place for an afternoon stroll.

First opened in 1991, Yekaterinburg Metro was considered the shortest in the world and even got a mention in the Guinness Book of Records. Now it has several stations and the ride from the first to the last will take you only 19 minutes, but be sure to stop and take a closer look at each of them – they are all unique and exceptionally beautiful.

Once rich in gemstones and minerals, the Ural Mountains, and Yekaterinburg as the region’s main city, have become a center for jewelry trade, known for brilliant craftsmen, carving masterpieces out of gemstones. You can still hear some beautiful legends, the Mistress of Copper Mountain being the most popular and visit many very real shops, selling locally made jewellery.