10 Most Unusual Statues in Russia 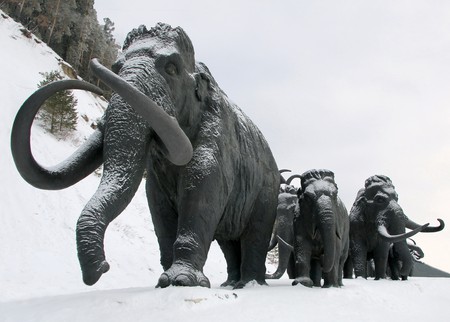 Russia is a country with a plentiful array of statues and monuments celebrating achievements across the arts, national and military service and cultural milestones. It also has plenty of statues that pay their respects to more unusual achievements and make grim social commentaries. From thankless jobs, to healthy bowels and condiments, here is our pick of the most unusual statues Russia has ever erected.

If you wander down to the Fontanka River embankment you might be able to see Chizhik-Pizhik, the tiny bronze bird perched midway down the embankment ledge – that is if nobody has taken it. Only 11 centimetres high and weighing around five kilograms, it is one of the smallest statues in St. Petersburg and easy to steal. Residents throw coins at it, believing it brings good luck. It was designed in 1994 by Georgian artist and playwright Revaz Gabriadze.

Where would we be without computers and what good is a computer without a keyboard? On the Iset River embankment a 30:1 scale tribute to technology lies flush to the ground. Created in 2005, each key weighs over 80 kilograms and the spacebar weighs over 450 kilograms. One of the city’s bigger tourist attractions, it is believed if you want to reboot your life press Ctrl, Alt, Del or if you type in a wish and then press enter, it will come true.

Monument to the Heater, Samara

A cat relaxes lazily above a radiator, warmed by heat the it emits, it embodies the cosiness and comfort the radiator has afforded Russians during their long icy winters. Designed by local artist Nikolay Kuklev in 2005, the statue recognises Russia’s role in the life changing invention. In 1882 inventor and entrepreneur, Franz San Galli of St.Petersburg is credited as one of the inventors of the radiator. 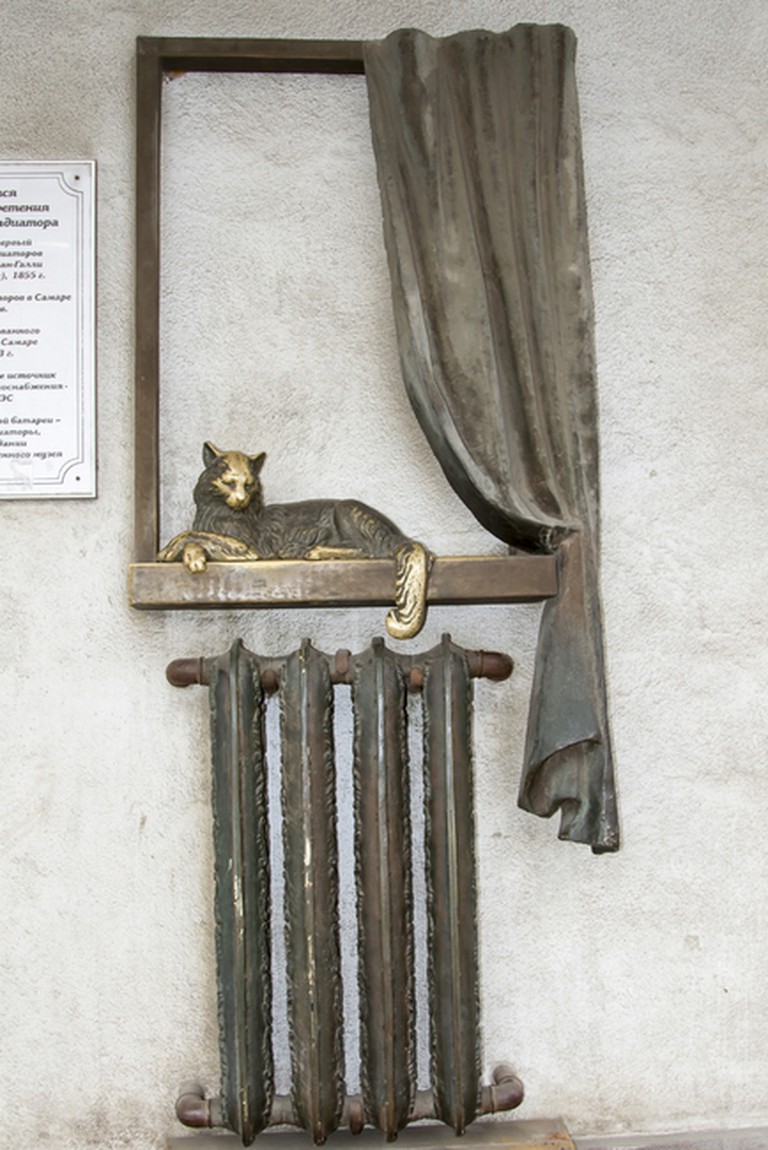 Children are the Victims of Adult Vices, Moscow

The title says it all, really. It speaks a depressing and sombre truth that initially begs the question why immortalise the sentiment? Some argue it is there to remind us what our failures as individuals and as societies cost us. Artist Michail Chemiakin created the statue in 2001 and stated that it was ‘a symbol and a call to fight for the salvation of present and future generations’. Thirteen figures, representing thirteen vices – alcoholism, child labour, indifference, drug addiction, prostitution, sadism, ignorance, pseudoscience, war, poverty, theft, capital punishment, and the advocation of violence – all lurk around two children playing naively, oblivious to the dangers surrounding them. 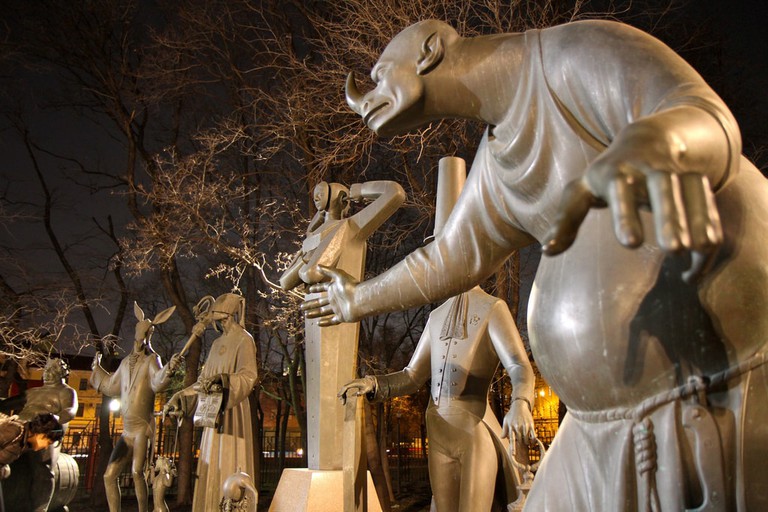 In July of 2016, an anonymous person painted the large granite ball that decorates Yekaterinburg’s embankment so it resembled a Poke Ball. While it has since been washed clean, Mayor Yevgeny Roizman was happy to leave it there for a few weeks so that Pokemon fans could appreciate it, removing it in time for the city’s anniversary festivities on 18 August. This was the second time the ball has had a makeover. In 2013 it was painted so that it looked like a character from angry birds.

Ekaterinburg is ready to catch the most rare Pokemon! The first monument to the #PokemonGo game in Russian industrial city near Urals mountains. #ekaterinburg #urals #russia

Turns out this isn’t the only statue of a pickled cucumber there is. Ukraine has got one, Austria has got one, even Belarus has one. Monuments to this vinegary, crunchy treat are everywhere. Everybody loves a pickled cucumber. Towns in Estonia, Russia, America and the Ukraine are all considered cucumber capitals of the world, and each with their own pickling recipe. Lukhovitsy is Russia’s cucumber capital. And to prove it, the town erected a massive one in 2007. 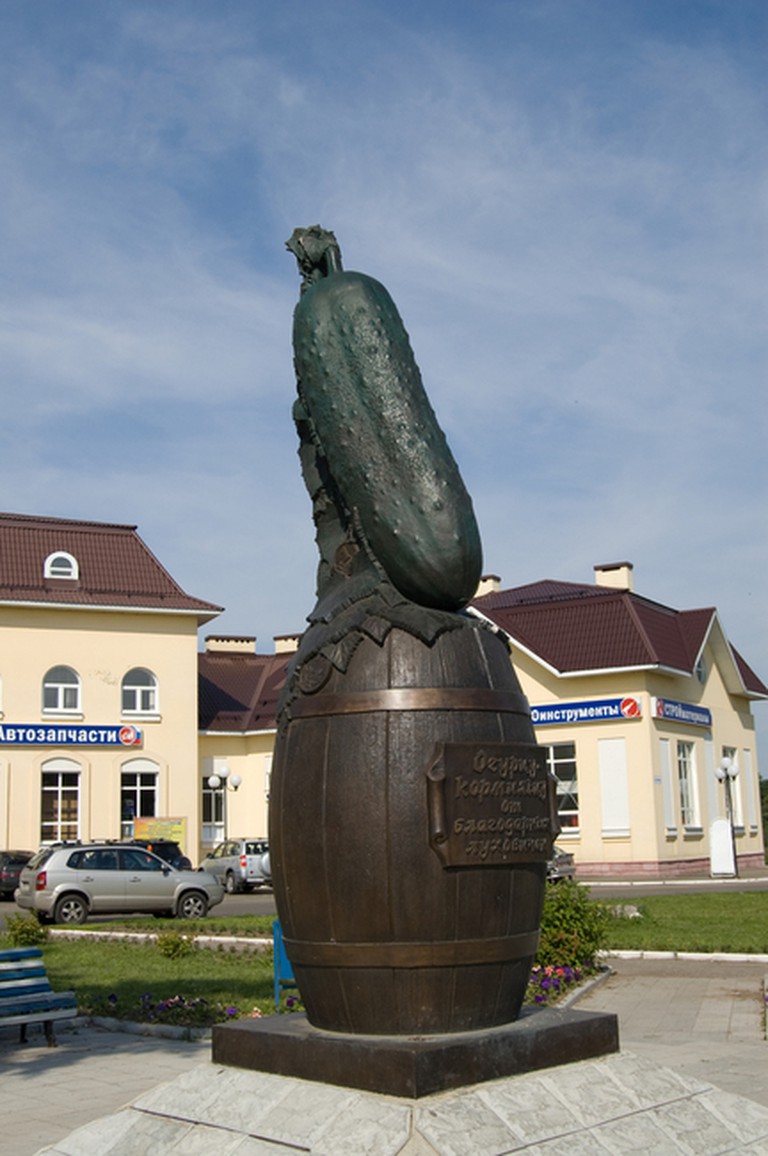 A thankless job just got eternally thanked by sculptors S.N. Noryshev and I.A. Vakhotov. Stepan, the stone plumber emerging from a manhole and seemingly satisfied with a hard day’s work, has been a fixture in Omsk city centre since 1998. The jovial workman is popular with tourists and locals alike, locals believing that to avoid plumbing problems at home, just give Stepan a hug. 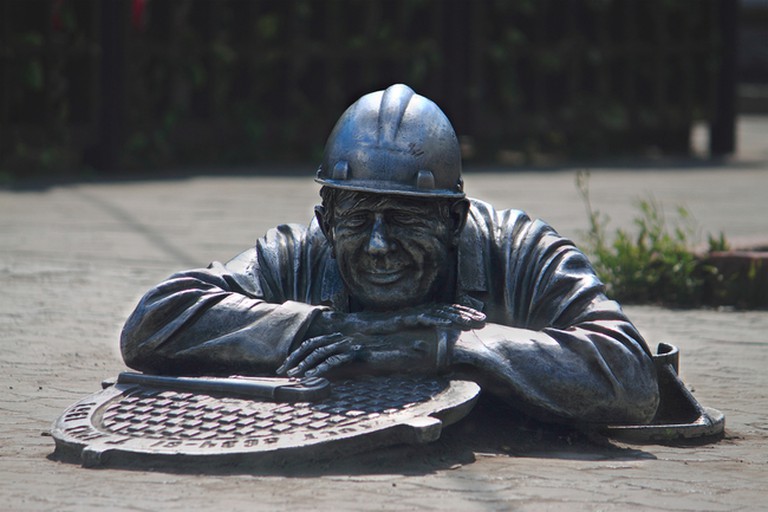 Spa
Facebook
Email
Twitter
Pinterest
Copy link
Share
Map View
No one should ever take a healthy bowel for granted, and it appears that the town of Inozemtsevo doesn’t. The three bronze cherubs that buoy up the apparatus are Mashuk Aqua-Therm Spa’s mascots and a symbol of the region. Enemas are routinely administered as part of health treatments using the mineral rich waters of the Caucasus Mountains. Constructed in 2008, the statue was created by a local artist named Svetlana Avakova. It was unveiled to the public along with a banner that stated ‘ Let’s beat constipation and sloppiness with enemas’, a reference to the Soviet comedy The Twelve Chairs.
Open In Google Maps
Inozemtsevo, Russia
Give us feedback

Monument to the Family, Saransk

Throughout Russia, the government erected monuments promoting the nuclear family set-up and traditional family values as the ideal domestic arrangement. They depict healthy and happy fathers and mothers – sometimes pregnant –and their children enjoying themselves on an outing through the city or relaxing in centre squares. Despite echoing Soviet era propaganda art, it is believed these statues have been constructed late 20th century, although dates are unknown. Probably unintentionally, they spark debate as to whether or not the promotion of traditional family values comes at the expense of alternative domestic setups. 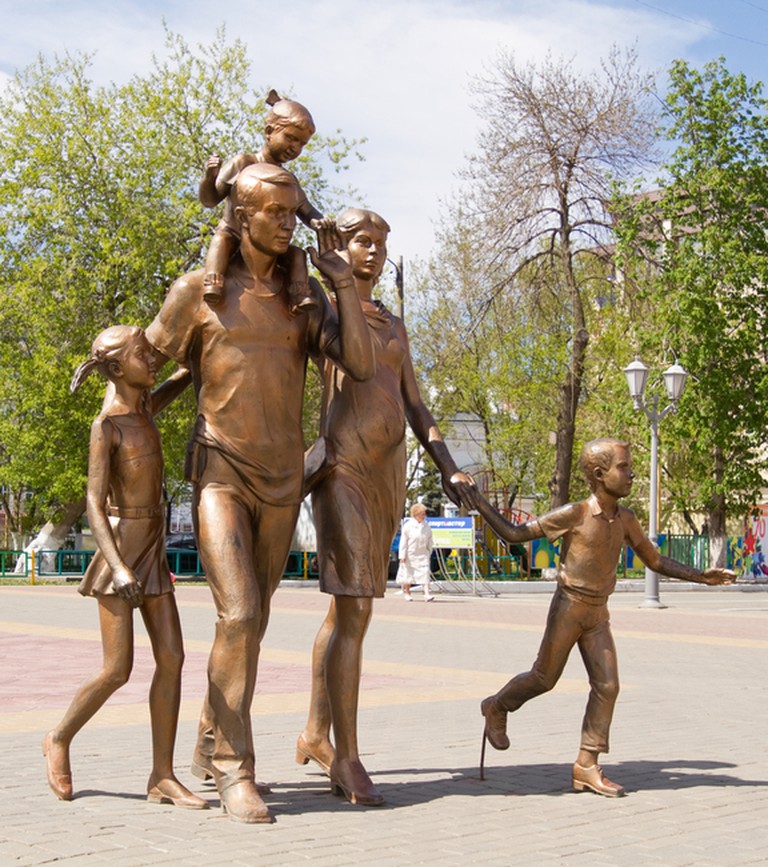 The Monument to Lab Rats Used for DNA Research, Novosibirsk

University
Facebook
Email
Twitter
Pinterest
Copy link
Share
Map View
Found in front of the Institute of Cytology and Genetics, a research facility of the Novosibirsk State University, a sweet, cartoon-like statue commemorates the sacrifice rats make for the betterment of human kind. Specifically, in genetic research undertaken as part of developing new drugs and curing diseases. The institute hopes to create more tributes to other laboratory animals, with plaques detailing how each animal has helped humanity.
Open In Google Maps
10/2 Prospekt Akademika Lavrent'yeva, Novosibirsk, Novosibirskaya oblast', 630090, Russia
Give us feedback
Give us feedback