The Most Delicious Romanian Desserts 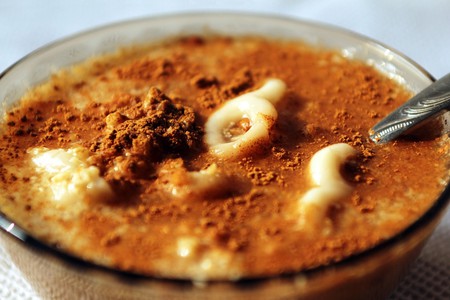 Romania is not only renowned for its astounding scenery, centuries-old traditions and warm people, but also for the mouthwatering cuisine. Try visiting a Romanian friend and you will never leave with an empty belly. When it comes to food, Romanians take it seriously: it has to be delicious, aplenty, and finished by the end of the meal. But the best is kept for the very end; toothsome desserts that, as full as you may be, you just can’t refuse. Here are some Romanian desserts that you must try.

Ask a Romanian to recommend you a dessert and they will surely tell you about papanași. Made from fried dough and sweet Romanian cheese, they have the shape of a doughnut. Garnished with fruit jam and sour cream, each bite will melt in your mouth. Based on a recipe originating from Moldova, the papanași have become popular all over the country and almost all restaurants serve them. When in Romania, you just can’t miss this mouth-watering dessert. 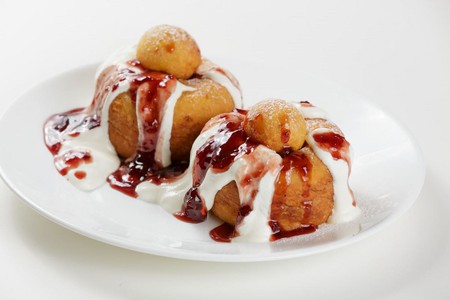 Mostly prepared in the Banat and Transylvania regions, vargabéles is a Hungarian dessert that kind that reminds you of your mom or grandma’s home-baked cakes. This baked-noodle pudding with sweet cheese is ideal for those who like light desserts. Flavored with raisins, vanilla and lemon zest, Vargabéles is a toothsome pudding that you can also make at home. Next time you visit Romania, ask for it in the traditional restaurants.

Nowadays a very appreciated sweet, Kürtőskalács is a cone-shaped roasted pastry originating from the Hungarian-speaking regions of Romania, predominantly in eastern Transylvania. Made from a baked, sweet dough rolled in sugar, Kürtőskalács can be garnished with walnut, cinnamon, cocoa, and other similar flavors. While this dessert isn’t served in local restaurants, you can find it in small, specialist bakeries that usually make only the Kürtőskalács. 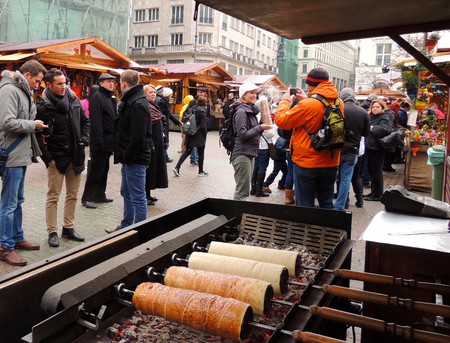 Brânzoaică is a delicious dessert originating from Moldova region, made of baked dough filled with sweet cheese. While this is not the only Romanian dessert with sweet-cheese filling, an ingredient that Romanians absolutely love, it is surely one of the most delicious pastries you can taste in the country. To prepare it, there is a special technique of folding the dough: first, you create a square, then you fill it with some cheese and finally, you enclose the edges one over another. For a fully-flavored brânzoaică, lemon zest is added to the dough, while the cheese is seasoned with vanilla and raisins.

Prepared all over Romania, Plăcintă cu mere, or sweet apple pie is made using an old recipe, and for many Romanians is the dessert of their childhood. A delicious mix of apple, sugar, and cinnamon that fills several layers of sweet dough flavored with vanilla sugar. Between two dough layers, a layer of grated apple is added and then baked in the oven. The result is a soft, absolutely delicious cake.

Typically eaten for Easter, pască is a traditional dessert of sweet bread with a cheese and raisins filling. Fluffy, soft and light, pască is never missing from a traditional table during Paschal (Easter/Passover) celebrations. The sweet cheese, the raisins, the orange and orange zest, together with the vanilla and the rum create a fabulous aroma giving it a delectable taste. The cake’s round shape is made from braided pieces of dough and it is sometimes decorated with a cross made of dough in the center.

Always prepared on March 9, when the feast of the Forty Martyrs of Sebaste is celebrated by Christians, mucenici is a dessert with a certain symbolism. The 40 martyrs were a group of Roman soldiers sentenced to death for not giving up their Christian religion. Today, the cake has the shape of the number eight, believed to represent the number of days that the soldiers spent in prison. Popular mainly in Moldova, the mucenici can be either baked as sweet bread topped with walnuts, or boiled and prepared with a syrup containing ground walnuts. Both are perfect for a sweet breakfast or for a lighter dessert.

Frigănele is the sweet version of Pâine în ou, and is usually eaten for breakfast. Very easy to make, Frigănele is a piece of bread dipped in beaten egg mixed with milk, then fried, and served with marmalade. As easy as it is to be prepared, this dessert is incredibly savoury.