The Coolest Neighbourhoods in Bucharest 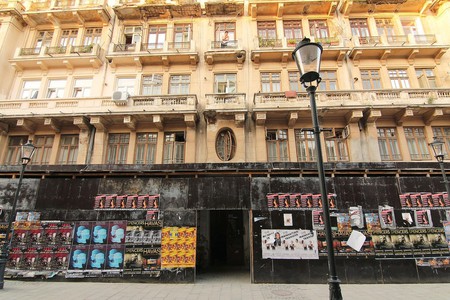 In a continuous transformation since the fall of Communism 20 years ago, Bucharest is cooler than yesterday and will be even cooler tomorrow. With an unusual mix of architectural masterpieces from the interwar period through to the Art Deco era, the city has some stand-out neighbourhoods. Here’s our pick of the coolest spots in town.

Divided by the large Unirii Boulevard leading to the Palace of Parliament, and largely composed of concrete blocks of flats and imposing administrative edifices with marble façades, this neighbourhood was shaped by the grandiose vision of Romania’s former dictator Nicolae Ceaușescu. Fresh from his visit to North Korea, where he was inspired by Juche ideology and architecture, he displaced 40,000 people on a day’s notice and set to build what was meant to be the country’s administrative centre in a move later dubbed ‘Ceaușima‘ (a portmanteau of Hiroshima and Ceaușescu). Today, the lively terraces and shops that popped up in recent years bring a welcome contrast to the stern appearance of the neighbourhood. Among them, Hanul Berarilor, serving delicious traditional Romanian food in an 1914 Neo-Romanian villa, survived only because it served as a party headquarters.

This historic neighbourhood is Bucharest’s oldest, dating from 1459, when local ruler Vlad Dracul III established his court Curtea Veche here, the remains of which can be visited today. Named after Saxon merchants who came from Leipzig in Germany to trade with the locals, the neighbourhood is today best known as The Old Centre. The epicentre of Bucharest nightlife, its narrow winding streets are lined with cafés, bars and terraces, restaurants and clubs housed in fully renovated houses with beautifully adorned façades. Don’t miss Pura Vida Sky Bar and Nomad Sky Bar for stunning views over the city.

This up-and-coming neighbourhood is full of gourmet shops, wine boutiques, and confectionery shops, and boasts some of the best restaurants in the city. The architecture is a mix of old villas with a front garden – including the occasional architectural treasure – and four-storey blocks of flats. This neighbourhood is one of Bucharest’s greenest, and has many parks and green spaces. Don’t miss Gradina Floreasca, hosting live concerts all summer long, Yuki Japanese Home Dining and Thai cuisine heaven Tuk Tuk, among others.

One of the poshest hoods in the Romanian capital, Dorobanți is the place to go and wander while admiring some of the biggest and most impressive villas in the capital. Home to many embassy buildings, it is also seen as the meeting place of Bucharest’s nouveau riche. Make sure to stop for a brunch at Frudisiac, a Scandinavian-style café, or grab a piece of vegan heaven at rawdia, before exploring the area.

An exclusive neighbourhood, Primăverii was made fashionable by the Communist nomenklatura, who were provided with residences in the newly-built neighbourhood. Today it is still home to the most expensive properties in the Romanian capital, and is the only neighbourhood where five Romanian former presidents still live. The highlight, Primăverii Palace and Nicolae Ceaușescu’s former residence, is now a must-visit museum.

One of Bucharest’s most charming neighbourhoods, Cotroceni is primarily a residential area with 19th-century villas dotting streets lines with old linden trees. One of the most sought-after neighbourhoods, it hosts the city’s Botanical Garden and the official residence of the Romanian president, Palatul Cotroceni. The Cotroceni Museum, hosted in one of its wings, has an impressive collection of paintings and books on display, as well as decorative objects.

A workers’ neighbourhood, this area was developed in the 1960s around the large park of the same name. Due to the fact that both the park and the neighbourhood were built with help from the city’s young people and even students, a common practice during Communism, they both bear the name Tineretului, meaning ‘youth’. Today it is one of the liveliest and most popular residential areas of the city due to its proximity to the centre.

Rahova neighbourhood speaks of Bucharest’s past as a melting pot for Romanians coming from all regions of the country in search of a better life. Still with a slightly shabby air, due to its crumbling but beautifully adorned façades, it is perhaps the best place to experience the contrast between Bucharest’s appearance before and after the onset of the communist regime. Check out the fully renovated red brick building of the former Bucharest Stock Exchange, now the cultural hub The Ark, and stop by the flower market for some fragrant bargains.