The Best Things to See and Do in Oradea 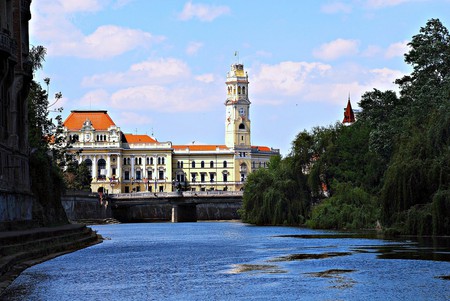 An important historic and cultural centre, Oradea lies in Western Romania, on the banks of the Crișul Repede River, which cuts it almost in half. For centuries one of the most important urban centres in the region, it is seen as a gateway to Western Europe. Although not a busy tourist city, Oradea boasts plenty of natural, cultural and historic attractions that make it a great destination.

Oradea is home to a 12th-century pentagon-shaped citadel with an illustrious past. Built by King Ladislau I of Hungary as a fortified Catholic abbey, it was later transformed into a Renaissance style citadel and promoted to the status of headquarters of the Roman-Catholic Diocese of Oradea. Once surrounded by a very deep 120-foot-wide moat, filled with water from the Criș River, it is today the best preserved citadel in Europe.

Built in late Austrian Baroque style, Oradea’s Catholic Episcopal Palace was founded in the 18th century by the Baron Bishop Adam Patačić. Built based upon plans by Austrian architect Franz Anton Hillebrand, it features 365 exterior windows, representing the days of the year, and 120 rooms spread over three floors. Inspired by the Belvedere Palace in Vienna, it is today one of the city’s most beloved landmarks.

One of the architectonic jewels of the city, the Darvas-La Roche house was built between 1909 and 1912 by brothers László and József Vágó in Art Nouveau secession style. The highlights include the facade, decorated with green blue Zsolnay ceramic buttons in several styles, the richly adorned balcony, the bright coloured stained glass with natural motifs and unique iron decorations.

Church with the Moon

Built at the end of the 18th century, this Romanian Orthodox church, famous due to a mechanism built by Viennese master George Rueppe, shows the phases of the moon. Unique in Europe, the mechanism, which operates a sphere with a diameter of one meter painted in black and gold, is fitted on the church’s tower. The metal moon follows the moon’s rotation around the sun and shows the onlookers the exact phase Earth’s moon is in.

Pârâul Peţa Natural Reservation is home to a precious type of water lily, native to the Peţa River. Nymphaea lotus f. thermals, which only grows on the surface of the thermal waters that reach 30 degrees Celsius, is believed to have survived here since prior to the Ice Age. The flower, which blooms at night and is slightly fragrant, is only grown in two other locations – at the Kew Gardens and the botanical gardens of Bonn university.

Thanks to its thermal waters, Băile Felix is one of the best-known spa resorts in the country. According to some historians, the hot spring were discovered around 1,000 A.D., while some say they were only used around 1,700. What is certain is that they were first exploited in the 18th century by a monk from Klosterbruck monastery in Moravia, who was also an administrator of the nearly Sânmartin monastery. With water temperatures ranging from 20 to 49 degrees Celsius, they are used when treating a host of ailments, so while in Oradea, give these natural remedies a go.

Another attraction centred on the beautiful flowers that grow in this area is the pink lotus lake. Located 8 kilometres away from Oradea, the lake is covered in hundreds of Nelumbo nucifera, or Indian lotus flowers, and receives many visitors.