The Best Festivals in Cluj-Napoca 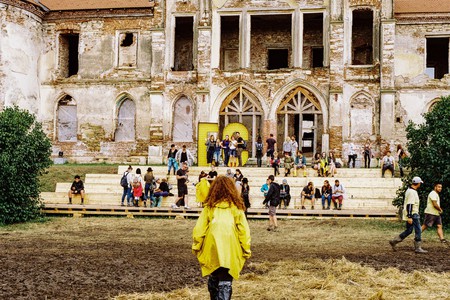 Cluj-Napoca is Romania’s festival destination par excellence. Home to three of the biggest festivals in the country and even in Europe, namely Untold, Electric Castle, and TIFF, Cluj is getting ahead of the capital Bucharest, and drawing crowds from all over the country and beyond, during the spring season and especially at the height of summer.

Held in the capital of Transylvania since 2002, the Transylvania International Film Festival, or TIFF, as everyone knows it, has grown into the best-known and most popular film festival in Romania and the region. A launchpad for Romanian films, many fresh out of their international premiere on the Croisette, it is one of the first major events on the cultural calendar. Held in over 20 venues over the city, including unconventional spaces, every spring it takes over the city, attracting over 100,000 attendees. The first Romanian festival to include an international feature film competition, it was featured by Indiewire among the world’s best 50 festivals.

A huge success ever since its first edition in 2015, Untold, held in August, is now the largest annual electronic music festival in the country. Its main stage, at Cluj Arena, is the place where many big names such as Armin van Buuren, Tiësto, Afrojack, or Steve Aoki entertain the crowds for hours, sometimes until sunrise, giving birth to legendary parties that many remember for years. Since 2016, the festival has also been an international tourism ambassador for Transylvania and Romania. That is why festival goers can visit for free or at a discounted rate many spectacular landmarks such as Bran Castle, Corvin Castle, Turda Salt Mine, and even the Merry Cemetery.

Close your eyes and get back to this! #UNTOLD #Cluj #Romania #musicfestival #goodtimes

Electric Castle is yet another Cluj product that has shot up among the biggest and best musical festivals in Europe. Taking place in July, it is held on the premises of Bánffy Castle, and seamlessly combines genres such as electronic music, rock, hip hop, indie, and more. Year by year, it has grown into a festival that offers, along with great acts, more experiences that integrate art, tech, and sports. So, as a festival goer, it is not unusual to party till dawn, take a nap, have breakfast, and stretch on a yoga mat in the shade, before starting it all over again.

Jazz in the Park

Jazz in the Park is yet another music festival that attracts a loyal following. Held in the Central Park of the city, it is a well-loved event by locals, who flock to the park to enjoy long evenings alongside their families and friends. Although as the festival grew, more venues were added to the list, the original location remains the main one and offers plenty of other attractions, too: art exhibitions, a kids’ playground, reading spaces, and crafts and book fairs.

If you’re looking for a laugh, visit the city in autumn and if you happen upon The Comedy Cluj International Festival, you’re at the right place – it’s the biggest festival in Europe dedicated exclusively to comedies. A recent addition, the Comedy Exotic section, is dedicated to exploring the sense of humor of people from places such as North Korea, Kazakhstan, or Paraguay, something with which the local crowds are not familiar.