The 12 Greatest Romanian Films of All Time 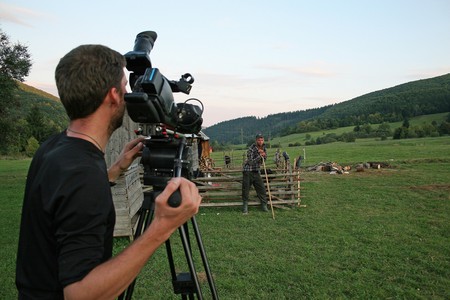 Nothing like Hollywood movies, neither fantastic nor with an expected ending, the Romanian movies tell fascinating stories. Whether portraying the life of a historical character, controversial personality or fine analysis of society’s morals, these films are authentic, surprising and revealing. The mix of action with emotions and real individuals in daily life situations is captivating. We’ve prepared a list of the most remarkable Romanian films, masterpieces that should not be missed.

If I Want to Whistle, I Whistle

Winner of several national and international awards, including the Silver Berlin Bear and the Best Romanian Feature Film award at Transilvania International Film Festival, the If I Want to Whistle, I Whistle drama directed by Florin Șerban tells the story of Silviu, imprisoned for robbery. His last days in prison come with two events that change his life: his mother, back from Italy after many years, wants to take his little brother with her, and Ana, a beautiful student working in the penitentiary, makes him fall in love. In his despair, Silviu acts unexpectedly. A marvellous film mixing anguish, love and youth.

When an ordinary teacher falls in love with a young woman, the wish for a better life and more money to satisfy his mistresses’ whims pushes Ovidiu towards a double life, teacher by day and beggar by night. An extraordinary film written and directed by Nae Caranfil, Filantropica features remarkable actors Mircea Diaconu, Gheorghe Dinică and Mara Nicolescu. This bittersweet comedy satirizes the Romanian society in its transition period, a society with reversed values, where the corrupt ones have the power.

A story about love and choices, Tuesday, After Christmas tells the tale of Paul Hanganu, a man between two lives: one with his wife, who he spent his last years with, and another with Raluca, with whom he shares a passionate affair. A Radu Muntean movie about relationships and love at its different stages. The great actor’s performances, the flowing conversations and the intense scenes make the film a fantastic piece and one of the best Romanian movies.

A shattering drama directed by Cristian Mungiu that won the Best Screenplay Award at Cannes Film Festival, Beyond the Hills is a Romanian cinema masterpiece. Lovers since they were young, Alina and Voichița are separated by Alina’s departure in Germany, wishing to escape poverty. But love brings her back to Romania, aiming to take Voichița with her. Not only that, she finds her girlfriend in a convent, bound to live with God. Based on a true story, the movie speaks about love, choices, beliefs, all melted in a fascinating tale that takes the viewer on an emotional rollercoaster.

Mixing comedy and drama, Police, Adjective is a Corneliu Porumboiu movie about moral sense. In the post-communist society of Romania, law is imposed without reasoning. However, Cristi, a policeman, develops a morality that doesn’t align with the rigid system. While following Alex, a teenager suspected of buying and selling drugs at school, Cristi tries to pass the events through his own critical filter. When his reasoning is against what he must do, he finds himself in a situation where obeying the law means putting his conscience to one side. A Kafkaesque movie that masterfully showcases the absurdity of the system and of life itself.

Michael the Brave is a historical masterpiece directed by Sergiu Nicolaescu, depicting the rule of one of the most famous personalities in Romanian history. The film captures the reign and the battles carried out by Michael the Brave, the prince who united for the first time, in 1600, the three provinces that form today’s Romania: Wallachia, Transylvania and Moldavia. A movie set in the 70s that combines political intrigue with fantastic battle scenes, filmed without any computer effects, and outstanding Romanian actors like Amza Pelea, Florin Piersic and Nicolaescu himself.

The Autobiography of Nicolae Ceausescu

The Rest is Silence

A film about the movie-making of the first Romanian screenplay in 1911, showcasing the Independence War against the Turks, fought in 1877. Another Nae Caranfil masterwork, winner of several Gopo Awards, The Rest is Silence is about passionate people that don’t give up on their ideas, a praise to movie-makers, sprinkled with humour and tragedy. The film also captures the ambience of the 20th-century, of Romania’s Belle Epoque, a time when Bucharest used to be called ‘The Little Paris’ due to its charming atmosphere.

With a plot situated in 19th–century Wallachia, Aferim recreates the period’s ambience and tackles gypsy slavery, a lesser known part of Romanian history. Constandin, a local policeman, is hired by a noble to find Carfin, a gypsy slave that escaped the boyar’s estate, after having an affair with his wife. The movie’s title directed by Radu Jude is the Turkish word for ‘Bravo!’, a replica that is often used by the characters. A black and white piece that uncovers that era’s traditions and prejudices, the film is an unmatched historical drama about slavery in Romania.

A film about the mother-son relationship, about the parent’s will to keep their children by their side, contrary to the children’s wish to escape and build their own independence. The film features extraordinary acting by Luminita Gheorghiu, the mother wrestling to save her son from manslaughter charges, using influence and corruption. An amazing piece directed by Calin Peter Netzer, Child’s Pose showcases a character indifferent to the conditions of those around her, but dedicated to her son.

A Cristi Puiu film mixing comedy and drama, winner of several international awards, Sieranevada is one of the most recent chef-d’oeuvre of the Romanian cinema. What may seem a morbid gathering to commemorate the death of Lary’s father, happening just three days after the Charlie Hebdo attacks, sets the backdrop for a tension-filled family reunion, scattered with conflicting debates and Romanian clichés. A film that engages the viewer from beginning to end, trying to grasp the connections between its characters, portraying the individual and collective beliefs of the Romanian nation, built on different archetypes.

Winner of the Best Director award at Cannes Film Festival, Cristian Mungiu creates yet another cinema jewel. A powerful drama about a father and daughter relationship. Romeo’s plan is to send his daughter Eliza to study abroad after her high school graduation, taking her away from the country’s corrupt system. But on the day before the exam, Eliza is assaulted, so her future is endangered. Romeo has to pull some strings for his daughter to succeed, against all the principles he taught his daughter about. A genuine piece about integrity and moral choices.