Spotlight on a Romanian Region: Crișana 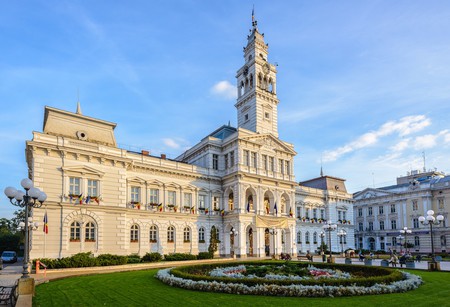 Crișana is Romania‘s region of mineral and thermal waters, outstanding architecture, royal residences and wondrous caves. Its surprising cities, hidden treasures and natural sights wait to be discovered, explored and enjoyed. While the region is mainly popular for its thermal spas, Crișana has a particular charm that can make every traveller fall in love with the area.

Strongly influenced during the Austro-Hungarian occupation, Arad’s architecture showcases both defensive structures, through the Vauban-style citadel, and administrative buildings erected in Art Nouveau, neoclassical and eclectic styles. Outstanding masterworks, such as the Mayor’s House, the Justice Palace, the Cenad Castle or the Culture Castle are among the most impressive buildings in the city. The neo-Gothic Red Church is a can’t-miss for those passionate about architecture, a strikingly beautiful monument of the city.

For the museum lovers, the Muzeal Complex of Arad offers an overview of the city’s history in the History Museum, located in the Palace of Culture, of the local artistry in the Art Museum or of one of the oldest viticultural areas of Romania, the Minis-Maderat vineyard.

One of the most beautiful towns in Romania, Oradea has eye-catching architecture. During the Austro-Hungarian occupation, Oradea was a cosmopolitan centre of different cultures and religions. At the beginning of the 20th century, the city was dotted with modern buildings erected in Vienna’s Secession style. Today housing the Museum of the Cris Rivers, including natural science, archaeology, arts, history and ethnography sections, the splendid Baroque Palace was designed to look similar to the Belvedere Palace in Vienna. Other remarkable buildings include the Episcopal Palace, the Church with the Moon, as well as the 12th-century citadel of Oradea, the best-preserved citadel in Europe.

For the culture lover

Centuries-old citadels and royal castles adorn the region, creating fairytale scenery and taking the visitor back in time.

A symbol of Romanian royalty, the charming little castle located in Săvârșin in an enchanting scenery sits at the base of the Metaliferi Mountains. Dating back to the 17th century, the castle was at first the property of the Hungarian family Forray, erected in a neoclassical style. Its next owner, King Michael of Romania, didn’t enjoy it much, since during the Communist era the castle was confiscated and divided into living apartments. Since 2001, the royal family has regained its property, converting it into an appealing residence that they use to spend every Christmas.

A post shared by Familia Regala a Romaniei (@familiaregalaaromaniei) on May 24, 2017 at 5:53am PDT

One of the most beautiful medieval citadels of Romania, the Șoimoș Citadel is a 13th-century stronghold, the former property of the Corvin family and then of Prince John Sigismund and his mother, Princess Isabella. Erected with a defensive role, the citadel was renovated into a Renaissance style once the princes moved in. Destroyed by the Ottoman invasions, it stands today as a witness to its old glory days.

Another Medieval citadel, Șiria Fortress, stands over the Citadel Hill, in the foothills of the Zarand Mountains. What is today the shadow of the old glorious citadel, it served as a fortress for some of the most illustrious princes of Transylvania. Destroyed at the end of the 18th century by the Habsburgs, the citadel was left in ruins. However, today it attracts history buffs as well as the paragliding enthusiasts.

For a laid-back holiday

If your plan for your next holiday is to relax in thermal water pools, get a massage or relaxing treatment, then the Felix Resort, near Oradea, is the ideal destination. Cosy guesthouses and luxury hotels with indoor and outdoor swimming pools offer their clients relaxed holidays. If you are going with the family, the little ones can enjoy multiple rides on the water slides or play in the children’s swimming pools, in places like Apollo Swimming Pool or Aqua Park President. Meanwhile, the adults can enjoy the silence or, for those who are more active, animated sessions of water aerobics.

Crișana awaits to surprise you with some truly amazing creations of nature. The region is well known for its mineral waters and for their healing effect in particular, as well as the awe-inspiring caverns.

In the heart of the Apuseni Mountains, Stâna de Vale city is surrounded by stunning landscapes. Running from the mountains, the ‘Woder Spring’ flows into Stana de Vale in small waterfalls, being one of the most appreciated spring waters in Romania for its healing properties. During the summer, you can also fish or start your trek in the Apuseni Mountains from Stâna de Vale, following the marked trails towards Grota Ursilor, Cabana Padis, Moara Dracului or Pestera Alunului, while in the winter you can ski its slopes or take a ride with your sleigh.

For the speleology aficionados, in Crișana you will find the only place in the country where you can admire black crystals – in the unparalleled Crystals Cave. Formed from black limestone, the peculiar shapes formed inside the mountains create a unique backdrop.

Shielding one of Romania’s biggest glaciers, the Ghețarul Focul Viu Cavern is an impressive landmark of the region. The cold air is ‘held captive’ inside the cave, preventing the glacier from melting. Its Small Hall is adorned with stalagmites, while in the Big Hall the 68-meter-wide and 46-meter-high glacier dominates the room. All around, rock formations create a spectacular scenery, but the only moment when they stand out is when the sunshine’s reflections on the stalagmites create unique views that give the impression of a ‘live fire’ (focu viu).

Another major attraction, the Bear’s Cave, takes the traveller to a fairytale land where storybook characters jump off the page and parade inside the cave. A multitude of stalagmites and stalactite adorn the cavern’s walls and floors, stretching over 1,500 meters. The cave got its name from the bear fossils found inside the cavern, of an animal that disappeared 15,000 years ago. You can still see the last bear that tried to escape the cavern, stuck in its ceiling.

Perfect for thrill seekers, a hike through Galbenei Gorges will boost your adrenaline. Giant rocks were eroded by a small spring, forming spectacular gorges scattered with grottos, caves, subterranean rivers and waterfalls. Traversing the Galbenei Gorges, you will not only get closer to nature but also ‘hug it’, as in some places you have to climb on chains or hold yourself to a rope while embracing the cliffs. Yet, the views are totally worthwhile.

Finally, in the Apuseni Mountains, a little waterfall attracts thousands of tourists each year. A small river has dug through the mountain’s rocks, creating the marvellous Iadolina waterfall. To get there, you have to follow a forestry road. With the forests on both sides and mesmerizing landscapes all around, the hike towards the waterfall is a delight.

Mostly known for its wines, the region has produced some first-prize libations. The main vineyard is the one in Miniș Maderat, stretching over the western hills of the region. There, the native variety Cadarcă is produced, a red wine that was once enjoyed at the imperial court of Vienna in the 18th century. In 1862, the same wine earned first prize at a wine competition in London. Other wines like Pinot Noir, Merlot, Cabernet Sauvignon and Cabernet Franc are produced using classical methods. Those who prefer white wines can taste the delicious Italian Riesling, Traminer, Pinot Gris and Sauvignon Blanc.

When it comes to food, some of the traditional dishes that you should try are: kohlrabi soup with dumplings, served with cream and parsley, pork sausages in wine sauce, spiced with garlic, bay leaves and nutmeg and sarmale. However, the sarmale are prepared differently than the other regions, using vine leaves stuffed with beans, rice and lentils or replacing the pork meat with chicken meat, mixed with rice and rolled in cabbage or vine leaves.

For dessert, the fruit soup or the papanași made with polenta and sweet cheese will surely surprise your senses.