Spotlight on a Romanian Region: Banat 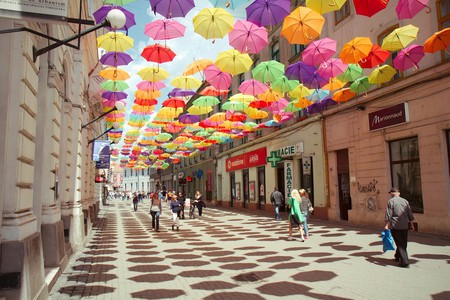 A land where Romanians, Swabians, Serbians and Hungarians lived together for centuries, Banat in south-western Romania is a multicultural region with a unique culture. Bordered by the Carpathians in the north and the Danube river in the south, it makes for a fascinating and scenic trip. Here’s your ultimate guide.

Also dubbed ’Little Vienna’, Timișoara boasts an outstanding architecture, dominated by Baroque and Secessions styles. Mixing modern buildings with medieval architecture, Timișoara is a city of culture, youth and some firsts in the Romanian history – it was the first city in Romania to have electric public street lighting, and was also the first city where the 1989 revolution started.

Today Timișoara is mostly known for being a cosmopolitan city, a university centre and the chosen 2021 European Capital of Culture. When in Timișoara, be sure to check out Maria Square, where the Romanian Revolution of 1989 started, take a walk in the beautiful Piața Victoriei, dominated by the majestic Opera House and Orthodox Cathedral, a mix of Romanian and Byzantine architecture, or marvel at the Baroque buildings in Union Square.

In the city’s oldest building, the Huniade Castle, you can explore the Banat Museum, with its history, natural sciences and ethnography sections. Art lovers can discover the Romanian national painters in the Art Museum, located in Unirii Square, in an outstanding Baroque building.

Thrillseekers can take a canoe trip on Bega River for their daily dose of fun.

The only round village in the country, Charlottenburg is a unique 18th-century village built by Swabians; German colonists coming from Baden Wurttemberg, Lorraine and South Tyrol. The houses, stables and barns form a perfect circle, with all the houses being the same height and having the same distance between them, creating a perfect symmetry. Today there are only a few Swabians left, but the village is an unparalleled landmark of the region.

Another former German village, Gărâna, is today well-known for its Jazz Music Festival. Since 1977, the village houses a fantastic open-air jazz festival where artists such as Eberhard Weber, Charles Lloyd, Jean-Luc Ponty, Miroslav Vitous have enchanted the public with their magnificent jazz music. In a location boasting a wild nature, the rhythms of jazz lure music lovers amid a bucolic décor, to venues inside churches, in the meadows, and in the open air.

If you are looking for some local cultural hidden gems, you should visit the village of Giroc and the Ethnographic Collection of Marius Matei. Passionate about local culture, Marius Matei gathered, over time, more than 850 traditional costumes from the Banat region, being determined to preserve the local customs. The first pieces of his collections belonged to his grandmother and great-grandmother. Depending on gender, age, and social status, the costumes have different models and colours. His collection is completed with traditional jewellery, old photographs and pottery objects. A true treasure of local crafts.

The pottery of Biniș, today exhibited in the Banat Museum of Timișoara, has its roots in the village of Biniș. An old craft centre, Biniș was known for its pottery until World War II. Today, only one potter takes the handicraft further, creating beautifully ornamented vessels with ancient motifs, made with earth and natural ingredients only.

Banat is a region filled with breathtaking landscapes. Explore its natural parks and discover some impressive sceneries, beautiful forests, magical lakes and waterfalls.

If you like getting lost in wild nature, the Nerei Gorges-Beușnița National Park is the place to be. The light blue water of the Ochiul Dracului and Ochiul Beului lakes look surreal, while the Beușniței waterfalls are like something out of a fairy tale. The park is home to the Bigăr waterfall, one of the most impressive waterfalls of the world according to The World Geography, where tiny shreds of water flow over mossy rocks.

For hiking and skiing, the Semenic-Cheile Carașului National Park offers some exciting opportunities. In its system of wild caves, travellers can discover one of the biggest caverns of Romania, the Cormarnic cave, with 5,229 meters (17,156 feet) of galleries, featuring monumental halls and stalagmites that took quirky shapes. Coming second, the Buhui Cave counts 3,217 meters (10,555 feet) of galleries, entirely crossed by Buhui stream.

If you are up for a long trek, head to Carașului gorges, one of the wildest and longest of Romania, stretching over 18 kilometres (11 miles) and bordered by tall rock walls sprinkled with caves, an array of flora and fauna species, including beech forests that create fairy tale landscapes in autumn.

Wintersports lovers can enjoy the snow six months every year in the Semenic mountain resort.

A paradise for hikers, mountain climbers and mountain peaks conqueror, the Retezat National Park is where you will find nature at its wildest. A challenge even for the seasoned traveller, the Retezat Peaks such as Peleaga or Păpușa overcome 2,000 meters (6,561 feet), modelled by glaciers that created terraced valleys, glacial bays, waterfalls and more than 80 lakes, including the largest, Bucura and the deepest, Zănoaga in the country. Each peak comes with some awe-inspiring views and an unforgettable experience.

On the other side of the region, the Danube flows slowly between rocky banks covered with forests. Creating a natural border between Romania and Serbia, the river crosses the southern part of Romania, offering some splendid views at Cazanele Dunării, where the river goes from wide to narrow to wide again.

On Danube’s banks, carved in stone, is the statue of the former Dacian ruler and ancestor of the Romanians, Decebal. Sculpted by 12 alpinist-sculptors over a period of 10 years, the statue is 55 meters (180 feet) tall, being the highest stone sculpture in Europe.

With a history dating back to the 15th century, the Recas vineyards produce some remarkable wines. At Recas, you can taste Fetească Regală, a great Romanian white wine, as well as international varieties like Italian Riesling, Sauvignon Blanc or red wines as Cabernet Sauvignon, Merlot or Pinot Noir.

A mix of Romanian, German and Austrian flavours, the local cuisine is mainly based on pork meat and full-flavoured vegetables. Using thyme, tarragon, cumin and hot paprika, the locals prepare delicious meals. One of the local specialities is the iofca, prepared with homemade noodles, cabbage or cheese, nuts, milk and poppy seeds. To this, you can add the paprikash served with dumplings, chicken and pork goulash, giblet soup and tarragon chicken stew.

If you like sweet treats, then you should definitely try the vargabeles, a mouth-watering homemade noodle pudding with cheese and raisins, baked in the oven.