Paul Neagu Is The Romanian Sculptor Who Gave Philosophy A Form

In a Cold War era, where political tensions hampered ties between Western and Eastern European artists, Paul Neagu became an artistic bridge. Settling in the UK but holding firm to his Romanian roots, his sculpture, philosophical focus and energetic performance drove his own artistic development and left a lasting impression on a new generation of both British and Eastern European artists. Here we examine the life and work of a figure who sculpted philosophy into tangible forms. 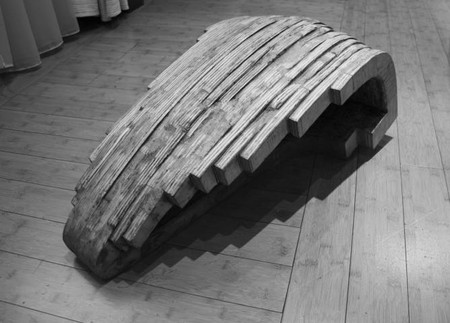 Paul Neagu almost never made it out of Soviet Europe. In 1969, Stalinist travel restrictions were briefly lifted, allowing Western Europeans to enter the Eastern bloc. Richard Demarco, an Edinburgh-based artist and originator of the city’s Fringe festival, took the rare opportunity to visit Bucharest. It was there that he met and was impressed by Neagu, a young sculptor, offering him an Edinburgh show and the chance to leave Romania. Neagu moved to the UK in 1970, following the success of this initial exhibition. Eight months later, the Iron Curtain tightened once more. It would not be fully lifted again until the fall of the Berlin wall.

By the time he had emigrated, the young Neagu had already sampled a variety of trades – electrician, cartographer, draftsman, railway worker. His close affinity with practical, material work, along with his father’s shoe-making profession, would consistently feed into his artistic practice. The roots of his tactile, physical approach can perhaps be traced back to this early experience with moulding leather throughout his youth, which sustained him during the tough economic pressures of post-war Romania.

He also spent the late 1950s preparing for university entrance exams. He was – and continued to be – a keen philosopher, nearly studying the discipline as an undergraduate before being admitted to the Beaux Arts Academy in Bucharest as a painter in 1960. It was here that Neagu first experimented with abstract works, during a period where Soviet-influenced art schools were predominantly governed by social realism and restricted in their correspondence with Western practitioners.

Neagu’s Edinburgh show in 1969 consisted of a dark room in which objects were hung from the ceiling. Visitors were encouraged to feel and play with these objects, the black painted walls and dim lighting forcing audiences to experience them via touch. This tactility and the element of human interaction accompanying the piece would remain a cornerstone of Neagu’s work. In the same year, the artist produced a ‘Palpable Art Manifesto!’ in which he declared: ‘the eye is fatigued, perverted, shallow, its culture is degenerate, degraded and obsolete, seduced by photography, film, television… You can take things in better, more completely, with your ten fingers, pores and mucous membranes than with only two eyes.’ 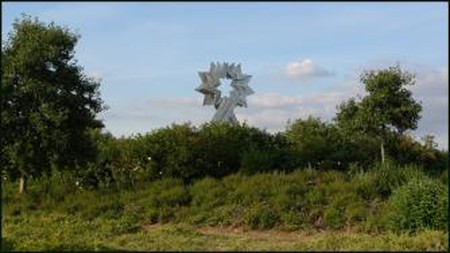 Neagu exercised a keenness to escape purely visual aesthetics, to draw viewers into closer, physical relationships with the objects he produced and to bring a fresh sensory element to artistic experience. The early 1970s saw a development of the themes set out in his Edinburgh show. His ‘tactile objects’, as they were named, often involved box-like shapes with operable doors, wood and leather coverings and audience members feeling the surfaces and interiors of each piece.

‘Going Tornado’, filmed in 1974 and performed live several times during his career, was a piece Neagu himself deemed a pivotal moment in his artistic development. This strange, varied and athletic show revolved around the idea of central vortexes and spiral movement, echoing spiritual rituals inducing transcendental or ecstatic states, states of both sharpened awareness and heightened creativity. The performance also involved roller-skating, the compartmentalisation of the body using leather straps, the discarding of everyday clothes and the juxtaposition of other household items such as scissors, apples and twine. As a microcosm of Neagu’s wider portfolio and concerns, the piece showcases some of his furious energy, the close relationship between the human body and the object it creates and, crucially, the bond between remarkably physical materials and broader, philosophical inquiries.

This link between earthly, material creation – rooted in Romanian wood carving, Eastern European folk traditions and Neagu’s own vocational background – and philosophical inquiry aided by a reliance on symbolism, were what marked Neagu out as an innovator during the 1970s and 1980s. British art at the time was considered to be mistrustful of symbolism, reluctant to engage with serious, grand examples of metaphor and often opting instead for irony, close analogy and playful aesthetics. Neagu saw the artist as a philosophic voyager rather than merely an aesthetic craftsman. Creative acts, for him, engendered ideas and held philosophical ramifications. 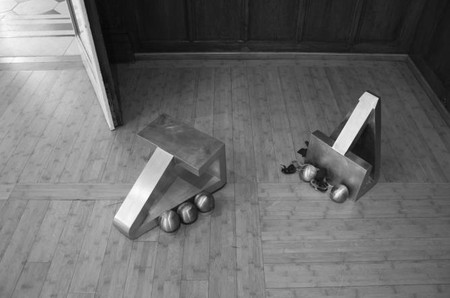 This conviction would find its place most firmly in the ‘Hyphen’, a form Neagu created in the mid-1970s that he would remain fixated with for the duration of his life. Grounded in the cobbler’s last –the triangular piece of wood or metal on which shoes are made or repaired – this tripod-like structure was tied to both the physical work of his Romanian heritage and the symbolic potential of the trinity. It also represented a three-tier system in which Neagu envisioned himself – and all artists – working, a system incorporating the material, the structures and the shaping forces of society as well as the wild, often unbridled energy of creative expression.

Despite appearing in several galleries and receiving UK Arts Council grants, Neagu led a relatively ascetic life. Housed in a small, North London council house, fringed with financial worries and increasingly frayed by poor health, he managed to supplement his artistic work through teaching, first at the Hornsey College and later the Chelsea School of Art. Through these establishments, Neagu would become a tutor and inspiration for artists such as Antony Gormley and Anish Kapoor. Pupils held him in high regard. Friends and colleagues remarked on his impressive ability to converse in highly abstract terminology and to engage in rigorous intellectual debate, even in the English tongue – which was naturally foreign to him. After suffering a stroke in 2001, his linguistic flair was sadly blunted. Nevertheless, the dialogues he sparked as a teacher were perhaps as influential as the works he created as a practitioner.

In his prime, it is almost as if the artist straddled a gap between philosophical orator and humble craftsman. Kapoor, speaking in a film released shortly after Neagu’s death in 2004, said that the Romanian sculptor brought about his ‘first awakening to the idea that there are philosophical, metaphysical consequences or repercussions out of physical acts’. It is in this way that Neagu’s ideas – as much as his created forms and the bond he stressed between the two – served to influence a subsequent generation of British artists.

Some critics have been reluctant to endorse the Romanian’s theoretical intensity and severity, others have seen him as a necessary, energetic force in British art theory. Today, his physical presence remains in various public collections, including the Tate, the Philadelphia Art Museum and the Hugh Lane Municipal Gallery in Dublin, as well as two national monuments in his native country, the ‘Century Cross’ in Bucharest and ‘Crucifixion’ in his home town of Timisoara.