One of the most acclaimed figures in 20th century Romanian Literature, Nichita Stanescu’s poetry is cherished in his home country. Constantin Preda looks at how his work became increasingly philosophical, engaging with existentialism and the metaphysical, whilst remaining a personal record of Stanescu’s struggles. 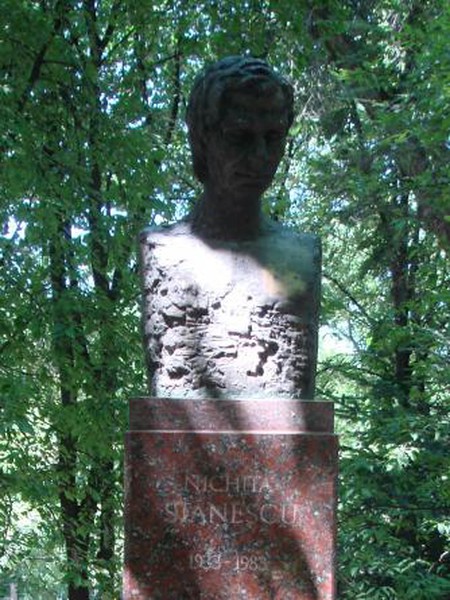 An artistic revolution was fomenting in late December 1965, when Nichita Stanescu was living in the suburbs of Bucharest in a cold room whose floor was the frozen ground itself. His sole possessions at the time were hardback copies of the Book of Job and The Epic of Gilgamesh, a collection of Rilke’s poems and a manuscript of about 300 pages containing his own poetic work. After braving the cold and the hunger for a few weeks, during two days and two nights of feverish inspiration, Stanescu dictated, to his lover Gabriela Melinescu, nine out of the eleven poems that would be later be published as the 11 Elegies. In these 11 successive deaths the idea of a new Romanian poetry was born.

‘I am nothing but / a blood stain / that speaks’, wrote Nichita Stanescu in a poem entitled ‘Self-Portrait’, and for an audience unfamiliar with his work, this short poem could serve as the central metaphor from which a compelling understanding of the poet’s work emerges, for there are few poets as concerned with how the metaphysical emerges out of the physical experience of life and how poetry can represent ‘what separates man from anything else’.

Nichita Hristea Stanescu was born in the spring of 1933 and was destined to live during some of the most extraordinary events of Romania’s recent history, i.e. the Second World War and the onset of an idiosyncratic and anachronic type of communism. Yet despite the difficulties he encountered in attempting to work and publish under the all seeing eye of communist censorship and having to write in a climate of state sponsored mediocrity (what literary historians later defined as social realist Proletkult literature) he never disavowed the times he was living in. He modestly declared that ‘no poet has his/her age but that the age itself has its poets’, and thus undertook the burden of his talent and literary vision with alacrity, giving us some the most celebrated, original and profound Romanian poetry of the last century by simply redefining it.

His genuine poetry had begun with the 11 Elegies despite the fact that he had published two volumes of work before 1965. Convinced that there are two types of artistic structures, as opposed to schools of thoughts and literary currents, he deduced that there are also two types of artists, artists that see ideas and artists that see sentiments. Consequently, it can be said that in late December 1965, Stanescu started seeing ideas and presenting them as poems. In the poems of that volume, he ecstatically explored the chasm that separates animate and inanimate existence, the scope and purpose of the history of humanity, and the crowning aspects of a consciousness and will – creativity. Aware of the profundity of his philosophical insight he finishes the book with what can be best described as a primer for the way to accommodate oneself with the historical dimension of existence and how to attain one’s own individuality, for one has to strive ‘to be seed / and to lean on your own earth’ in order to live authentically.

During the following years he published 13 more volumes of poetry and became celebrated as a greatest Romanian poet of his age. He died at 50 years of age after seeing his work translated in numerous languages, winning the Herder Prize for poetry and being nominated for the Nobel Prize. However, in order to be properly acquainted with who Stanescu was, one has to steer away from biographical aspects of his existence, because as he had observed later in life, ‘the poet, much like the soldier has no personal life, his biography is his work’. We have to read, feel and experience his poems in order to get to know Nichita.