From Afghanistan to Guatemala, This Romanian Photographer Has Created 'The Atlas of Beauty' 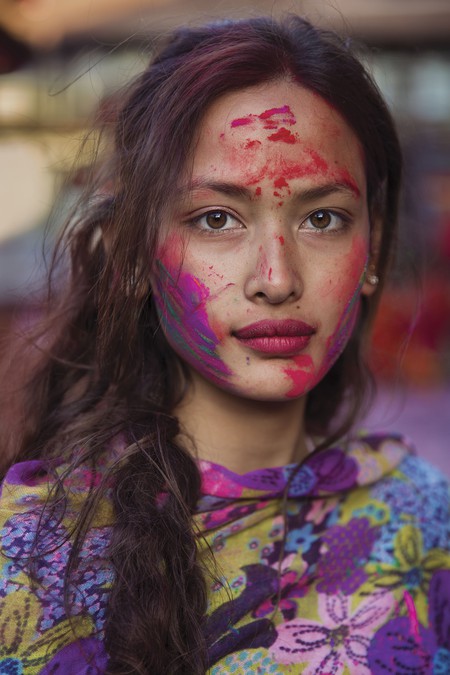 Romanian photographer Mihaela Noroc began photographing women when backpacking around the world in 2013. After a trip to Ethiopia, she decided to marry her two loves – photography and travel – and commit to documenting women around the world full-time. What started as a passion project quickly evolved to become series loved by millions around the world. To mark the launch of her new book, we met up with Miheala in London to find out the stories behind five of her favourite pictures.

Mihaela Noroc’s drive and desire to celebrate natural beauty is palpable and infectious – a feeling that shines through in her photographs. Almost five years in the making, Noroc’s first book is the culmination of ‘The Atlas of Beauty’ project which has been running online and across her social media channels since she began shooting. Mihaela’s chronicle of beautiful women from around the world has not only created a living memory of beauty, but also helped to break down existing preconceptions and prejudices by offering individual stories to a global audience: each picture posted tells a global, human story through the lens of one woman.

The new book brings together 500 portraits, taken everywhere from refugee camps in Greece to glaciers in Tajikistan’s Pamir mountains; from Winnipeg to Reykjavik; from São Paulo to the Indian city of Pune.

Here, she tells Culture Trip the story of five of her most memorable encounters.

There is a very unique place on earth called the Wakhan corridor in Afghanistan, and it borders Tajikistan. The people I visited live in the Pamir mountains, so are protected from the Taliban; this is important as they are Shia and Taliban are Sunni usually, so if they reach this place all the people who live there will be murdered because of difference in religion. A big problem for them is a lack of medical care. When I went there I only brought medicine for myself, and they kept asking ‘do you have paracetamol’ because there’s no medical care in the area at all. So the women have their day-to-day problems and they live in harsh environments because of politics and years of war.

In spite of this, women in the Wakhan Corridor are extremely open to photography. They’ll take you from the street into their houses and get you to photograph them because they love pictures. There’s no access to technology at all, so for them it’s an instant minute to be remembered for their whole lifetime.

I found out about this specific area through research and travel. I like Central Asia a lot: if you’re a photographer you’re going to look for things that aren’t so reachable. In my project I like to have both areas – near and remote – because I want to portray the world as complete, and not necessarily to extract something. In the book I put this picture right next to a woman from Israel because they have the same eyes. And this other woman she’s like a music, hipster girl and this woman from Afghanistan she lives in a completely different world but they both live in the same age. It’s a good book to understand the differences.

This woman is 18 years old, has been married for two years and was just working on the fields. They have a very ancient style of living, it’s like stepping into a museum. I stayed there for one week. Luckily I met a boy called Mohammad who was 15 years old, he spoke a bit of English and wanted to help me. We had lots of fun, I stayed a lot with him and his family. They said they maybe have four people a year coming to visit. 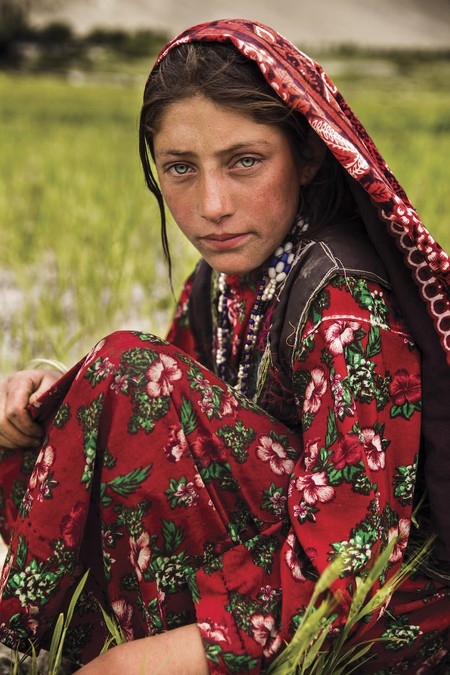 Anja, born in Poland, raised in Belgium and photographed in France

I’ve never seen such a joyful person in my life. Anja was born in Poland without a leg, and because of that her mother had to give her up for adoption. The doctor kept her in hostpital for 90 days without any hugs or anything, until he found a family in Belgium that good take care of her properly. Because in Poland they didn’t have the proper resources to manage the problem she had.

So she grew up in a village in Belgium taking care of animals and having this ‘farm life’. And then she got into sports. She wants to participate in the paralympics, and she wants to become famous across the world so that she can tell her mother ‘I’m not upset with you that you gave me up for adoption, I know it was hard for you.’ She’s training for running. She has the new leg which she told me cost around €35,000 and she got sponsorship for that.

Anja is also ‘travel girl’, and we met in France. We’re still in touch and I’m going to meet up with her in Berlin to celebrate her birthday. It’s cool to have an amazing network of women to meet up wherever I am in the world. There’s so many emotions in the book, from crying to laughing, it’s all the feelings you’re going to have as a woman. Beauty has such bad connotations, but I want to change the perceptions of that word and give it back its meaning – make it about kindness and humanity. 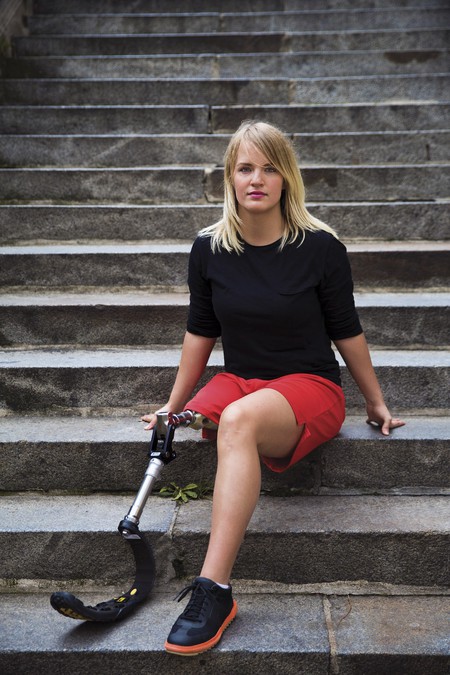 Holi is time for reconciliation, it’s very colourful and a great moment to photograph. I didn’t know exactly what to expect in Nepal, but there weren’t too many women on the street. The process of Holi is that someone is going to come and touch you or throw some coloured powder at you. It means that the women are not supposed to be on the streets to do that. I went out in the morning, it was mostly just men, and by the end of the day I was covered in colour – as was my camera.

Towards the evening I saw Sona, and her face was quite clean still because she had only just come onto the streets. She stood out, for sure. She had something extremely beautiful and natural. She’s the most popular picture on my page, I think. She’s very happy about it, her father is very happy about it. I stay in touch with the women I photograph afterwards, and explain what I’m doing.

People always ask me if I retouch the photographs, but the answer is no. I always try and get the colours right but it as much of the reality as you’ll have in front of your eyes. Black and white photography is much more unreal, because the world isn’t like that, it’s full of colour. 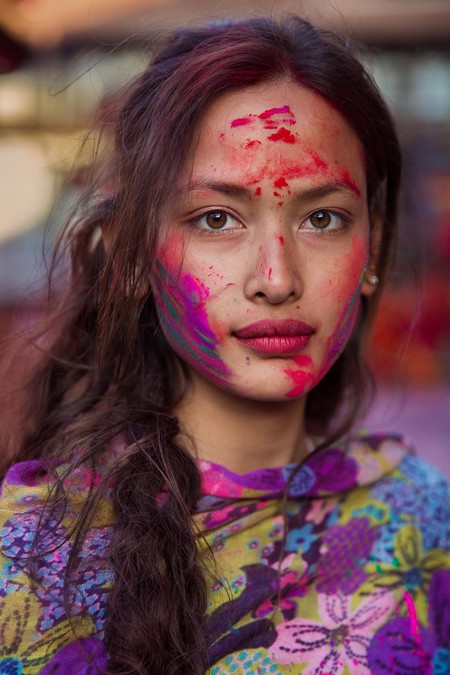 I saw the youngest sister in New York and she looked really cool and she said ‘of course I want to be a part of the project, but you have to meet my sister because I really look up to her.’ And the next day I met with both of them, and they were so impressive with their university degrees and education. They lived in seven countries and they were educated in the US, their parents worked at the UN. They told me that they want to go back to Africa and share the knowledge they have gained, but they don’t want to change the culture or impose a mentality, they want to feed it into the community.

I always like photographing sisters or mothers and daughters or pregnant ladies because I think it’s part of our beauty, the family. I admire people that can stick together and help each other out, and I believe in female power and how women help each other. 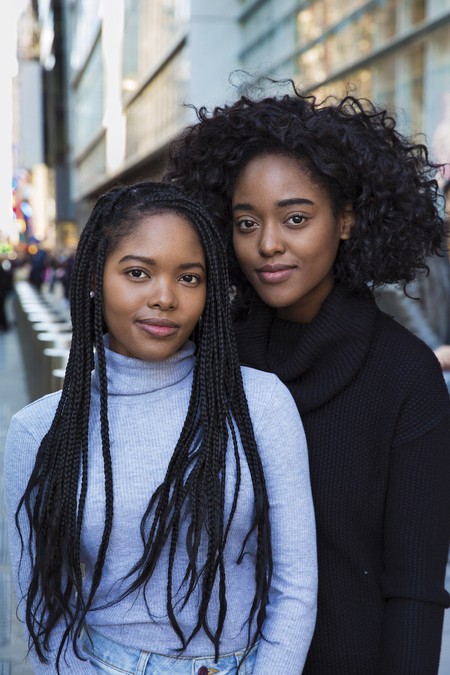 US | © Mihaela Noroc, The Atlas of Beauty published by Ten Speed Press.

It was a great experience to be in Guatemala. This picture was taken in Chichicastenango. Twice a week they have a a huge market, and people come from everywhere to sell their goods: you have everything from homemade shoes to homemade food. The culture in Guatemala is very alive. The women usually make their own clothes by hand, and everyone crochets by hand with their own unique style which has its own special meaning. I know in my culture in Romania we have a similar thing where embroideries tell the story of the woman and her life; it’s like a history on the clothes.

So this woman was at the market. I snapped one picture and that was it, she has the most lovely and most genuine smile you can have. I wrote in the book that women all over the world are carrying these burdens on their shoulders and we don’t appreciate it, and yet they carry these burdens with such dignity. 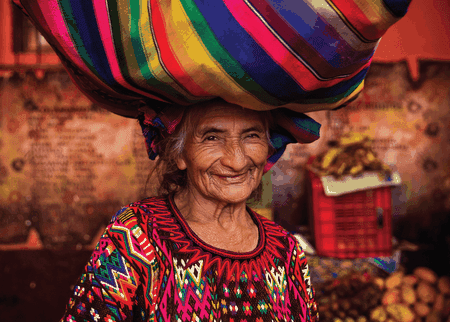 The Atlas of Beauty: Women of the World in 500 Portraits, is available to buy now.