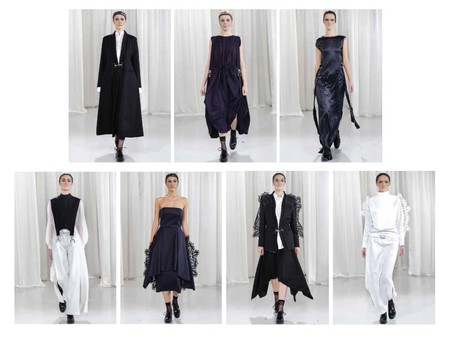 Home to a diverse artistic scene, one that has been overlooked and underestimated for decades, Eastern Europe is experiencing something of a renaissance.

It’s been twenty five years since the dissolution of the Soviet Union, enough time for the younger generation to find the courage to step out of the shadows of history, and begin to imagine an identity that is their own. This collective vision is what has produced the explosion of new ideas, designs and aesthetics that are beginning to emerge today, and it’s no coincidence that Eastern European fashion has recently found itself in the spotlight. 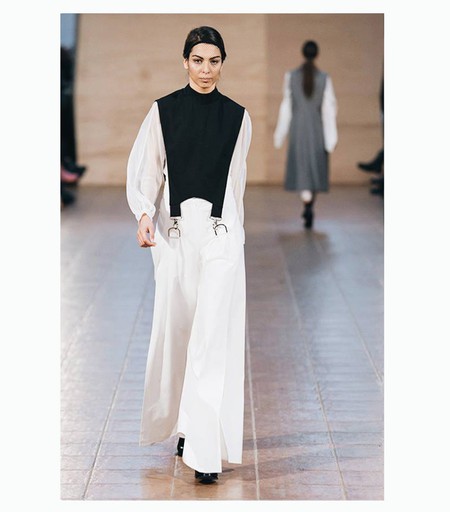 In 2016, brands such as Vetements and Gosha Rubchinskiy convinced the world that the post-Soviet look is the new cool, with many other Eastern European designers quick to follow suit. The ’90s, grunge meets street-style couture hybrid that Demna Gvasalia and Gosha have made famous gained so much momentum that Vogue was inclined to declare: ‘The Eastern European girl is the new French girl.’ Fashion has come to the fore of the cultural canon, and the world is watching.

One such fresh talent to watch is Andreea Castrase. Born and raised in a small town in Romania, Castrase beginnings have not stopped her from having a thoroughly international outlook. ‘Growing up in a post-communist country, I can relate to the references borrowed from subcultures, but also from everyday life, such as fake sportswear, kitsch house decorations and subcultural stereotypes. In my previous work, you can find subtle hints of inspiration coming from the post-communist background, although it was never too obvious,’ she said. 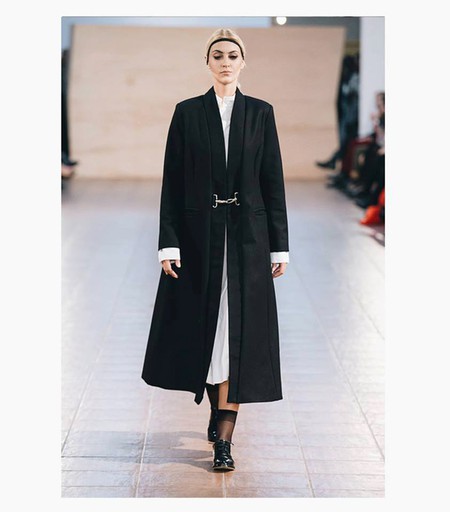 Despite being only 25 years old, Andreea already knows who she is as a designer. She has a very specific eye, with work that is intriguing in the way it marries an austere aesthetic with a strong sense of emotion.

Before creating each collection, Andreea looks to find inspiration from sources that can help her translate the concept of the collection in accordance with her personal vision. Her designs are wearable but at the same time conceptual, reflecting more than one artistic domain. Her most recent collection, Rites of Passage, is based on a universal theme: passing rites (birth, marriage and funeral), the ceremonies connected to these rites, but also the transition the character goes through.

A sequence of black and white, sometimes interrupted by navy blue or grey, draped dresses, smart tailoring, laser-cut lace and carabiners as a recurring element – this is Andreea’s girl. She’s complex, romantic, yet somewhat masculine. 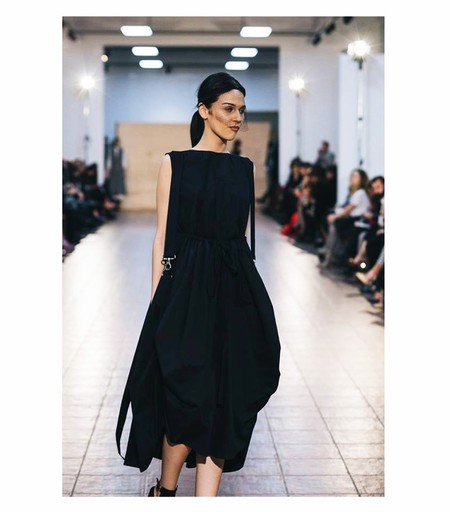 Andreea always had an affinity for the applied arts. Since she was little, she would sketch and paint, trying to tell stories and express ideas through different media. She realised that fashion was the best means of visual expression, so after finishing high school she moved to Cluj-Napoca in North West Romania to study fashion design.

In the East, the decision to study fashion is sometimes seen as a mistake as the risk involved in becoming a lawyer or a doctor is a lot lower than launching a career in the creative arts. Because of a tumultuous past people desire economic security above everything else, and their reluctance to study fashion is understandable. Opportunities are limited, and even if you do succeed in getting the necessary training, it is near impossible to sell designs in a region where the fashion industry is only still slowly developing, and where people don’t really take an interest in new talents. This, coupled with production difficulties such as the lack of a diverse selection of materials available, means that avenues to commercial success are limited. In Romania, the average wage is under €600 a month, and a lack of capital combined with unforeseen business expenses also represent big obstacles to overcome. So while on an international level attention is being lauded on Eastern Europe, at home the situation remains more complex. 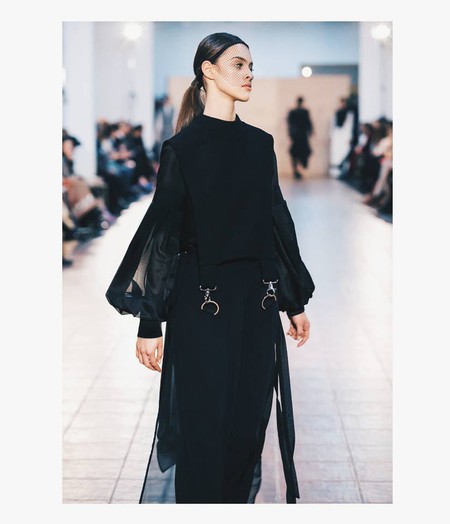 Luckily the internet can level the playing field a little bit by lending a helping hand. Eastern European designers, like everyone else, can rely on social media in order to promote their work locally and internationally, find opportunities online or even gain access to fashion events aiming at promoting new designers worldwide.

Indeed Andreea is proof that hard work pays off, even in less than ideal circumstances. After graduating in 2015 from the University of Art and Design in Cluj-Napoca with a MA in Fashion Design, she went on to receive important awards and recognitions such as Best Young Designer at Elle Style Awards and Best Young Designer at Beau Monde Awards, and gained more experience while working for brands such as Ann Demeulemeester and H&M.

“The context in which fashion is created is an important factor and can influence the direction, style, vision and visibility of a designer” Andreea notes. “But eventually,” she concludes, ” his own space, his universe, regardless of its location, is just the place where the designer creates, and talent, originality, consistency and relevance are more important factors in deciding if a designer is going to be successful or not.”