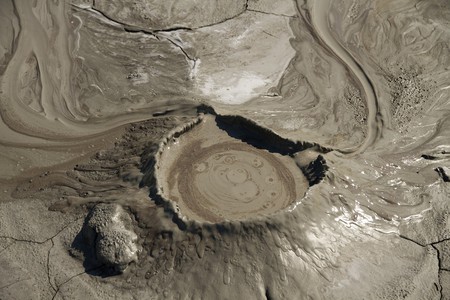 Ever wished you could go to space? Travel to Berca, Buzău County, walk around the Mud Volcanoes, a unique geological reservation in Romania, and you will enjoy some very alien landscapes.

The muddy phenomenon starts deep down, at a depth of 3,000 meters.

A post shared by Panagiotis Deligiannidis (@pdeligiannidis) on Jan 2, 2017 at 1:29pm PST

Gases erupt and travel to the surface through underground layers of water and clay.

They bring to the surface salty water and mud.

The cones of these miniature volcanoes do not reach more than five or six meters in height.

While some of the volcanoes erupt continuously, others do so at random times.

When visiting, it is forbidden to touch the volcano cones.

The mud volcanoes were first discovered by Frenchman H. Cognard in 1867, during oil explorations.

The area was declared protected in 1924.

How to get there: Take national road DN 10 from Buzău to Brașov and stop at Km 18. Take local road DJ Satuc-Berca-Joseni-Policiori until Km eight and on DC Pliciori-Pâcle until Km five. Continue for another three km to Pâclele Mici and one km to get to Pâclele Mari.