The Best Hotels in Constanța, Romania 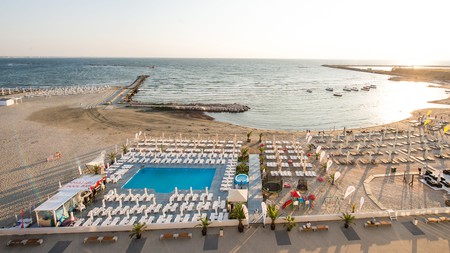 Despite the name, the Black Sea is anything but dark and gloomy; in fact, it is glittering blue, lined with pale beaches and bottle-green cypresses. Coastal Constanța, the oldest continuously inhabited city in Romania, repays a visit handsomely – not just its resort strip, Mamaia, but also the old port-city itself, steeped in myth and mystery, home to ancient ruins and crumbly old backstreets. These are the best places to stay. 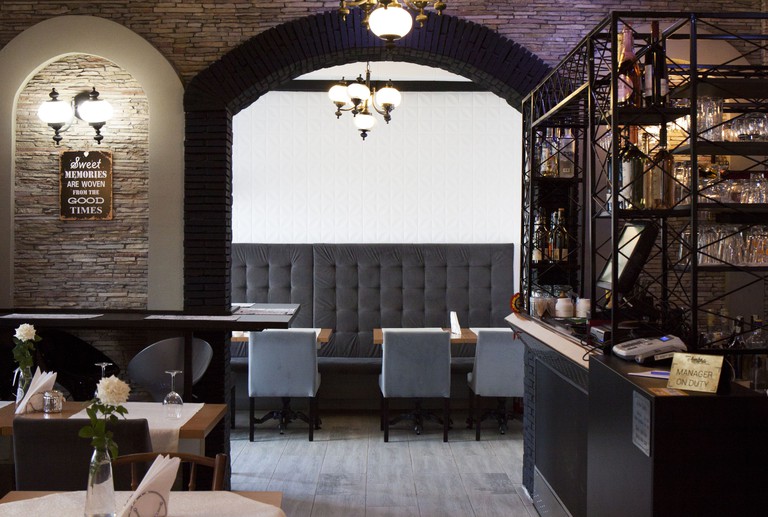 Courtesy of Ambra Boutique Hotel & Bistro / Expedia | Courtesy of Ambra Boutique Hotel & Bistro / Expedia
View Rooms
Just across the road from the imposing Soviet-looking House of Culture and its extensive park, Ambra hides behind heavy hotel gates up a set of stairs. 2km (1.2mi) from the sea and the beach, this is a comfy, business-friendly boutique of old brick walls and dark wooden chairs, fresh flowers and iron lamps: a suggestion of timeworn Europe. Its 20 rooms are gentle-hued, light and airy, bearing murals of romantic continental streets. If you stroll around the neighbourhood, stop first at Silvian for something sweet, just across the street.
More info 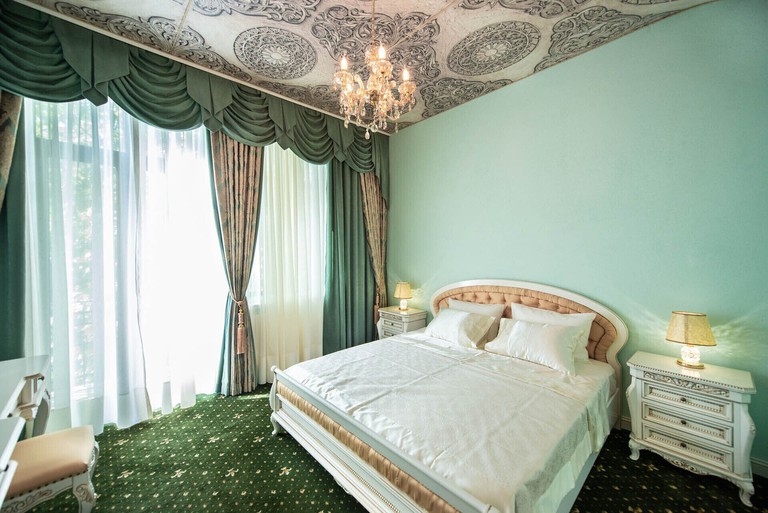 Courtesy of JMR Royal / Expedia
View Rooms
Not to be confused with Jumeirah, the Emirates luxury hotel collection – Jumeirah Royal Apartments, in the centre of Constanța, certainly rolls out the red carpet decoratively. There are six apartments, with vast free-standing tubs and elegant old-school taps, ski-lodge-style rafters and hulking soft beds. Pick “Regal” for its French-Empire-frilly bed and dresser; or “Royal” for its cosiness and carpets of, yes, royal-blue. If you’ve been binge-watching The Crown you’ll be at home in this 1920s building, with classic style all of its own.
More info 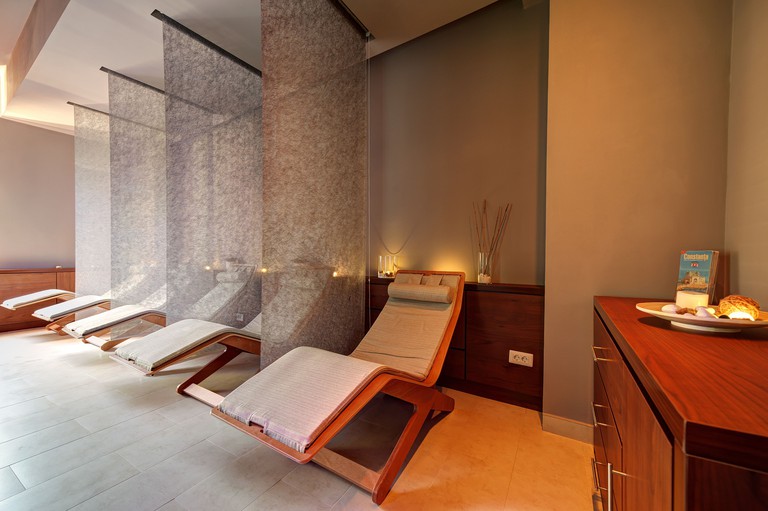 Courtesy of Iaki Hotel / Expedia
View Rooms
Constanța is a major centre for conferences, and this spick-and-span four-star, just north of the city in the resort of Mamaia, is where many attendees choose to stay; not only does it have four meeting rooms of its own (the largest accommodating 200), it’s also got an impressive spa. Here you’ll find scores of scrubs and massages, as well as a jacuzzi and giant pool edged by loungers. Rooms are bargainous, sea-view included. You won’t go hungry, with pasta dishes, seafood and fish mains making up a lengthy, appetising menu.
More info 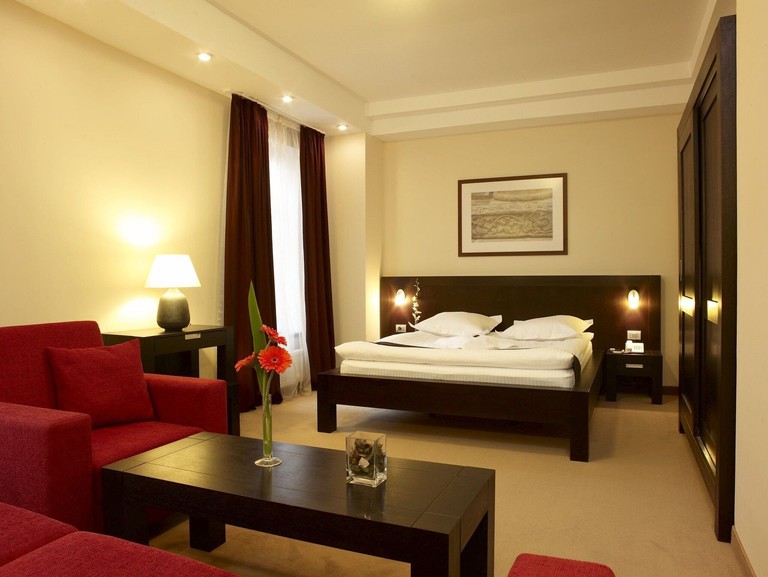 Courtesy of Hotel Cherica / Expedia
View Rooms
Once it was a stop-off for Romanian Orthodox monks travelling to and from Mount Athos on the Greek mainland. Cherica today, while still ascetic, is a place of pilgrimage for devotees of minimalism: the 18 suites of chunky-funky cubic furniture ooze rich chocolate and red tones. Giant black and white photographs on walls tell the tale, from its late-19th-century founding. And you may get more insights from ambassadors and dignitaries that regularly stay here, as you chat over your a la carte breakfast before heading out to the inhale the sea air.
More info 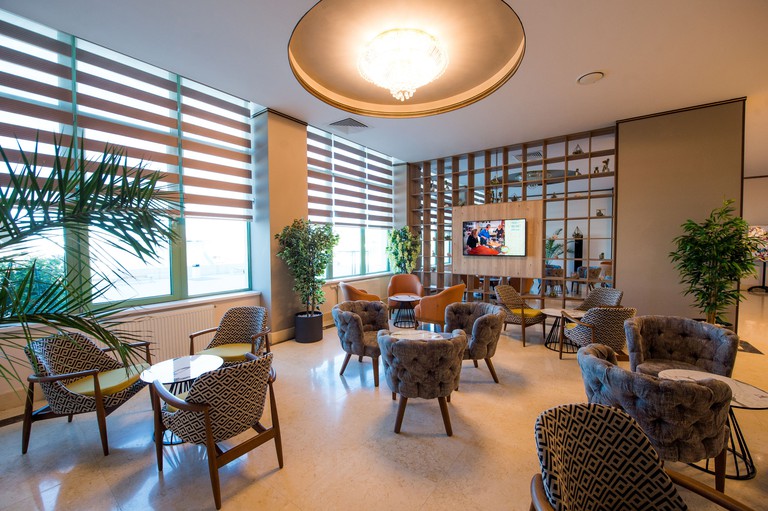 Courtesy of Hotel Malibu Mamaia / Expedia
View Rooms
As with Iaki (above), guests stay here for proximity to the Black Sea breezes in Mamaia – adjacent Lake Tabacariei means unspoiled views of water all around you – sunrises and sunsets are fiery highlights of any stay. You might have a cocktail by the pool bar after you’ve sunned yourself on the private beach. Many guests opt for a sedative massage in the spa afterwards. And the charming restaurant has a terrace overlooking the sea, just made for people-watching before you bed down in rooms of corporate unfrilliness: comfortable without designer edges.
More info 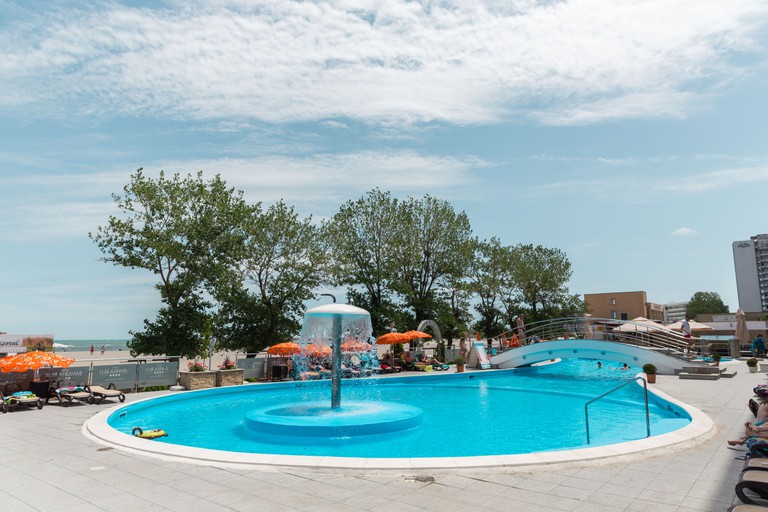 Courtesy of Hotel Bavaria Blu / Expedia
View Rooms
Families favour this Mamaia-located four-star check-in for its swimming pool with an area devoted to young ones. Events organizers choose it for its conference compatibility – the hotel can take up to 700 participants. But the most intriguing aspect is its fifth floor of 16 rooms themed after countries. The Australian room has reddish-brown wood furniture and a kangaroo-shaped rocking chair. Kenya enlists coconut wood and leather against raw green and sparkling gold. From Iran to England, take your pick.
More info 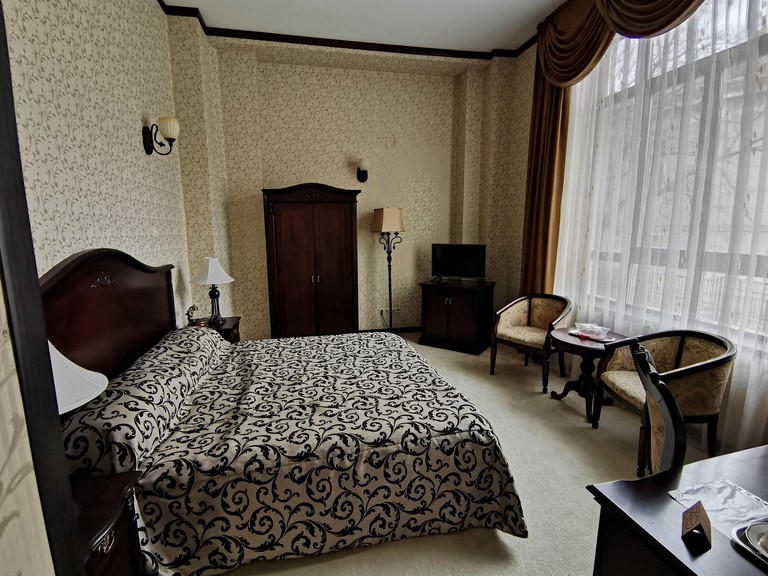 Courtesy of Hotel Carol Constanta / Expedia
View Rooms
This place has character by the bucketful; a night or two here and you’ll be in love with the Belle Epoque, that charmed part of the 20th century before the First World War. There are echoes of its elegance everywhere: fall asleep under cooling silk sheets and awake to sun shining through tall windows onto classical wallpaper. Admire Victorian furniture and paintings set in heavy, golden frames. Breakfast on fruit and cheeses before strolling the upper promenade and breathing in the sea air.
More info 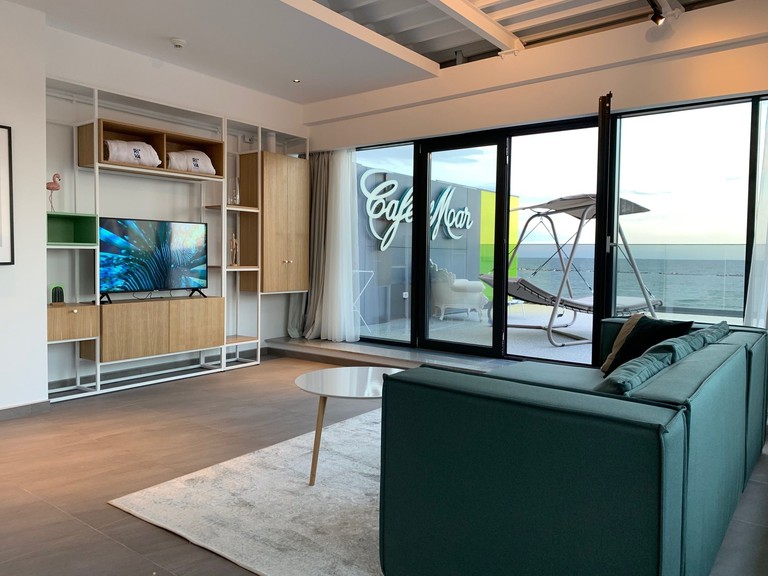 Courtesy of RIVA Mamaia Aparthotel / Expedia
View Rooms
The sunsets can be impressive, beyond the lounger- and parasol-dotted sands. The hotel itself feels more urban, though, with all the plate glass you’d expect of an office or bank. Interiors will appeal to anyone up for holiday hedonism: all razor-straight lines that let pops of pink, orange and green do the talking. The hip restaurant serves burgers (and it’s a yes to vegetarian options), pizza and freshly-caught seafood. And if you shuffle outside to the terrace, you can neck cocktails to clubby sounds as your skin glows from the hot beach day and the sun goes down.
More info
Give us feedback