For the Culture Lover: A Roadtrip Itinerary for Romania 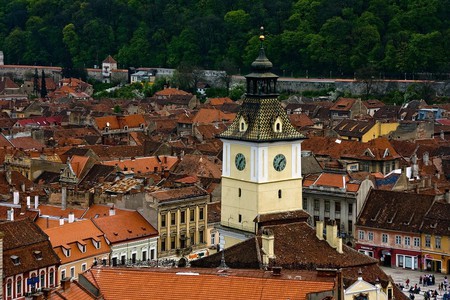 Planning to visit Romania? The country, Europe’s 12th largest, has among the richest and most varied cultural heritage on the continent. Read on for how to discover the country on a 12-day roadtrip that includes visits to Romania’s most beautiful cities, castles and millennia-old fortresses and churches.

Best for: anyone with a curious mind

Dotted with beautiful 19th century villas, the quaint mountain resort of Sinaia is home to one of the most charming castles in Europe: Peleş Castle. This Neo-Renaissance jewel built by Romania’s first king, Carol I, hosts an impressive collection of art and arms in its richly decorated rooms.

Today was a fairytale 🏰 #nofilter

Brașov will charm you with its picturesque old centre, medieval era architecture and lively restaurants. If visiting in winter, set aside half a day for a trip to Poiana Brașov, home to one of the most popular ski slopes in the country.

Just a half-hour drive from Brașov, Bran Castle awaits, perched on a cliff-top, surrounded by thick forests and an enduring myth: that of Count Dracula. The next destination, Sibiu, is one of the most important cultural and historic centres in Transylvania. Enjoy the city’s medieval charm, picturesque streets, quirky landmarks and delicious food.

Inhabited since ancient times, Alba Iulia was the most important city established by the Romans in the province of Dacia and the many remains left are there to prove it. Romania’s first smart city, it is home to the star-shaped 18th century Vauban-type Alba Carolina citadel, the largest and most charming in the country, which regularly hosts fairs and performances.

Visit Hunedoara for the biggest secular Gothic building in Transylvania: the Hunyad Castle (Castelul Corvinilor). Featuring fairy-tale towers, high buttresses and a charming drawbridge, it could serve as the set of a Game of Thrones episode any day.

Europe’s 2021 capital of culture, Timișoara is an important academic centre with plenty of lively terraces and cafés, a vibrant cultural life and stunning architecture. In the 19th century, the city became the first in mainland Europe illuminated by electric public street lighting.

One of the most important economic and cultural centres in the country, Cluj, as known among the locals, is the city of festivals par excellence: thousands of film lovers flock here every spring for Transylvania International Film Festival (TIFF), while in summer Untold and Electric Castle take over the city with late night parties.

The most visited Romanian village, Săpânța is home to one of the most unusual graveyard places in the world. Instead of somber gravestones, the Merry Cemetery features colourful, hand painted wooden plates that celebrate the life of the deceased with an illustration and an often witty poem.

The 15th-century Voroneţ Monastery is among the most spectacular of the eight painted monasteries of north Moldova included on UNESCO World Heritage List. The beauty of its Judgement Day fresco, painted in the typical Voroneţ blue has earned the monastery the moniker ‘Sistine chapel of the East.’ Accommodation in nearby pensions kept by locals is widely available, and visiting during Easter, you could even find accommodation at one of the monasteries.

The capital of the historic region of Moldova, Iași is home to the oldest and biggest art museum in the country, hosted in the majestic Palace of Culture. Add to that the charming botanical gardens, the Copou Park where national poet Mihai Eminescu used to wander and the first university in Romania, and you’ll have but a few of Iași’s many attractions.

The seaside city of Constanța has a history spanning 2,000 years, so a trip to the History Museum is mandatory. Stop for a drink or a meal in the city’s old centre and continue with a walk on the promenade, where the main attraction is the Casino, an art deco edifice of unparalleled charm adorned with shells and stucco flowers.

The last day of the road trip is reserved for Bucharest, the capital’s undisputed political, economic and cultural centre. Grab a coffee at one of the hip new places near Piața Amzei and continue with a visit at one of the many museums that dot Calea Victoriei. Nothing will prepare you for the stunning Palace of Parliament, the world’s heaviest building and second most expensive, after the Pentagon. Caru’ cu Bere, one of Bucharest’s oldest and most charming restaurants, is a fitting place to reminisce about the trip over a traditional Romanian dinner and a glass or two of ţuică.