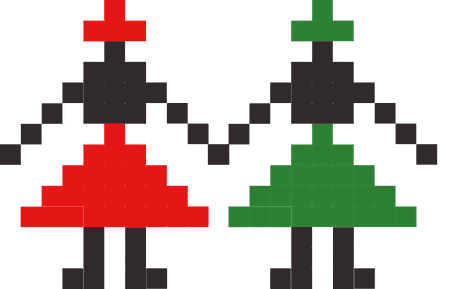 Traditional motifs, carefully sewn onto clothes, and weaved into rugs and carpets by talented hands and passed on from generation to generation through artefacts, everyday objects as well as architecture, have always been a cornerstone of Romanian folk culture. Of late, many Romanian designers are putting the country’s rich cultural heritage back into the limelight, bringing it closer to fashion lovers, using modern techniques and their fresh, personal take on millennia-old symbols.

Jewellery designer Mihaela Ivana’s pieces are a tribute to the uniqueness and refinement of Romanian folk motifs. By carefully stitching minuscule lines and dots, she makes you zoom in on the elements that, together, create the powerful and timeless symbols Romanians still resonate with.

Accessories designer Nicoleta Chirica is perhaps one of the designers to have best managed to elevate the primitive and raw folk symbols by alining them with the aesthetic of minimalism. On her bags and shoes the embroideries, in new and surprising colours, take centre stage and highlight a timeless cultural heritage, against the background of a design and texture with an unmissable contemporary air.

Take a look at our beloved Magpie, whose design exudes tranquility, purity and innocence ❤️🌸

Using digital printing techniques, designer Lana Dumitru turned clothes into wearable canvases for folk motifs and floral compositions found on traditional embroideries, as well as drawings taken from the Merry Cemetery of Săpânța, in Maramureș. One of the first young designers to spot the high decorative potential and bold colours of Romanian folk culture, her folk-inspired collections are a calling card for a brash and bold personality.

A post shared by MONICA BIRZAN FASHION DESIGN (@monicabirzan_fashiondesign) on May 31, 2017 at 2:08am PDT

In their collections, designers Andreea Batroș and Flavia Scînteanu from Dare to Rug reinvent the motifs typically found on traditional Romanian rugs and carpets by capturing their essence. Thus, they lend the carpet, one of the central pieces of any interior, a stronger layer of symbols by using modern techniques.

Designers Ana Bănică and Bianca Bărbieru of Cai Verzi pe Pereți take the most attractive folk motifs, as well as scenes from the fairytales many Romanian children fell asleep listening to, and enhance them by putting them on walls. Their colourful stickers range from minimalistic ensembles, such as those resembling traditional clothing pieces known as brâu, an embroidered belt, to fairies, unicorns, and full moons.

Ever since designing her graduation collection Andra Clițan has been inspired by the colourful folk costumes of Maramureș. She stays close to this fountain of inspiration by taking the folk motifs and putting them on clothes and accessories adapted to the personality of the daring and exuberant woman of today.

If there is a way to make clothes inspired by Romanian folk culture that are elegant and at the same time sensual, then Valentina Vidrașcu is mastering it. Her flowy silk tops inspired by traditional Romanian blouses bring a touch of sophistication to traditional folk motifs that is totally necessary if they are going to make the transition to evening wear.

Graphic designer Miruna Ștefănescu and architect Sergiu Simion launched Culture Soup back in 2012 and ever since have used timeless folk motifs in the most creative and playful way one could ever imagine. Their collections include t-shirts, clocks, mats, pillows, coasters, socks, and even temporary tattoos.

Illustrator Mădalina Andronic and designer Claudiu Ștefan are the creative duo behind The Awesome Project, a collection of porcelain jewellery and everyday objects decorated with traditional folk motifs found on costumes, carpets, and earthenware. Hand-painted on porcelain using underglaze colours and stoneware glazes, they also highlight traditional Romanian colour palettes, which include red, black, as well as Lipovan blue, as found on Danube Delta houses.

Architects Dana and Vlad Boștină created Vatra collection, which features tables, chairs and wall clocks made of wood and glass out of the “love and fascination Romanian traditional art, and in particular, wood crafting instills in us.” By adorning everyday objects designed to have harmonious shapes using materials with warm and natural textures with traditional motifs, the two managed to revive a long tradition and expose to it new generations of design lovers.