An Art Lover's Guide to Bucharest 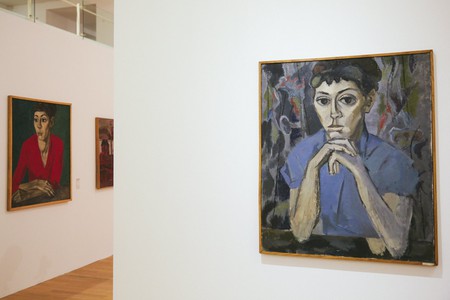 No, it’s not (just) the traffic. Bucharest is literally buzzing with the energy of new things happening every minute, and the city’s museums and art galleries are some of the most dynamic spaces in town. We’ve selected the best art museums and galleries you should visit while in Bucharest, as well as cafes and restaurants to pop by for a pit stop on your artsy trip.

The National Museum of Contemporary Art is the place to start exploring Bucharest’s art scene. Set within the Palace of the Parliament, a 1,000-room mammoth-sized building built by former dictator Nicolae Ceaușescu, the MNAC makes perfect use of the wide, open spaces. The museum’s exhibits feature some of Romania’s finest contemporary artists, and the venue regularly hosts shows for international artists as well. While the permanent collection includes a fair share of paintings, the museum’s highlights include highly original installations and video art. 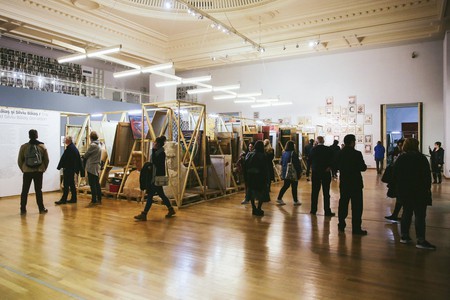 Insider Tip: The museum is located in the second-biggest administrative building in the world, so make sure you head straight to the southwestern side of the building and pick entry E4, at the opposite end of the entrance used for tours. Also, stop by for a drink at Okfea, the museum’s cafe found on the fourth floor of the building. It offers one of the most spectacular views over the city.

Housed by the former Royal Palace on Calea Victoriei, one of Bucharest’s most picturesque arteries, the Museum of Art Collections is your introduction to Romanian art, which has a strong tradition when it comes to painting. The museum’s National Gallery, in particular, is one of the highlights. It features works by the best known Romanian painters, namely Gheorghe Petrașcu, Alexandru Ciucurencu, Ion Andreescu, Theodor Aman and Nicolae Grigorescu. Works by Romanian sculptor Constantin Brancuşi, one of the pioneers of modern sculpture, are also on display. The section dedicated to medieval Romanian art, which features icons, original church altars and fragments of frescoes, helps to paint a rich picture of Romania’s cultural heritage for visitors. The European Art Gallery is also worth a visit, as it includes paintings by European masters like Rubens, Rembrandt and Monet. 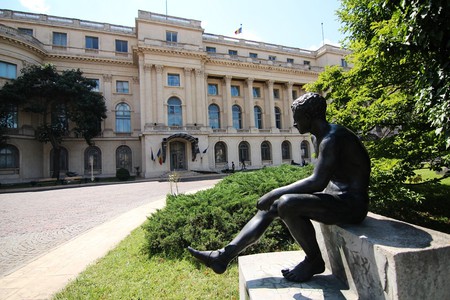 Insider Tip: As the museum is located in a beautiful former royal residence built in 1859 that preserves many original features, make sure to take a tour that will give you access to hidden areas. The recently opened royal living quarters and the splendid throne room are a bonus well worth taking a detour for. Tours are offered three times a day on weekends, and cannot be booked in advance. Just make sure you buy your tickets 15 minutes before the tour.

On a quiet street in one of the most picturesque parts of Bucharest’s centre is a charming house with a garden and a beautifully decorated interior. Each detail of the house speaks to the many talents of the Storck family. A family of artists, the Storcks have left a rich legacy of paintings, pastel and charcoal drawings, sculptures and amazing frescoes depicting nature scenes and feminine silhouettes. The collection, donated to the state by Cecilia Cuțescu Storck herself, includes hundreds of pieces of art.

Insider Tip: For other works by the illustrious Storck family, head to the Domniţa Bălaşa Church, where you’ll find a courtyard full of beautiful sculptures by Karl Storck. Moreover, at the Filipescu-Cesianu House, on Calea Victoriei, you will find at least one pastel drawing by one of the Storcks. If you look closely, handwritten on one of the walls is the definition of love. 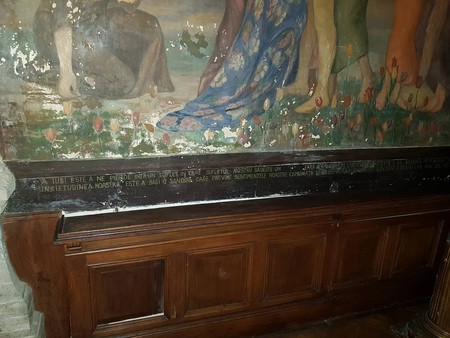 The definition of Love: "To love is to lose yourself in a soul" | © Oana Dumbravă

Run by the Romanian Association for Contemporary Visual Arts (ANAV), Gallery is a cafe, an art gallery, a venue for cultural events and a cultural hub all in one. Having welcomed more than 500 creators and hosted over 300 events in its three rooms, ANAV has a rich legacy and impressive reputation known throughout the city. With a preference for photography, Gallery is perfect for fueling your already art-themed conversation. 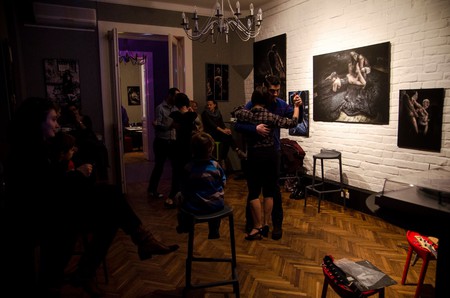 Within walking distance from Romana Square, M60 serves some of the best coffee blends in town, ground on the spot, as well as highly Instagrammable salads. With a clean and modern vibe, it resembles a cosy Scandinavian cafe in the middle of Bucharest, a surprising setting that makes you think of a living room away from home. On its walls you’ll see hanging art from some of the city’s most original visual artists and illustrators.

One of Bucharest’s leading galleries, Mobius has positioned itself as a platform for Eastern European artists to be seen by the international community. As part of its programme, the gallery regularly hosts artist talks alongside exhibitions and related events. Romanian artists that have exhibited here include Roman Tolici, Lea Rasovszky, Andrei Gamart, Anna Kohodorkovskaya, Sándor Szász and others.

Insider Tip. Check out their albums and publications; many are translated in English. 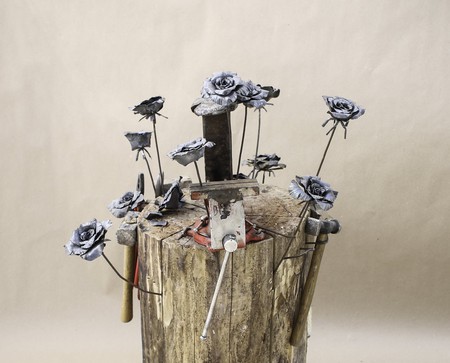 Located on the ground floor of the Central University Library Carol I, Galateca Gallery is a multidisciplinary art and design gallery that opened in 2012. The exhibitions by up-and-coming Romanian and international artists explore a variety of mediums, including cartoons, videos, paintings, drawings and installations.

Insider Tip. Check out the NeoGalateca Shop, a space that sells home and decor items, as well as objects from Romanian and international artists’ portfolios. It is one of the most original gift shops in Bucharest. 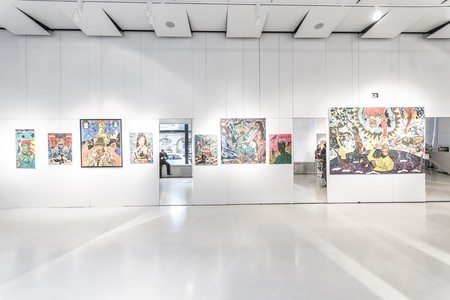 Opened in 2002 as the second private-run portfolio gallery in Romania, H’Art Gallery is one of the oldest galleries in the city and the country. Its focus is on young, up-and-coming artists that made their debut after the 1989 Romanian Revolution. The gallery highlights artists like Alexandru Paul, Ion Bârlădeanu, Stefan Triffa, Anca Muresan, Dumitru Gorzo and Vioara Bara.

Insider Tip: This gallery features self-taught artist Ion Bârlădeanu, who specialises in collages of political figures from Romanian history. After his work was discovered, he stopped living on the street and exhibited in Basel, London and Paris and was even the subject of the Emmy-winning documentary The World According to Ion B.

The organization Art in Bucharest offers art tours that will allow you to visit the homes and studios of local artists and enter their creative universes. The tours include visiting painters, weavers and ceramists. Perhaps the most enticing of them, the Art Tour in Pangratti, will give you the opportunity to explore one of the most beautiful neighbourhoods in Bucharest, dotted with historic villas. You’ll also be able to visit a local memorial house that hosts an impressive art collection. 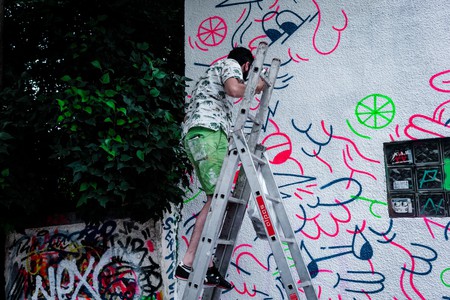 Serving French dishes with Basque influences and a Romanian touch like the ‘crispy-fondant’ Mangaliţa pork belly dish created by Chef Sébastien Gravé, Le Bistrot Francais has a strong art connection. The restaurant’s walls are covered in portraits and paintings by Romanian artists, highlighting the owners’ passion for art, while complementing the elegant setting of the historic villa, which was the former residence of the late French architect Albert Galleron. 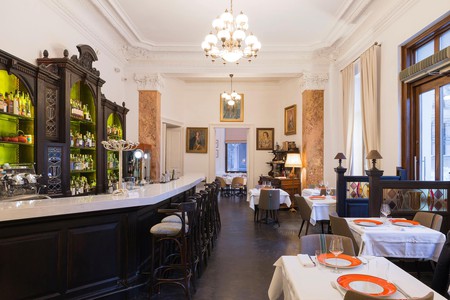 Colourfully decorated with a relaxed bohemian vibe, Mahala serves traditional Romanian food with a modern twist in a setting that showcases Romanian folk art. Its walls are covered in frescoes and illustrations depicting local traditions and crafts, and the backs of chairs and couches are covered in lively tapestries with traditional folk motifs. 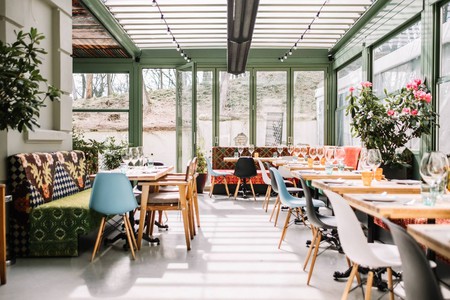