EUROPE
/
ROMANIA
/
BUCHAREST
/
Things to Do 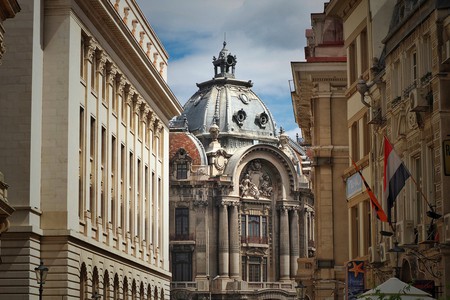 In Bucharest, every era, be it one of joy and exuberance, restraint or even despair, has left a mark on the city’s architecture. Peel back the layers of this city’s history while taking a walk among its most famous landmarks.

Bucharest has an astonishing architectural diversity, making it a playground of contrasts that sees the sensuous curves of 19th century architecture blend in an original, if not always seamless, manner with the severe lines of Stalinist architecture, a remnant of the country’s communist years.

While the latter is immediately apparent, elsewhere treasures are hidden for the curious gaze. Visitors strolling around the city’s central areas in particular will uncover elegant window and door arches, playful towers and turrets and many edifices that breathe old charm and elegance. 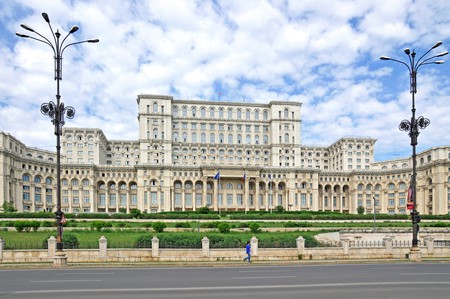 Start your walking tour of Bucharest in the city center, with a visit to the Palace of the Parliament, which also hosts the National Museum of Contemporary Art. Also known as the House of the People, the name given to the 1,100 room colossal structure by its mastermind, Communist ruler Nicolae Ceaușescu, it was built in just five years, starting in 1984. The chief architect, Anca Petrescu, was only 28 years old when she took on the project, together with a team of 700 architects. At a height of 84 meters and placed on a hill, it dominates Bucharest’s skyline with its presence.

Along with being the second-biggest administrative building in the world, it is also the most expensive. And as expected from a palace, once you enter it you will discover that the bare look of concrete gives way to luxurious but formal interiors such as halls decorated with wood and marble lit with crystal chandeliers and floors covered in mosaics and carpets. 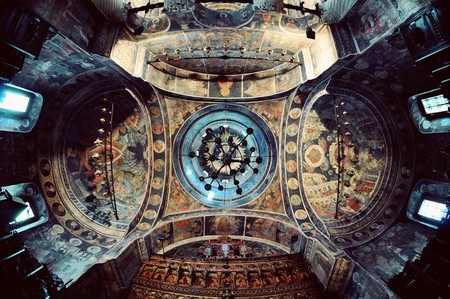 Situated over the Dâmbovița River, in Bucharest’s old center, Stavropoleos Monastery is a nunnery which brings a contrasting touch to the tour, situated in the city’s party district, full of loud bars and terraces. Erected in 1724, and featuring beautiful hand painted frescoes, it is built in Romanian Brâncovenesc style, a 17th century blend of late Renaissance, Byzantine, Ottoman and Baroque styles. Take in the holy atmosphere and rest in its cozy and picturesque patio and, if you happen to step by during choir rehearsals, or mass, immerse yourself in the hypnotizing sound of Neo-Byzantine music, a rarity in Romanian Orthodox churches. 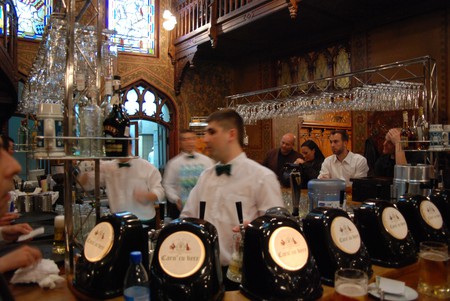 Located on the same street Stavropoleos Street, Caru’ cu bere (‘The Beer Wagon’), is a totally different type of establishment. One of the oldest restaurants in Bucharest, it was opened in 1899 in the current location, a Gothic revival building designed by Austrian architect Siegfrid Kofczinsky. Apart from its extensive selection of dishes representative of Romanian cuisine, the establishment is known for its Art Nouveau style interior. Richly decorated, the ground floor features Gothic arches and a display of paintings by painters Wilhelm and Friedrich Hugo, as well as stained glass and sculpted wood panels. Stop for a beer or a meal here and take in the building’s history. 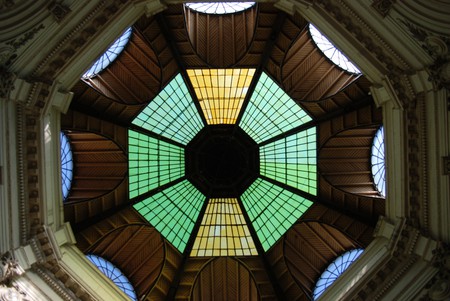 Head a few streets down to visit the Macca-Vilacrosse Passage and walk the fork-shaped yellow-tinted arcaded street dotted with restaurants, bars and terraces. Bearing the names of the former Chief Architect of Bucharest, Catalan-born Xavier Vilacrosse and of Mihalache Macca, simply the builder’s brother-in-law, it hosted the first Stock Exchange House of Bucharest. Enter it from the Old Center and exit onto Calea Victoriei, one of Bucharest’s main arteries. 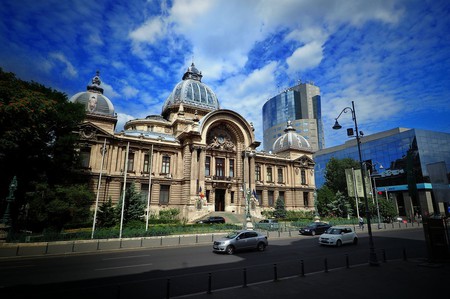 Completed in 1900, CEC Palace hosts the headquarters of Romania’s oldest bank. Built under the supervision of Romanian architect Ion Socolescu, it was designed by Paris-educated architect Paul Gottereau. Topped with a glass and metal dome, it is built in eclectic style, and features gables and coats of arms on its four corners that end in Renaissance domes. 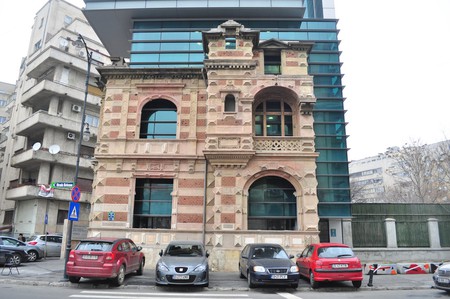 Continue on Calea Victoriei, passing the historic Casa Capsa restaurant frequented throughout the ages by the city’s literary elites, and head towards Revolution Square. Before entering it, notice 300-years-old Kretzulescu Church with its bricky exterior, on the lefthand side, and then the National Museum of Art of Romania, the formal residence of Romanian monarchs. Take the righthand side, alongside the Central University Library to snap a shot of a building that perhaps symbolizes best the city’s architectural contrasts.

The lower part incorporates a 19th century French Renaissance structure, which before World War I hosted the Austro-Hungarian Embassy. Its derelict state is due to an attack of the Romanian army during the 1989 Revolution, acting on tips the building might be hiding instigators. The top of the building, however, belongs to the present era. The glass and steel tower was built in 2003 by architects Dan Marin and Zeno Bogdănescu and now hosts the headquarters of Uniunea Arhitecților din România, the Romanian architect’s union. 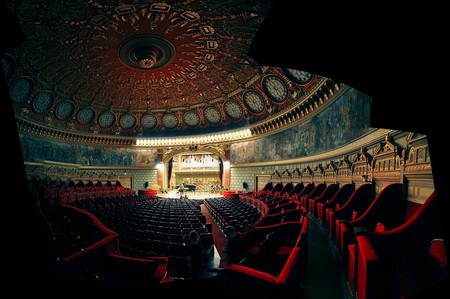 Located just a few minutes away further on Calea Victoriei, behind a square bearing the name of George Enescu, the acclaimed Romanian classical music composer, the Romanian Athenaeum is one of the city’s major landmarks. Designed by Albert Galleron, the ornate circular building resembles a temple. It is topped by a dome, richly decorated on the inside, bordered by a 70-meter-long fresco depicting the most important episodes in Romanian history.

Historically, it is important because it was here that the conference that led to the unification of Romanian provinces of Transylvania, Bessarabia and Bukovina with the Old Kingdom to constitute Greater Romania in 1918 was signed. Nearby you will find plenty of restaurants, such as Caju by Joseph Hadad, Le Bistrot Francais, and French Revolution, serving the best éclairs in town, as well the charming Mara Mura, arguably one of the best bakeries in Bucharest. 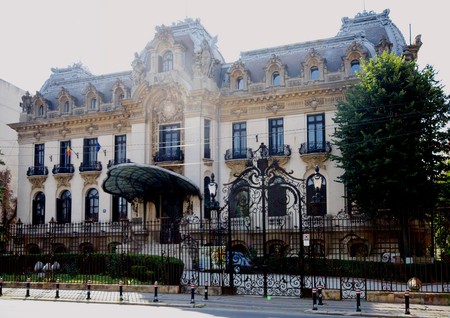 One of the most beautiful Art Nouveau buildings in Bucharest, the George Enescu Museum charms visitors with its beautifully adorned façade and oyster-shaped glass entrance. It was designed by Ion D. Berindei, a Paris-educated Romanian architect who left his mark on the architectural heritage of the capital. As you continue to walk, you will bump into one of the best-preserved buildings of La Belle Époque, and a former residence of Bucharest’s aristocratic families. Step inside and you will visit the museum of ages, an original anthropological initiative that illustrates how one day in the lives of the city’s inhabitants could have looked like, throughout the ages. 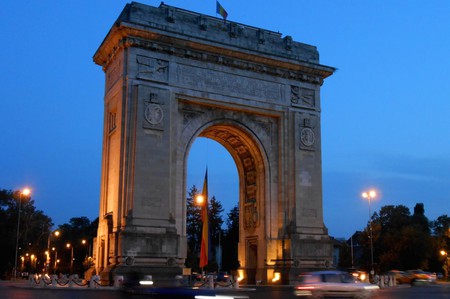 Continue walking and, passing via Victoriei Square, home on the right-hand side to the Victoria Palace, the seat of the Romanian Government, and take Pavel Dimitrievici Kiseleff Street. You will see the Antipa Museum of Natural History, the Museum of the Romanian Peasant and, on the opposite side, the Museum of Geology, before reaching another iconic Bucharest landmark, the Arch of Triumph.

Built in 1936 to commemorate Romania’s participation in WWI, the Romanian twin of France’s Arc de Triomphe de l’Étoile is a reminder of the days when Bucharest was called ‘Little Paris’. With a height of 27 meters, it was made with marble from Rușchița, west of Romania and decorated with sculptures by the best sculptors of the interwar period. Today, it has become one of the spots where brides are taken to when they are ‘kidnapped’ during their wedding party, a custom present in several countries in the area. So do not be surprised if you see a bride or two! 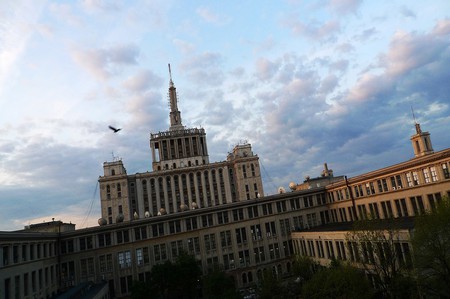 This last landmark on the architectural walking tour of Bucharest is another reminder of Romania’s Communist years. A typical example of Stalinist architecture, it was modeled after Moscow State University, and for a long time hosted the headquarters of the official newspaper of the Communist Party, Scînteia (‘the spark’ in Romanian). An original touch added to the building is represented by the decorative elements it features, inspired by the Romanian monasteries of Curtea de Arges, Cozia and Horezu.