A Tour of the Ancient Fortresses in Romania's Dobrogea Region 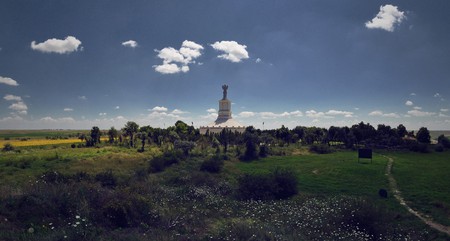 Out of all the regions in Romania, Dobrogea, in the southeastern part of the country, is the most mysterious. Its fate began with many ancient communities settling in it over the years. Throughout the ages, Greeks, Romans, Persians and many migratory people lived here and left their mark on the land. These marks included several fortresses and citadels that are still standing today. We’ve created a tour through these monuments to learn more about the region.

Starting in the seventh century BC, Greek colonists entered fruitful economic partnerships with the local Geto-Dacian population on the western shore of the Black Sea. This was the beginning of the first three colonies. Histria, located on the shore of Sinoe Lake in the territory of today’s Constanța county, was the first. It has witnessed significant prosperity over the last millennia. Today, you can visit the site as well as a museum with exhibits of columns, amphoras, statues and coins that are more than 2,000 years old.

Built by Greek colonists in the fourth century BC, after an oracle had predicted good omens for the location, Callatis lived up to the prediction and even exceeded it. It provided a great standard of living due to fertile soil, strategic military positioning and access to the sea and a fresh water lake. It was so productive that it even lent money to Rome in the first century AD. It also concluded a peace treaty with Rome, which is the oldest document in Latin known in Eastern Europe. The walls surrounding the Callatis fortress, as well as a Roman edifice, can still be seen from the city of Mangalia.

Argamum is the oldest settlement in Romania to have been mentioned in an ancient source. Located in Tulcea county, along the coastline, Argamum was built by Greek colonists in the 7th century BC, but experienced lasting prosperity after being taken over by the Romans. Under Roman jurisdiction, it became a port of call for merchants travelling on the Bizant – Tyras route. Most of the city is still found intact underground. The site, covering around two hectares (about five acres), includes defensive walls, building foundations, several streets and several pre-Christian churches.

Enisala is one of the most picturesque fortresses in Dobrogea. In fact, it is the only medieval fortress that is still intact in this region. Enisala was built by the Byzantine and Genovese rulers at the end if the thirteenth century, and included later in the defensive system of Walachia.

During its heyday, the fortress played an important role in allowing Genovese traders to monitor traffic on the Black Sea and keep an eye on the competition. Later, it was transformed into a base for an Ottoman Empire garrison. Due to the beautiful natural setting and views over the Razim and Babadag lakes, Enisala attracts many tourists, especially on the weekends.

Capidava, an important urban and military centre for the Geto-Dacian community, saw many periods of development under Roman and Byzantine rule. During its first glorious period under Roman rule, Capidava was the residence of the powerful King Dapyx. It played a very important military role as it was part of the defensive line along the Black Sea. It was during this time that the centre was mentioned as a stop on the Roman road from Axiopolis (today’s Cernavodă) and Hârșova.

Today, tourists visit the site to walk among its defensive walls, fortified gate and tower, fort and other previously inhabited buildings erected around the square. Visitors that plan enough time can also explore other remains, such as canals and ancient ditches.

Tropaeum Traiani was a settlement established by Emperor Trajan and was first mentioned as a city in 170 AD. The complex includes a fortress, a basilica and the spectacular Tropaeum Traiani monument. The fortress, with walls that encircle 10 hectares (24.7 acres), has an irregular shape and towers of different heights.

Of all the components that make up the majestic basilica in the complex, modelled after one uncovered in Pompeii, only 18 fragments of the columns remain. But the most outstanding piece of the ensemble, which attracts crowds of tourists year round, is a circular monument that was built to celebrate Trajan’s victory over the Dacians in the wars of 105-106 AD. Rebuilt in the 1970s, the monument features battle scenes and a trophy standing 10 meters (32 feet) tall shaped into armour and four cylindrical shields. A museum nearby contains the original statue, numerous ceramic artifacts, sculptures and more.

The ancient Geto-Dacian settlement of Dinogeţia, which was later transformed into a fortress by the Romans, was so important, it was mentioned by Ptolemy. A thriving centre of civilization during the reign of Constantine the Great, Dinogeţia continued to thrive under successive emperors.

During Antiquity, it acquired a major defence role for the Roman province. Although the site was badly damaged during the barbarian invasions, as well as during the medieval period, the remains can still be visited today. You’ll be able to see the praetorium, ruins of a large house and ruins of a Roman bath, among other structures.