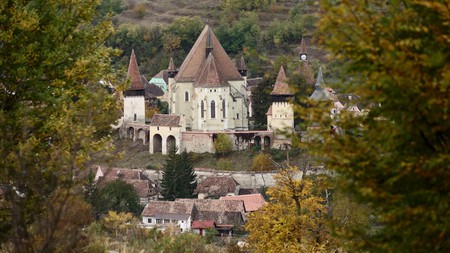 Romania is home to no less than eight UNESCO World Heritage Sites. Ranging from natural sites, such as the Danube Delta and the Primeval Beech Forests of the Carpathians to cultural landmarks like the painted churches of Moldavia, these sites are places that everyone should see at least once in their lifetime.

With their elegant tall towers and massive roofs, the wooden churches of Maramureș stand out among neighbouring buildings and embody an architectural style that has long since passed. Built between the 17th and 19th centuries, they were a solution for the followers of the Christian Orthodox faith, who were prohibited from building stone churches, a rule imposed by the Catholic Austro-Hungarian authorities. The churches’ interiors are now adorned with beautiful biblical scenes painted by local artists, while the walls and windows highlight the craftsmanship of woodcarvers. Out of the approximately 100 churches still standing, eight were included on the world heritage list in 1999 and are open to visitors: They are Bârsana, Desești, Plopiș, Budești, Ieud, Rogoz, Poienile Izei and Șurdești.

Dacian Fortresses of the Orăștie Mountains

The six Dacian Fortresses of the Orăștie Mountains, located in Transylvania’s Hunedoara and Alba counties, were once the nucleus of the Dacian Kingdom. Built between the first century BC and first century AD, they formed a defensive ring around the Dacian capital, Sarmizegetusa Regia. Exhibiting an original mix of religious and military building techniques, they show a picture of a rich, vigorous and advanced civilisation that enjoyed a surprisingly high standard of living. For instance, despite living on a mountain plateau at an elevation of 1,200 metres (3,900 feet), the inhabitants of Sarmizegetusa Regia used a water distribution system built with ceramic pipes. At this particular site, archaeologists uncovered several spectacular Dacian gold bracelets with complex functions not yet fully understood. You can visit these sites and look at the findings at Bucharest’s National Museum of Romanian History.

Built in the 12th century by German merchants known as the Transylvanian Saxons, Sighișoara has played an important commercial and military role in the region for several centuries. One of the few medieval citadels in Europe that was continuously inhabited, it features a historic centre with high turret houses decorated in colourful facades and winding cobbled streets that haven’t changed in 800 years. The birthplace of Vlad the Impaler, the historic figure associated with Dracula, it is a must-visit for fans of the count. Nearby, in Hoghilag, the locals celebrate the fragrant tuberose, traditionally grown by the Saxons, by throwing a yearly celebration in the summer.

Due to its outstanding biodiversity and complex history, the Danube Delta is nothing short of a world treasure. Home to over 300 bird species, the Danube Delta is the largest continuous marshland in Europe and features the greatest stretch of reed beds in the world. Lying on the Black Sea coast in Tulcea County in eastern Romania, the Danube Delta stretches between the rivers Chilia, Sulina and Sfântu Gheorghe, as well as the Razelm-Sinoie system of lakes. It is the second largest delta on the continent, hosting 12 types of habitats. A true paradise for nature lovers, the Danube Delta is the best preserved delta in Europe and is home to charming villages like Sfântul Gheorghe (home of a famous film festival and a culinary hotspot).

The painted churches of Moldavia, in northern Romania, are considered unique masterpieces of Byzantine art. Their interior and exterior walls are covered in exquisite, brightly coloured frescos dating from the 15th and 16th centuries. Depicting biblical scenes, such as portraits of saints, the life of Jesus and the final judgement, the paintings were meant to make the teachings of the bible more accessible to the village people, who did not have access to the bible. Also, due to the fact that the churches were too small to accommodate the large number of worshippers, patrons would congregate along the outer walls, and the paintings would keep them connected to the religious ceremony taking place inside. All eight painted churches, Arbore, Moldovița, Humor, Pătrăuți, Probota, Suceava, Voroneț and Sucevița, are open to visitors.

Primeval Beech Forests of the Carpathians

Romania’s second natural site that received world heritage status is a shared one. Spanning over 12 European countries, the site celebrates the important natural heritage of the European beech tree, which spread across the continent in a matter of a few thousand years. The site is located in the Carpathians and includes 10 massifs (compact groups of mountains) that start from the Rakhiv Mountains in Ukraine and end in the Vihorlat Mountains in Slovakia. In addition, the Primeval Beech sites in Germany are located in five different places throughout the country.

One of the most important religious sites in Romania, Horezu Monastery was built in 1690 in Vâlcea County by Prince of Wallachia Constantin Brâncoveanu. Brâncoveanu is considered an important historical figure and is remembered for the rich cultural relics he left behind, such as religious and laic (non-clerical) buildings. Featuring an original combination of local Neo-Byzantine architectural styles with influences of the Italian Renaissance, the monasteries are seen today as representatives of the Brâncovenesc style. The Horezu Monastery was added to the UNESCO World Heritage List in 1993, due to the intricate craftsmanship of its works of art and sculptures, as well as the outstanding treatment of its religious compositions.

Villages with Fortified Churches in Transylvania

Another major symbol of the Saxon cultural heritage in Transylvania, The Villages with Fortified Churches were a unique result of very particular historic circumstances. Today they are an open-air medieval museum to teach visitors about architecture built between the 13th and 16th centuries by the Saxon community. At the time, the Saxons had a privileged status within the Austro-Hungarian empire.

Because they were built on various migration routes, the villages were constantly exposed to invaders searching for grains and other valuable goods. In response, the locals fortified the churches, usually built in the middle of the villages, with protective walls and dedicated chambers that would host a large number of villagers and their goods. Out of UNESCO’s seven Villages with Fortified Churches, the most spectacular ones are in Biertan, Viscri, Prejmer and Valea Viilor. But the others in Câlnic, Dârjiu and Saschiz are equally worthy of a visit.