A Tour of Romania’s Best Castles and Fortresses 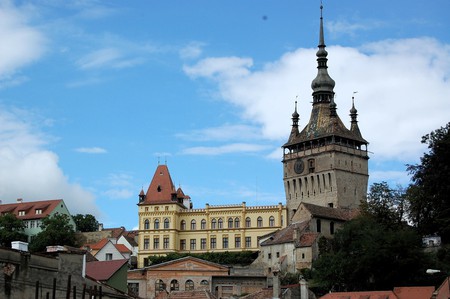 Known for its wild and spectacular nature, Romania is also home to a large number of castles and fortresses. Scattered throughout the country, along the plains along the Black Sea or perched up on hills and mountain tops, they are witnesses of the tumultuous events that shaped the development of the country, a space with a particularly diverse and rich history.

Bran Castle, perhaps the Romanian castle best known abroad, is one of the most popular landmarks in the country due to its association with the legend of Count Dracula. Perched up on a cliff surrounded by hills covered in thick forests, with its beautiful red-tiled towers and turrets, it conjures up a mythical past and exudes mystery. Step inside, however, and you will discover a domestic vibe sue to the plenty of cozy interiors adorned with furniture and art collected by one of Romania’s best-loved royal figures, Queen Marie of Romania. But whatever reason you may have for your visit, you’re never at a loss.

One of the most famous and beloved castles in Romania, Peleș Castle is a jewel of Neo-Renaissance architecture with a unique charm. Built by the country’s monarch Carol I, after he fell in love with the scenery of the quaint city of Sinaia, it welcomes visitors with richly-decorated interiors and nearly 200 rooms hosting a large collection of art and unique artefacts. Explore the Florentine, Moorish, Turkish, and French Rooms, and take in the exquisite attention to detail and unique and varied textures that went into the eclectic decorative objects from all over the world.

Gothic architecture fans and medieval history buffs will have a great time visiting Corvin Castle, near Hunedoara. Built in the 15th century by Ioan de Hunedoara, or John Hunyadi, on a rock near the Zlaști river, it covers 7,000 square meters and has 42 rooms. One of the largest castles in Europe, it features a double wall and tall rectangular and circular towers, several of which were used as prisons, bastions, a large inner courtyard and picturesque balconies and windows. The bridge used to enter the castle is impressive and gives it its unmissable fairytale charm.

Built in the 18th century nearby the city of Deva, the Deva Fortress is one of the most spectacular fortifications in Transylvania. Erected on a site inhabited since prehistoric times, the fortress sits on an extinct volcanic cone with a height of around 400 meters. Under the brief administration of Transylvanian ruler Ioan de Hunedoara, it later became a symbol of the resistance, as the only such fortress that remained unconquered after Oradea was occupied by the Ottomans. In the 19th century, the fortress was destroyed after a warehouse containing ammunition blew up, but the locals built it back up. Starting a few years ago, the fortress was included in a program aimed to restore it back to its former glory.

The only medieval fortress still standing in the south-eastern region of Dobrogea, Enisala was erected by Genovese merchants and Byzantine rulers in the 13th century. The former were the ones who took most advantage of the fortress’s location, by using it as a point of observation which allowed them to monitor the flow of ships that sailed into the region and maintain their monopoly on sailing on the Black Sea. An important cultural, economic and military centre, the fortress played a major military role after being included in the defensive system of the region of Walachia. Today, its setting attracts many visitors who take in the views over lakes Babadag and Razim.

Located in the village of Miclăușeni, approximately 65 kilometers from Iași, the Sturdza Castle was built at the turn of the 19th century by local nobleman Gheorghe Sturdza and his wife Maria. A jewel of Neo-Gothic architecture, the Sturdza Castle is adorned with towers ending in flèches, and its crenellations, rosettes, and ogives, as well as the woodwork by the windows and doors are all touched by Neo-Gothic influences. The interior paintings are by architect Iulius Reinecke, with the help of the lady of the house. After being used as a military garrison during WWI and again a military warehouse in the 1960s, and later an orphanage, the furniture and unique decorations suffered some damage. However, after a decade of restorations, the castle is once again open to the public and serving its purpose, to prove, in line with the family’s motto, that ‘Beauty shines everywhere.’

Sighișoara Fortress comprises the entire old centre of Sighişoara, one of the most charming citadels that was continuously inhabited in Europe. Established in the 12th century by Transylvanian Saxons, the name given to German merchants who lived in the area, Sighişoara is also the birthplace of Vlad the Impaler. The fortress was erected in 1280, a time when its walls were as tall as 14 meters, and had a length of 930 meters. Out of the 14 towers, only nine are still preserved today, including the picturesque 64 meter-tall clock tower built in the 13th century.

The biggest and best-preserved Vauban fortress in this part of Europe, Alba Carolina Fortress in Alba Iulia was built in the 18th century. Featuring seven basions, and stretching over 12 hectares, it features seven gates adorned with sculptures, statues, and stone works. Its most important military role was that of protection against Ottoman Turks’ invasion. Set aside around two hours to explore on foot the paths and alleys and climb the elevated terraces to take in the panoramic views. And if you drop by in time for the change of guard, make sure to have your camera ready.

Built on a rocky hill, surrounded by forests, Râşnov Fortress consists of a fortified ensemble built by the locals. Spread over 3,500 square meters, it has a simple architecture, with tall walls and features towers used for defence purposes. The interior of the fortress is structured in a way that is typical for fortresses built by peasants in this area, and includes stone houses where the inhabitants lived, protected from invasions. Impressively, inside the fortress there is a 150 meter-deep well, which provided the locals with water during sieges.

Built at the end of the 14th century, Făgăraş Fortress is considered one of the most beautiful in Romania. Found on the road that connects the cities of Braşov and Sibiu, it is one of the best preserved such edifices in Europe. In recent history, the fortress was chosen as a place of detention for political prisoners during the harsh years of the Communist regime. Today a museum, the fortress has 66 rooms and a 10-strong guard corps that wears costumes inspired by the original attire.