A Guide to Visiting the Painted Churches of Moldavia

EUROPE
/
MOLDOVA
/
Things to Do 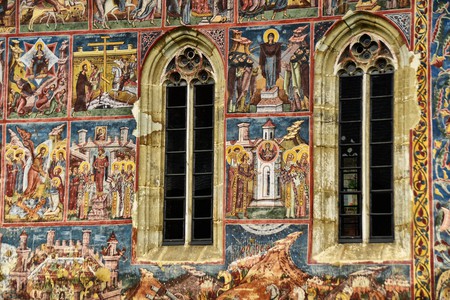 Covered in brightly coloured frescoes dating from as far back as the 15th century, the eight painted churches of Moldova are listed as UNESCO World Heritage Sites. That is why visiting them can be an aesthetically pleasing experience, as well as one that will bring you closer to Romanian history, culture and traditions. Here are some rules you should follow while there.

History of the churches

The painted monasteries of Moldova are some of the most remarkable examples of religious art in Romania. Built between 1487 and 1583, they are covered inside and out by beautifully decorated frescoes illustrating religious scenes in a unique style.

Built in the village of Arbore, first mentioned in documents in 1418, the Beheading of St. John the Baptist Church was erected in 1503 by local nobleman Luca Arbore. The paintings on the outer walls are very well preserved and include a unique scene: the Battle of Constantinople, which cannot be found elsewhere. Also, here you can find the most remarkable Gothic funeral stone in the region of Bucovina, on the tomb of the church’s creator.

The other four monasteries were erected by local rulers Stephen the Great (1457-1504) and his son and successor Petru Rareș, (1527-1538, 1541-1546) and they were destined to celebrate their victories in battles against the Ottoman Turks and other invaders. St. George Church, also known as Voroneț Monastery after the village in which it is found, was built by the ruler of Moldova Stephen the Great after his win over the Turks in the Battle of Vaslui. The church was erected as a pledge to his close advisor, a hermit named Daniil, in less than four months. This is the best known of the eight churches, and a must-visit due to the quality of its paintings. 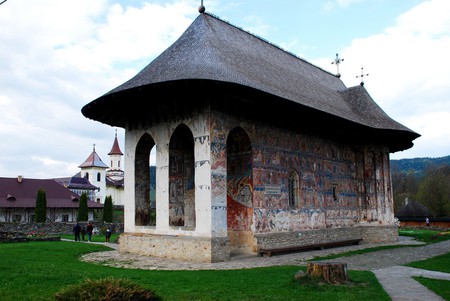 Moldovița Monastery, built by Petru Rareș, was meant to function as a protective barrier against the Ottoman Turks. What sets it apart from the other churches is the fact that it features an open porch, as well as windows and doors built in the Gothic style. Also built by Petru Rareș, the Humor Monastery, dedicated to the Dormition of Virgin Mary, is one of the best preserved and most visited, alongside Voroneț. Just like in the case of Moldovița Monastery, the paintings were made by local master Toma of Suceava.

Why are they painted?

Combining Byzantine painting traditions with elements of the local peasant aesthetics, the frescoes painted on the churches’ outer walls were at the time the simplest means of illustrating the Bible for everyone. Rich in details, the imagery includes the highly expressive figures of saints, apostles and martyrs, as well as plenty of angels and demons. All of the churches were painted using the highly demanding fresco technique, which required that painters cover very large surfaces in a short time with a steady hand before the plaster dried. 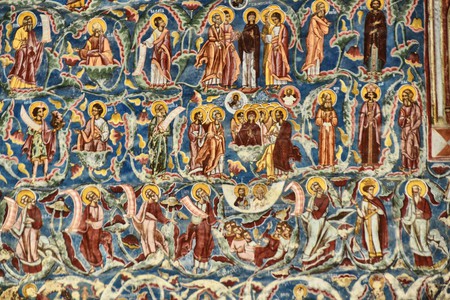 Similar in importance for Romanian religious painting as the Sistine Chapel is for Italy, the highly elaborate frescoes on Saint George’s Church, in Voroneţ, for instance, stand out among the eight. Painted using a bright blue pigment, Voroneţ blue, whose composition has remained a secret to this day, the Final Judgement scene attracts most visitors.

Apart from being important places of worship, the churches have a strong link to the history of Moldova. They speak of the region’s troubled past, which involved many battles with invaders that jeopardised the community’s very existence. Were it not for the victories against them, the churches may not have existed. Implicitly, they reflect the stronghold Christianity had in the community. Very strong believers, the rulers of the land would conjure up God when facing hordes of invaders and then vowed to build churches to celebrate wins. 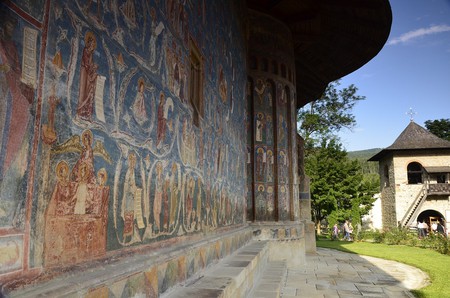 The paintings themselves, all made by local craftsmen, are an illustration of the tremendous skills of artists in the region. The fresco technique, used for both the inside and the outside walls, were made by highly skilled teams. While the apprentices were tasked with drawing background elements, the masters would be in charge of the faces, hands and all other more important details of the paintings. Moreover, at the time painters needed to be chemists, too, and for these frescoes, they used azurite and malachite pigments to created vivid blue and green hues that dominate the palette.

How to visit the painted churches of Moldavia

Found at different locations in Suceava County, they are easy to access due the relatively small distances between them. The list of eight painted churches includes the Beheading of St. John the Baptist Church, Dormition of the Mother of God Church, Annunciation Church, Exaltation of the Holy Cross Church, St. Nicholas Church, St. John Church, St. George Church, and Resurrection Church.

The churches are easily accessible from both Suceava and Iași, which have airports connecting them via daily flights to Bucharest. In addition, rail connections and buses are also available. Suceava in particular, offers several tours of the monasteries, so you can make your choice on the spot. 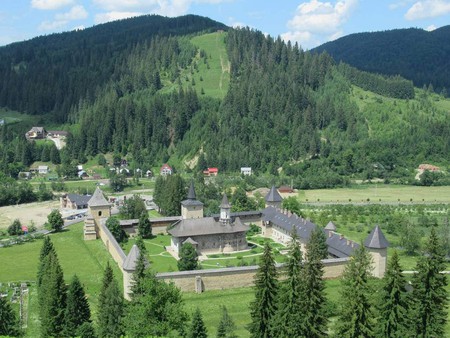 While it is possible to see all eight monasteries in one day, giving the area two or even three days sounds more appropriate. For those looking to set a home base, Gura Humorului, located 39 kilometres (24 miles) from Suceava offers plenty of accommodation options.

Although they are important places of worship, several with an active monastic life, the painted churches of Moldavia are tourist-friendly places. Still, there are some rules to be observed. First, visitors should wear appropriate clothing, even in summer. This means your shoulders and (if possible) head should be covered for women, and everyone should wear below-the-knee garments. Moreover, all visitors should remain and communicate with the monasteries’ inhabitants only in the areas open to visitors. Not least, you should remain quiet inside the church and within monastery walls and avoid taking flash photography.